A couple of weeks back we took a look at the origin of Sargeras and the Eredar. This week, we pick up with Sargeras’ first assault on Azeroth, the War of the Ancients. This conflict changed the face of the world forever, splitting the primeval continent of Kalimdor into four pieces (that we know of) — modern Kalimdor, Northrend, the Eastern Kingdoms and Pandaria. It also created the Maelstrom, the enormous vortex at the heart of the ocean that churns to this day (and which was used by Deathwing to help him breach the barrier between Deepholm and Azeroth). And yet, despite the chaos and havoc of this ancient war, it must be remembered that it was a victory for the ancient people of Azeroth. Had the Legion succeeded in its aims, there would be today not a remnant of life on the entire globe.

This must be emphasized. The goal of Sargeras and his Legion is the extermination of all life — the utter destruction of all the works of the Titans, as they seek to order creation. As terrifying as the Scourge is, the Lich King paled in true evil and madness when compared to the Legion. Indeed, the Scourge wouldn’t even exist if not for Kil’jaeden.  And we are not so easily rid of the archfiends of this host of evil – slain in our world, demons reform in the Twisting Nether. 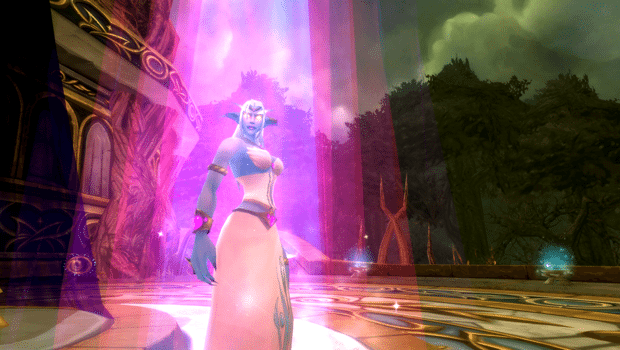 The War of the Ancients begins

What we know is as follows — Sargeras’ attention was fixed on Azeroth when the ancient Highborne mages, led by Xavius, began to probe the Twisting Nether via the Well of Eternity, a font of pure arcane power which could be channeled and used to achieve near-miracles. Xavius was no match for Sargeras — his will collapsed before the Dark Titan in an instant — and even Queen Azshara, as powerful as she was beautiful (and she was powerful enough to threaten even Mannoroth himself) found in Sargeras an irresistibly attractive force.

The Highborne were the effective ruling class of the ancient Kaldorei empire, and they thought of themselves as a step above their fellow night elves even before Xavius made contact with Sargeras. It didn’t take much to corrupt them to the service of the Legion, and soon Azshara and her Highborne were working feverishly to create a portal and bring Sargeras through into Azeroth physically. Make no mistake, had this occurred, Azeroth would likely be dead right now. As terrifying as the demons who did come through were — Mannoroth, Hakkar the Houndmaster, Archimonde himself — none were even a fraction of the power of the Dark Titan. Amazingly, despite the near-total corruption of the Highborne and their own queen, the night elves managed to rally against the Legion and behind such figures as Tyrande Whisperwind, Jarod Shadowsong, and Malfurion Stormrage even fought them back.

During this invasion, the black dragon aspect Neltharion turned against the other dragonflights and attempted to use the power of the Dragon Soul artifact to conquer his own kind instead of using it to fight the demons, thus taking the dragon aspects and their undeniable power out of the equation. For this act of treachery, and the horrible destruction of his body caused by the use of the artifact, Neltharion became known as Deathwing. The other dragonflights suffered as well — the blue dragons were nearly annihilated by the unleashed power of the Dragon Soul, and Alexstrasza was shocked by the betrayal of one of the aspects — but the loss of the dragon’s power (they had been placed on Azeroth to defend it from any attempt to alter the Titan’s plans for the world) was a dire blow against Azeroth’s attempt to defend itself. 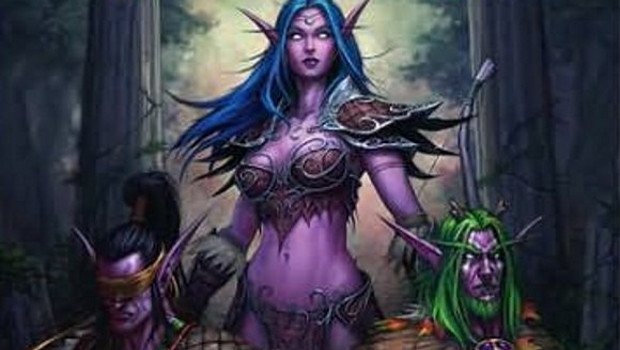 To save their world they would destroy it

In time, however, a plan took shape. The Well of Eternity was the means by which the Legion was entering Azeroth. In order to stop the invasion, the Well had to be denied them. Malfurion came up with the plan to destroy it, but his brother Illidan had been playing both sides against the middle — working first with the night elves defending their world, then accepting a boon of power from Sargeras himself that would transform him into the scarred, tattooed demon hunter we would more easily recognize today. He realized that with the destruction of the Well, the magic he craved and lusted after would be gone as well. Rather than allow this to happen, he took seven vials from the Well. These vials in time would become the genesis of a new Well of Eternity atop Mount Hyjal.

Thanks to the intervention of three time travelers — the human wizard Rhonin, the red dragon Korialstraz and the orc warrior Broxigar the Red — Sargeras was prevented from stepping through the portal generated by the Well’s energies, while the Old Gods that sleep beneath Azeroth’s surface (and which had driven Neltharion mad, causing his transformation into Deathwing) were also balked in their attempt to seize the portal for their own use. Ultimately, Malfurion did indeed destroy the Well.

The destruction of the Well caused the Sundering of Kalimdor into the modern continents of Azeroth. The destruction was monumental. As most of the night elf empire was built around the edges of the Well of Eternity, it sank to the bottom of the ocean or was simply destroyed by the forces unleashed. Those few Highborne who survived had either abandoned Azshara and fought against the Legion, or hidden themselves in distant places such as Eldre’thalas, and thus night elf society was left leaderless even as Azshara and her most loyal Highborne were transformed into the fiendish naga. 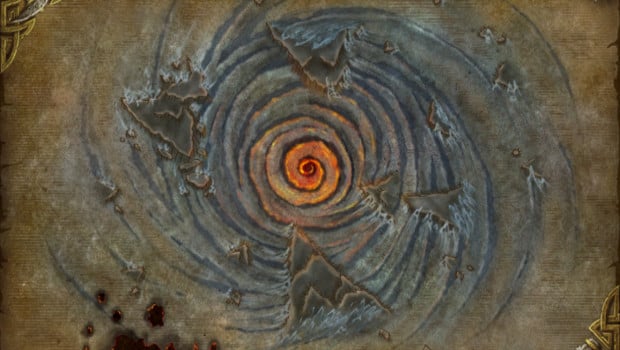 The world had changed drastically in the wake of the Sundering. The Pandaren Empire had sealed itself away behind impenetrable mists, and would remain isolated from all Azeroth until some ten thousand years later. The trolls of the Zandalari, once allied to the Mogu who had been overthrown by their Pandaren slaves, found themselves carved away onto an island called Zandalar Isle, just barely preserved by their magics. The Amani and Gurubashi empires which had fought wars with the insect Aqir were likewise scattered by the devastation, both finding themselves on the Eastern Kingdoms. The night elves were shocked and horrified to discover that Illidan had seeded the waters atop Mount Hyjal with the essence of the old Well of Eternity that had drawn Sargeras’ attention in the first place, and chose to imprison him for his last act of betrayal. This imprisonment became permanent when the remaining dragon aspects offered the night elves a bargain.

They would become immortal in exchange for abandoning all arcane magic and creating an order of druids that would protect and shepherd the magical world tree Nordrassil, which in its turn would shelter and conceal this new Well from the demons. They agreed, and their society (always somewhat matrilineal) became essentially one of ageless priests and warrior women while their men slept, fulfilling the bargain with Ysera as druids. This was not to everyone’s liking, and the ancestors of the modern-day blood elves in time split with their people over their decision to abandon the arcane. Led by Dath’remar Sunstrider, these exiles would sail across the ocean, making landfall in what today is the Tirisfal Glades.

And as for the Legion, it would remember its defeat. Sargeras would not forget the world that balked him, and when he struck next, it was with a plan utterly unlike the brute force invasion of the War of the Ancients.