The Queue: Conducting the elements 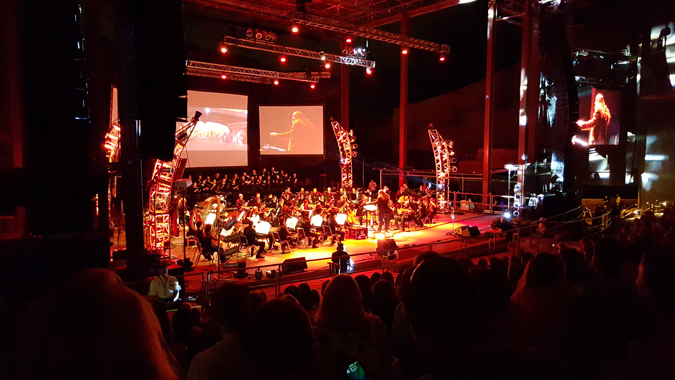 So while the rest of you were busy devouring Legion‘s announcement, I was off at Red Rocks for Video Games Live. I’m pretty sure one of the highlights of the whole experience was when Russell Brower took the stage to conduct a Warlords piece, and the wind kicked in precisely when the orchestra struck up the first few notes. Seeing a concert in an outdoor amphitheater like Red Rocks was amazing enough, but to hear that track, surrounded by giant rock walls on either side while the wind swirled around us all and nearly took the sheet music off the stands was downright eerie. It was like we were on Draenor. I still have goosebumps! And we have so many questions, so let’s get to those!

Any news/idea on getting another character slot per server. I have one of each class currently. I really don’t want to delete a character to make a Demon Hunter.

Blizzard actually answered this in an interview today: yes, WoW players will be getting another character slot for their new Demon Hunters!

Q4tQ: Do you think double jump will eventually become a thing all classes can do?  People have been asking for double jump for a while.  Now we get it, but only for Demon Hunters.  Will it be double jump for all or riot?  Just seems like something a lot of people will complain about.

I am sad that double jump is not something that everyone is getting, but at the same time, it does a lot to add some pretty cool flavor to the brand new class. Now if they could give Demon Hunters a talent that allowed everyone in their party to double jump, a-la Aspect of the Pack, that would be pretty cool, wouldn’t it?

Q4tQ: So apparently the fact that Broken Isles were risen by Gul’dan from the bottom of the sea is retconned since Isles are populated by everyone but sea creatures. What do you think about that?

I think Blizzard can re-shape the lore any way they’d like, since they wrote it originally. As it stands, Suramar is the only one that has a lot of revisionist history with it. The other areas may very well have been scattered across the sea for all we know, and brought together with the Cataclysm. Mostly, I’m not really willing to dismiss or get worked up about lore for this expansion right now because we haven’t seen any of it in context yet.

They mentioned the conflict between the alliance and the horde is escalating and they mentioned Jaina is not in Dalaran and is upset. What are the chances she will do something that causes the escalation? I would love to see the alliance be the cause of the bad blood this time and she would be a great tool to use maybe kill a major horde character.

Personally, I’d rather that Jaina got news from Kul Tiras, finally, and had to take off to deal with that. Bonus if they go ahead and make her brother Tandred canon. Double bonus if they make him a burly, swarthy, foul-mouthed sailor with a chip on his shoulder and a serious attitude problem. I want to see sibling fights. It’d be glorious. Infinite bonus points if he pulls the line “What happened to you? You’re just like dad.”

So each class gets their artifact weapon early in the next xpac and then there are no more weapon drops from progression, just new abilities to unlock in the artifact point screen like +damage and appearance. is that correct?

Yes. Each class specialization will get their own unique weapon. We’ll be getting Relics that can be used to upgrade stats on the artifact weapons. And we’ll be able to customize the appearance of the weapons from a variety of different models. You can also, if I’m understanding everything correctly, transmog your artifact weapon if you’d prefer a different visual model.

Q4tQ: Will Paladins and Priests share a single City Hall, since their sources of power are similar to identical?

I doubt it — they seem to be really gung-ho about amping up the individuality of the various classes, so putting similar-ish classes in the same Class Hall would be a little counterproductive to that, wouldn’t it? Paladins were originally priests that were trained to be warriors, and warriors that were trained to wield the magic of the priesthood. But they’ve since evolved beyond just that into something that is completely their own.

Light’s Hope is really Paladin central, I’m guessing priests will have some sort of Cathedral, because they do have a very different history and outlook. I’m hoping we’ll see some shadow priest lore while we’re at it.