Lightsworn: Who will be our Class Hall Champions? 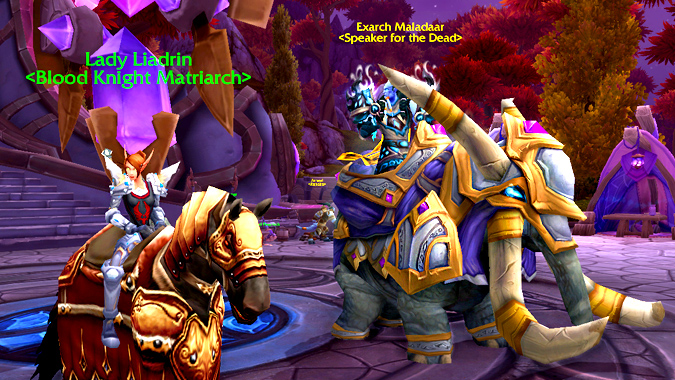 Class Halls are coming to World of Warcraft in Legion, and I can’t wait! We already know that our Class Hall will be a Paladin-only sanctum underneath Light’s Hope Chapel (no stinky warriors allowed), with special Paladin NPCs known as Champions. But which of our Paladin Pals will be receiving invitations? Let’s discuss some potential candidates for our Class Hall Champions, and how likely they are to be joining us in our new secret Holy clubhouse. 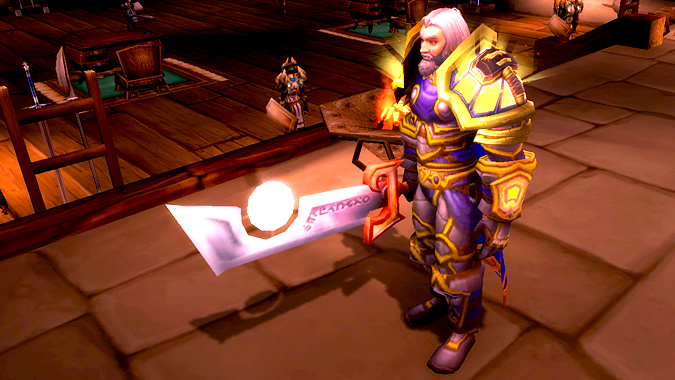 When you imagine a society of Paladins putting aside their differences to work together for the greater good, it’s hard not to envision Tirion being there. After all, he basically already did this when he formed the Ashen Verdict, the alliance between the Argent Crusade and the Knights of the Ebon Blade. These days Tirion seems to be semi-retired, but I’m sure he wouldn’t mind relocating to Light’s Hope Chapel to train new recruits and build more statues of himself. His experience and leadership would also go a long way toward defusing the inevitable disagreements, whether they be old grudges between Vindicators and Blood Knights, or theological disputes between Argent Crusaders and Sunwalkers. If there’s one thing Tirion is good at, it’s sitting frozen in a giant block of ice, but if there’s a second thing, it’s playing peacemaker.

However, we already know that Retribution Paladins will wield Ashbringer as their Artifact weapon, after recovering the sword “where it fell in battle and was lost.” That doesn’t bode well for old T-Ford. It’s very possible that Tirion’s only presence in our Class Hall will be in the form of a memorial statue.

Verdict: Don’t count on it.

Supreme Allied Commander, High General of the Alliance Expedition, and missing in action for years. Wielding Anduin Lothar’s shattered sword and the power of the Light, Turalyon defeated Orgrim Doomhammer and put a decisive end to the Second War. You don’t get much bigger than him.

The return of Turalyon (and Alleria) is sure to be one of Legion’s most highly-anticipated events, as players have been clamoring for these Warcraft 2 heroes for years. Which is why I expect Blizzard will utilize them in the expansion’s main storyline, rather than put them in our Class Halls. Turalyon is too important to lock away in a basement, unavailable to 11/12ths of the game’s players. He’ll probably make an appearance when the Class Hall is first introduced, but I wouldn’t expect to see him there much after that. 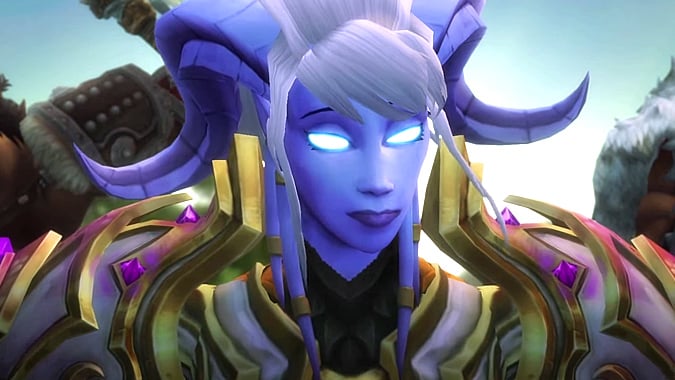 It’s something everyone’s been asking — what’s going to happen with Yrel? Players are understandably concerned that after watching her grow into a confident, inspiring hero, she’ll be simply forgotten when the next expansion rolls around. Her words to Khadgar in the Hellfire Citadel end cinematic didn’t do much to alleviate these fears, either.

Blizzard clearly wants to focus Legion’s story around a new group of NPCs, which is why it would make perfect sense to have Yrel in our Class Hall instead! She’s exactly the type of person you’d want representing your class and helping disparate strangers look beyond their prejudices. She’d also be the obvious choice to represent the Vindicators. Blizzard has said that Champions will have more involved roles than Garrison followers did, which is great news — I’d love to enlist Yrel’s help when battling the Legion, or maybe even when taking the fight to Gul’dan himself. 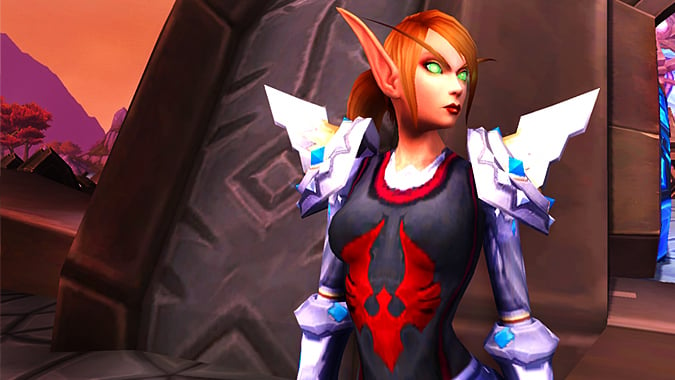 One of the Horde’s primary representatives during Warlords of Draenor, Liadrin had a strong partnership of mutual respect with Exarch Maladaar, and later paired with Yrel to repel Teron’gor/Gorefiend from Auchindoun. The Matriarch of the Blood Knights has a well-established history of working well with others, and after Tirion, is probably one of the game’s most prominent and active Paladins in recent history. 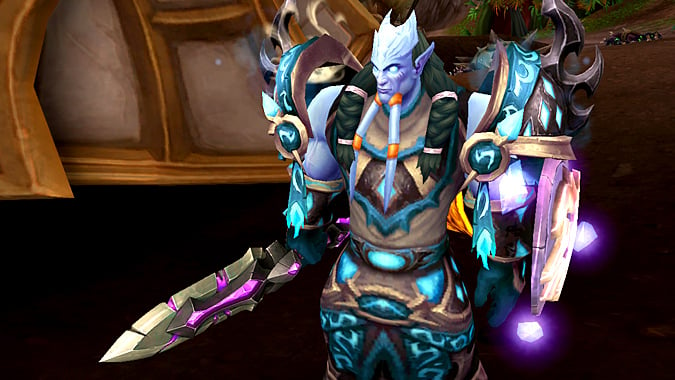 As leader of the Auchenei and one of the five Exarchs of Draenei society, Maladaar rooted out Sargerei influences in Shadowmoon Valley, defended Auchindoun with Lady Liadrin from the Shadow Council, and guided Yrel through the trials necessary for her to become an Exarch herself. Oddly, Maladaar has both Priest and Paladin abilities, but since he wields a sword and shield and is wearing a recolor of the Tier 12 Paladin Immolation set, I think we can count him as one of us.

Maladaar’s “buddy cop” relationship with Liadrin was wonderful, and I’d like to see him be a mentor figure for Yrel. However, I wouldn’t be surprised if Blizzard wanted to distance themselves from the time travel implications of Warlords, and carry forward only a few NPCs. And if it’s a choice between Yrel or Maladaar, sorry Mal — it’s Yrel all the way. 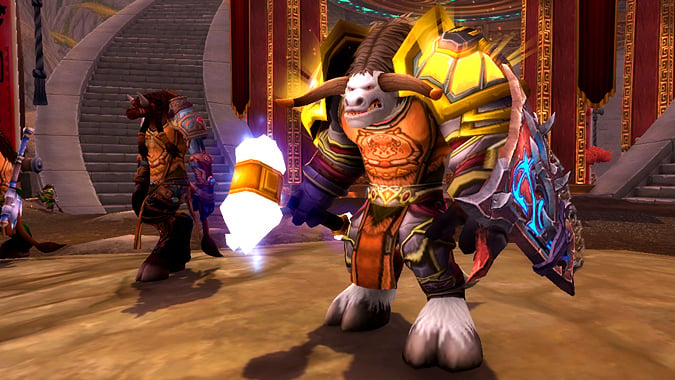 A prominent but tragic Horde character during Mists of Pandaria, this kind-hearted Sunwalker fought alongside the Sunreavers on the Isle of Thunder, and later participated in the Siege of Orgrimmar. Dezco briefly appear in Warlords, seeking a Sun Crystal from Skyreach. The crystal’s light comforts him, though only temporarily — he returns later requesting another, saying that he feels troubled without its warmth.

Although Dezco does not lead the Sunwalkers (that title belongs to Aponi Brightmane), he’s received far more attention and lore than Aponi, making him a better choice to represent them. Additionally, if he has somehow become addicted to the Light, that could be a very interesting problem for our Class Hall’s assembled Paladins to solve. 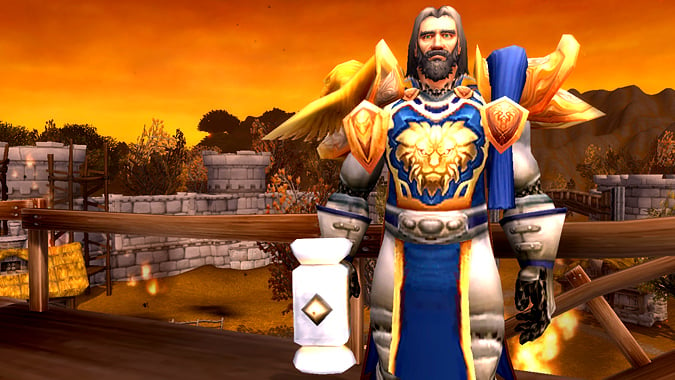 Years ago, Gryan Stoutmantle saw that Stormwind was not adequately protecting Westfall’s citizens from the Defias Brotherhood, so he formed the People’s Militia to fight back. Gryan would later lead this force, now called the Westfall Brigade, to Northrend’s Grizzly Hills in the war against the Scourge. Upon returning home, Gryan saw that Westfall had again fallen on hard times, so he set out to once more to defend its citizens and repel the revitalized Defias presence.

While many Alliance players would remember him fondly from their past adventures together, I don’t think Gryan would make a good Champion. I suspect he’d prefer thumping Defias bandits than proselytizing about the Light with other Paladins. 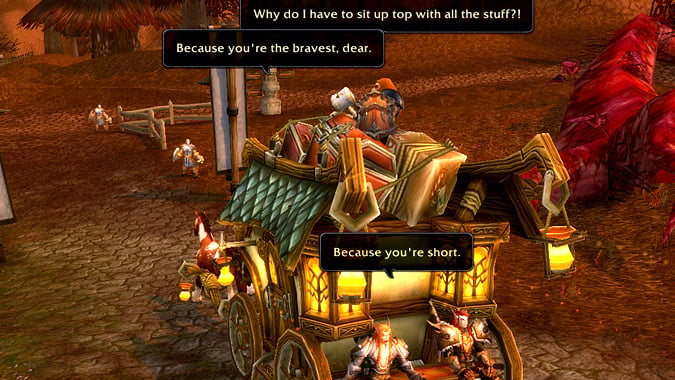 Players who quested through the post-Shattering Eastern Plaguelands will remember the unusual friendship between Gidwin Goldbraids, a Dwarf, and Tarenar Sunstrike, a Blood Elf. These bumbling but lovable aspiring Paladins-to-be competed to see who could kill the most zombies, who got to ride on the front of their wagon, and generally got into all sorts of silly but endearing trouble. Their story — which revolves around their journey to Light’s Hope Chapel, incidentally — took a surprisingly serious turn later on, and what began as a lighthearted rivalry ended up being a genuinely heartwarming tale of friendship and loyalty. Gidwin and Tarenar popped up again in Warlords, so Blizzard is definitely aware of their popularity. They’d make excellent role models for Paladins of different backgrounds learning how to work together. (There’s also a distinct lack of well-known Dwarf Paladins.) 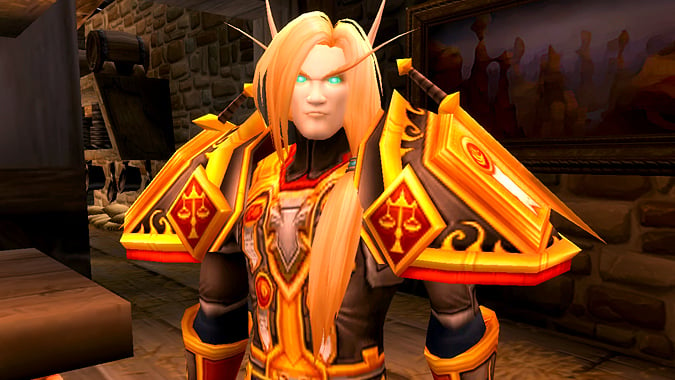 The half-elf son of Turalyon and Alleria, Arator has waited years for word of his parents’ whereabouts. He has never served any in-game purpose other than to remind players about his missing parents, though he does speak of an ominous recurring dream. There’s also a Blood or High Elf Paladin in the Class Hall video that looks exactly like him. 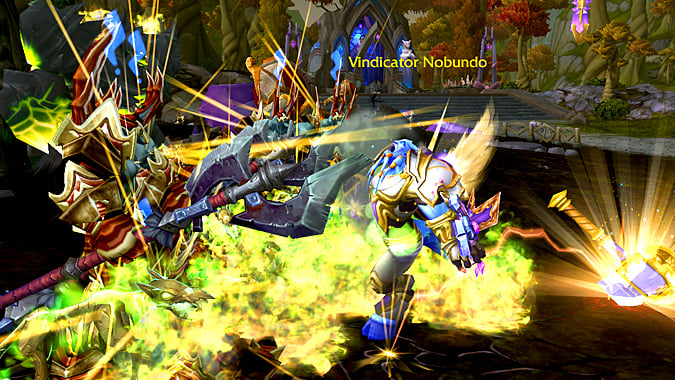 While we know him best as a Broken Shaman, in Warlords we saw Nobundo as he originally was — a badass, fearless Vindicator. That being said, Exarch Maladaar played a larger role in Warlords quests, and as cool as Vindicator Nobundo is, our timeline’s Nobundo is one of the most well-known and important Shamans in the game. I expect Nobundo will appear in a Class Hall come Legion — just not ours. 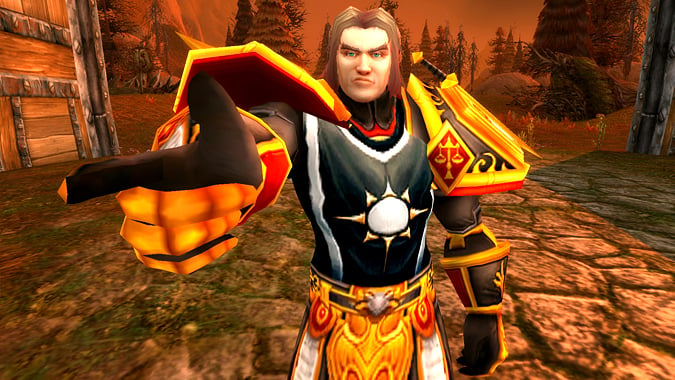 Commander of the Brotherhood of the Light, Eligor represents a faction of Paladins who “aren’t held in check by morals, guilt and useless human emotion.” Eligor and his troops were extremely active in fighting the Scourge in the Plaguelands, and he also appeared in Northrend, educating Alliance troops about the monsters within Naxxramas. The Brotherhood has been around a long time, and their unique philosophies would make for great NPC discussion and debate. Also, I’m 99% certain that Eligor was sitting in the front row during the Class Hall video. 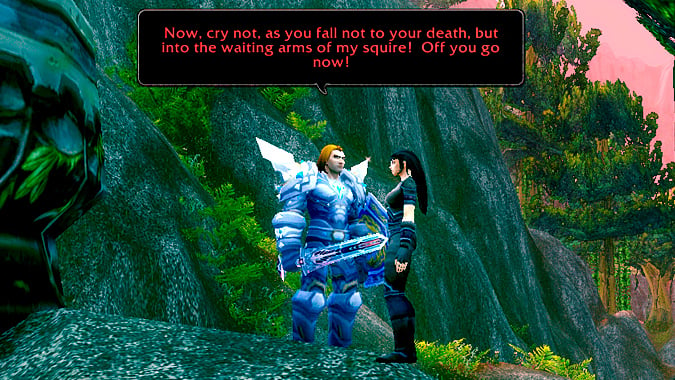 This Knight-Errant can be found in Un’Goro, where he recruits you as his squire to assist him in “rescuing damsels,” and defeating vile “dragons,” with their “spiky backs and lizardy faces.” He later appears at the Molten Front, riding a Big Love Rocket. He’s one of the funniest NPCs in the game, and I really hope he shows up in Legion to provide more hilarious commentary. 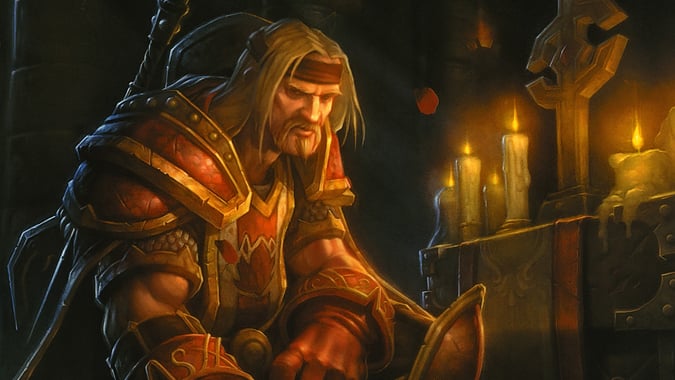 A bit of a stretch, but remember — the purpose of our Class Hall is to be neutral ground, open to all Paladins. And while Paladins of the Scarlet Crusade might be cruel, xenophobic bullies, they’re still indisputably Paladins, able to call on and harness the Light. 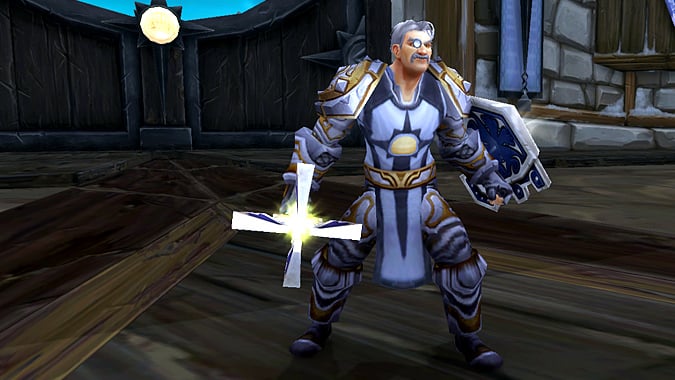 Okay, I just want Eadric there so I can hear him shouting his lines. What other Paladin shrieks “OUCHIE!” when he gets hurt?

Verdict: HAMMER OF THE RIGHTEOUS!

Are there any Paladins I left off the list that you think would make great Champions? Let’s hear your suggestions!