The Queue: This game is full of bugs 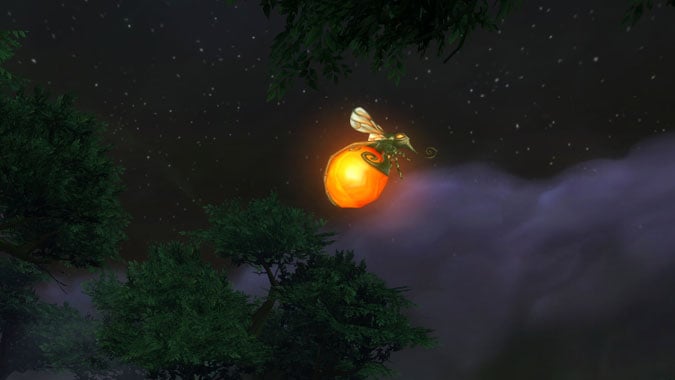 Okay you know, I’m really happy with the amount and variety of Battle Pets we got for this expansion. But every time I pass by one of these trees in Tanaan and see these weird little mosquito-looking glowbug things, I really want one. I know they’re just part of the scenery, but they’re awfully cute, in that bug kind of way, aren’t they? Let’s get to the questions.

Q4TQ – I’ve wondered this for a while.  When I’m on my shaman alt in my garrison in ghost wolf form, I can pick all of the herbs in my garden, grab ore carts and interact with NPC’s without a problem.  However once you start mining ore, you hop right out of ghost wolf form.  Yet my druid alt stays in cat or bear form if I mine or do any of the other things.

Is this due to some lore or just an oversight?  I can’t imagine it’s a graphic limitation as my druid just kind of digs at a herb or an ore deposit and my shaman digs at herbs and that same graphic could be used for an ore.

If you have mining trained as a profession, your character will automatically pop out of whatever form they’re in and proceed to mine the node. If you don’t have mining as a profession, your character will gather the node in whatever form they happen to be in. Why? I have a feeling it’s because if you aren’t a miner, you’re essentially just gathering a quest object — which you can do most of the time while you’re in any kind of animal form. If you’re a miner, though, that node isn’t registering as a quest object you gather, it’s registering as a profession node, and the game deems it necessary for you to indulge in the proper animation. It’s a little weird.

I don’t raid beyond LFR. I’m set for Draenor Pathfinder. My garrison is maxed. Still need legendary ring. What else is there?

This is about the point where I start picking out achievements I haven’t completed and working on completing them, or mount collecting, or pet collecting. I’d work on the legendary ring, too, but I tend to be a bit of a completionist in that aspect. If I’m going to start something, I want to finish it, more often than not.

Q4tQ: Is there a lore explanation behind the white swirly maelstrom in the sky overhead when your toon dies in WoW?

You’re in the spirit world — or at least that’s what a lot of people call it. Land of the spirit healers, land you go to when you need to pick up a quest from a dead guy. It’s sort of like another plane of existence. The swirly bit in the sky is probably just to indicate that hey, you aren’t on the material plane anymore, or it could be some kind of weird representation of the Twisting Nether. There’s no real lore explanation behind it, to my knowledge, it’s just … there, and a pretty cool lightshow.

Q4tQ: What is the most inappropriate place WoW has chosen to put a mailbox in game?  The one that made you say ‘really?!? do we really need to have our coupons and bills delivered way out here?’

The one out at Nessingwary Base Camp in Sholazar Basin. They’re camped in the middle of the jungle, hunting big game, survival of the fittest, and they had time to set up a mailbox and register it with whatever postal service happens to be running up in Northrend? Okay guys.

Does everyone but me just stick to a faction? Because I have toons of both factions and all of the arguments over which one is better/more moral/cooler is…weird to me.

The people who stick to one faction can be very, very vocal about the faction they prefer. I don’t know about anyone else, but I usually level characters on both sides, because I like seeing all of the stories and quests, not just half of them.

Q4tQ: Why do you think Blizz hasn’t implemented level scaling more broadly yet? They’ve done it with Timewalking dungeons. Is the tech just not quite feasible with the game, or is it more of a design choice?

Usually when they’re doing something like this, they want to do it on a smaller scale and make sure it’s fully functional, and that people would actually want to do something like that, before they implement it on a larger scale. They probably could have opened Timewalking to every dungeon in the game, but it would’ve taken longer to develop, and they didn’t really know if we’d be excited about the idea of going back and playing old stuff all over again.

I imagine if the technology worked like they wanted, and if people like Timewalking well enough, we may see more of it in the future, or something on a larger scale. Or maybe they’ll just add more dungeons into the rotation, or maybe they’ll eventually add raids into the rotation as well. I will say that I think rotating through events like this makes it a little less likely that people will get bored with the feature right away, so they might not want to open up everything and just let us do it all. But who knows? It’s up to what they decide to do.