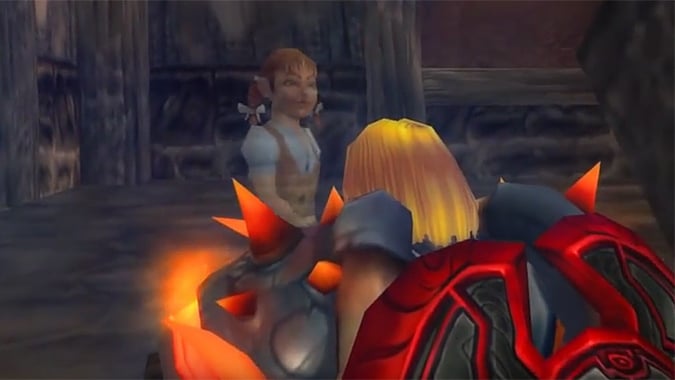 You know, I like the revamps they did to the Eastern and Western Plaguelands in Cataclysm, but sometimes I find myself missing the old quests. It’s not that they were objectively better or worse, it’s mostly that they encapsulated the horrors of the Third War so perfectly. Obviously we’ve moved on from the Third War by now, but in vanilla, it was neat (and incredibly creepy at times) to have that snapshot of just what the Third War did to Lordaeron and the people that lived there. Yes, the Forsaken were a major part of that, but I liked seeing the stories of the regular people who lived and died there, too.

Here is my question for the queue: At what point will Tauren, or Warriors in general, get to use the two-handed totems to bash enemies with that have been a part of lore/comic/NPC usage since Vanilla?

Right about when they give Rogues whips to play with. No really though, I imagine the main reason we haven’t seen them is just a matter of model animation, probably — that and they don’t really like introducing weapon choices that are race-restricted, and for something the size of one of those totems, they’d almost have to do that. I mean come on, can you imagine a Gnome warrior trying to swing one of those things around?

On the back of the customisation options question, Mag’har Orcs in particular, I know you’re adamant that it wont happen, but if, if it did, would you be happy with it just being a new selection in the character creation window, or would you prefer it to come with an alternative starter experience? Like an instanced version of Nagrand, adding more depth to Orc hertitage (yeah, Orcs is a bad example here, sorry), seeding more Characters, and proceeding to see/experience the integration of the Mag’har into the Horde?

If they added new skins/tattoos to existing models, I’d much rather they just keep it something additional you can choose on the character creation screen. The amount of time it would take to create some kind of new starting zone for Mag’har, Wildhammer, etc. is fairly significant. And that’s time that they could be spending developing new content that everyone could play instead. I’d rather see them utilizing their time for new stuff that everyone can experience without re-rolling, personally.

Do you think we will ever see the return of Azeroth amoury and if we do, which weapon would you like to see?

Thunderfury, Blessed Blade of the Windseeker. I mean, come on.

No really though, I would love, love, love to see this series make a return. I loved it so much more than Azeroth Choppers, I loved seeing how they put the weapons together. And let’s face it, there are so many weapon models out there to choose from that they would never really run out of choices for future material, you know?

Elling Trias would be fantastic, as would Mathias Shaw. Garona would also be an obvious choice here — it would be nice to see our Garona again, rather than the eternally-stuck-in-the-Garrison Draenor version. Valeera wouldn’t be a bad idea, either. She’s a Blood Elf, but she’s worked with the Alliance before, so having that neutral bridge wouldn’t be a bad idea.

Personally, I’d love to see some of the old rogue quest givers from vanilla make a reappearance. Shenthul, Therzok — heck, she’s not gone from the game but Amber Kearnen was a member of SI:7 that handed out rogue quests back in the day. Any of them would be cool.

If Blizz gave you the ability to have one and only one class spell or talent back from years past, what would you choose?

Eyes of the Beast. It let hunters take direct control of their pets. Back in vanilla, this was utilized to pull bosses from one room in Molten Core to another — we had a really, really good hunter in my first raiding guild who was absolutely amazing when it came to pulling off pet pulls. Plus it was just a fun spell to have!

What is your favorite WoW machinima of all time?

I am an absolute sucker for anything Cranius does, but hands down my favorite machinima is still Darrowshire. Mostly because that particular quest chain carries so many memories from leveling in vanilla — I don’t think I’ll ever forget taking what seemed to be an innocent enough quest from Winterspring and ending up in a ghost town talking to the ghost of a little girl.

That quest chain was one of the best, creepiest, most touching things in vanilla WoW, and while I appreciate the Cataclysm revamp, I think it removed a lot of what made that quest so amazing in the first place. But I still have the song and the video to remember it.