The Queue: Who are these angry men? 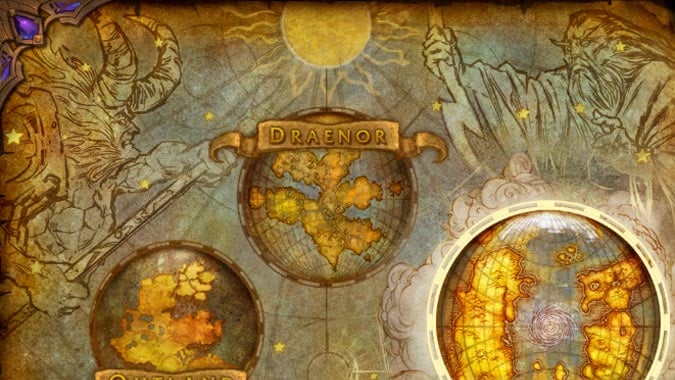 Look, I generally think I have a pretty good handle on Warcraft lore. But I don’t think I know who these two angry dudes are on WoW‘s map pane. One of them is sort of Illidan-y satyr-ish, the other is wielding lightning in a very Thor-in-a-wizard-robe kind of way.  I’m assuming they’re constellations of some sort, given the stars haphazardly placed on both of them, but they don’t look Titan or Sargeras enough to really fit either one. One of these days I’m going to have to find a definitive answer for that one. Until then, I’ll settle for answering the questions you guys have thrown my way.

Q4tQ: About upcoming transmog system: will we have retroactive access to items we’ve already got rid off (greens from quest rewards, sold dungeon loot, etc.)? Before WoD I ran UBRS quite a number of times, and sold quite a number of now-unavailable items, will I never see them? Theoretically Blizzard could run check on completed quests and number of boss kills etc. to do this, but do you think they’ll do this?

I am not holding my breath on that one, and here’s why: World of Warcraft has a wonderful system that will restore an item that was accidentally deleted or destroyed, but it only holds records for so long. I can’t access or restore something I deleted a year ago. I don’t think Blizzard has been perpetually keeping track of everything we’ve gotten and everything we’ve vendored or deleted over the years, so I doubt we’ll see that stuff just magically pop up when the new transmog system goes into effect. They just don’t have record of who got what in  every expansion.

However, since they’ve said they’re thinking about account-wide transmog access, if I’m missing a quest item from a quest I’ve already completed on one character, I can always run through those quests on an alt and pick up the rewards that way. There’s a little extra effort involved, but hey, I’d still be able to get that old stuff, you know?

Do you think 40$ for a blizzcon pet is a little too overpriced?

No, because they aren’t charging $40 for a BlizzCon pet. They’re charging $40 for a live stream of panels, contests and events from the convention, and you get all virtual goodies with it as well — they usually have the pet for WoW, and virtual items for their other games as well. And if you missed anything, you can go back and watch it again for a full two weeks or so after the convention is over. $40 is a pretty good deal for being able to see everything the convention has without actually being there.

Will we see a F&F alpha for Legion or will it go straight to beta? (Hopefully this hasn’t been answered before)

We don’t really know about that one. F&F alphas aren’t exactly public information or widely spoken about. Blizzard hasn’t said anything about it one way or the other — right now, I’m thinking we’ll probably hear a lot more about Legion and any possible beta murmurings when BlizzCon hits in November.

Do you think they will take away our Garrison Hearthstone (and compass) when Legion goes live?

I’m not sure why they’d do that. I’ve still got all kinds of teleportation items that send me all over Azeroth — I’ve even got the medallion that teleports you to the Black Temple in Outland, for that matter. Neither of those items are anything that could be considered overpowered or game-breaking, so I don’t really think there’s a need to take them out.

What story in the WoW novels would you like to see added into WoW proper with cutscenes and other stuff?

Stormrage. Not the whole story, mind you, but some kind of recap of the Nightmare War and what exactly happened at that point. It would be nice to see it mentioned in game, especially given that we’re going to be seeing Xavius and the Emerald Nightmare in Legion. I mean, I can recommend that people read the book (and I do!), but having those events somehow explained in game for players who aren’t really into reading novels would be nice.

Q4tQ: Are Artifacts just an evolution of class accessories, or can we expect to see the latter implemented independently?

Artifact weapons are an entirely different thing. I don’t know if we’ll see class accessories implemented anytime soon, we haven’t heard anything about them since that mention you linked. I think Legion would be a really good place to introduce them, just because they’re apparently trying to focus on the idea of classes as organizations — class accessories would make really neat rewards. But whether or not we’ll see them at all is still up in the air. Here’s hoping so!