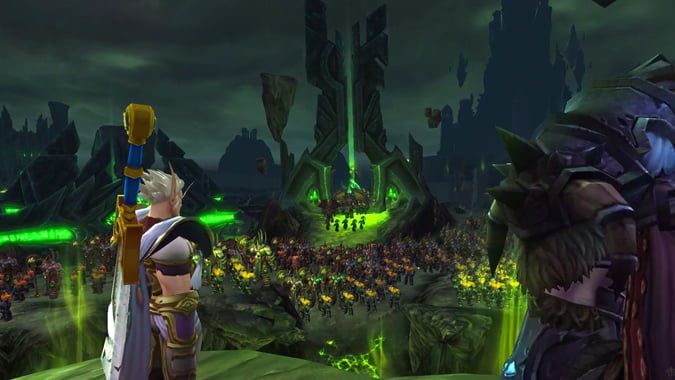 I can’t be the only one looking at the events of Legion and thinking ‘okay, then what?’

Because really, what happens after the biggest demonic invasion in Azeroth’s history?

Assuming we win and hold off the Legion, that puts us up 3 to 0 against the destroyers of the universe. We’ve already stomped on Archimonde twice, we kicked Kil’jaeden off our planet, we beat them back 10,o00 years ago, beat them again at the end of the Third War, and now we’ll have stomped them even harder. What does that leave us with? No matter how big the demon army that invades Azeroth, it’s still a very small fraction of the Legion’s overall forces, but it does beg the question of Azeroth’s future. Are we just going to go back to fighting each other after this?

At this point, we have a few possibilities for future expansions on Azeroth. There’s the underground world where the Old Gods and their servitors lie slumbering, there’s the oceans, and theoretically there could be way more planet to explore — as the Red Shirt Guy pointed out at BlizzCon once, Northrend is your typical polar region but Pandaria and the southern parts of Kalimdor and the Eastern Kingdoms are all tropical, respectively. (Well, Kalimdor is mostly dominated by deserts at the south, with AQ/Silithus, Uldum and Tanaris all being deserts, but Un’Goro is definitely a tropical jungle.) Is Pandaria at Azeroth’s equator? Is there a whole southern hemisphere down there?

That’s not even talking about offworld adventures, because I’ve sung that song before.

So now we leave it up to you — where do you want to go after Legion? What do you think will happen next?