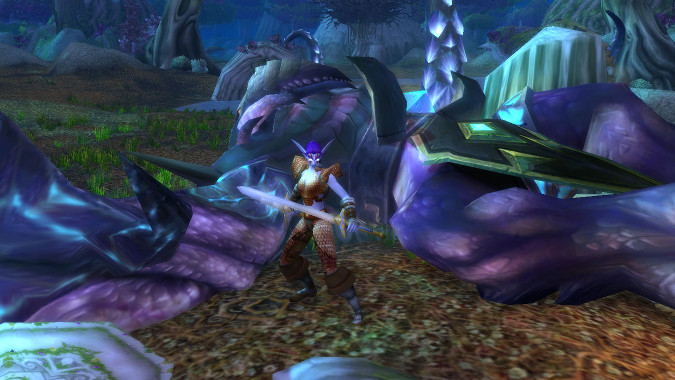 What’s an Aphotic Zone? Well, you could ask this fellow, but he’s quite dead.

Hi. Welcome to The Queue. We answer your questions here.

Speaking of Kel’Thuzad, I’ve always found it odd how his name is so drastically different from most other human names.

I read a theory once that his name is not actually Common, but Thalassian (much like Medivh, whose name is Thalassian for “keeper of secrets”).

Consider Thel’zan the Duskbringer. Once called Father Inigo Montoy, this powerful lich was given the gift of unlife by the Lich King when he tricked a group of mortal adventurers into giving him the Phylactery of Kel’Thuzad rather than destroying it. His returning the phylactery to Arthas meant the Lich King could return his loyal servant to life. We know little about Montoy, save that he was a member of the Brotherhood of Light, that he betrayed them as well as  the Argent Dawn in order to help return Kel’Thuzad to unlife, and he may have been obsessed with returning his father to some form of life.

What I find interesting is that Thel’zan isn’t the only lich to assume a name similar to that of Kel’Thuzad — Amal’thazad the lich, who trains Frost Death Knights in Acherus also has a similar name. I’d speculate that some liches take on use names save that we see that Kel’Thuzad was named that as far back as his tenure on the Council of Six during the period between the First and Second Wars. We know that Thel’zan did adopt a new name — did Amal’thazad? And were they doing so in homage to Kel’Thuzad, or in imitation of him? Did he change his name, perhaps long before the coming of the Lich King, when he began to study necromancy?

Remember, Kel’Thuzad was engaged in necromancy before he’d ever heard of the Lich King, going so far as to experiment in reanimating rats. So it’s possible that there’s some ancient tradition among Azerothian necromancers that leads to one changing one’s name, and Kel’Thuzad may have adopted that tradition in the past — perhaps this is even why Antonidas began to suspect him.

Whatever the truth of it is, I agree that Kel’Thuzad is an unusual name for an Azerothian human. Even his friend Helcular is relatively normal in comparison.

Alex showing his Alliance bias with an outrageous slur against my Lady Sylvanas. Raised undead have a choice. She’s not the Lich King with lipstick on.

Do as we say or we put you back in the ground is not much of a choice.

And the argument falls kind of flat when you do Silverpine and the people on Fenris Isle are immediately loyal to Sylvanas as soon as the Val’kyr reanimate them. Immediately. These are people who, when alive just seconds before (when you were busy murdering them) fought Sylvanas and her agents. Now, as soon as they’re murdered and brought back as Forsaken, they’re parroting the “Dark Lady” party line. That’s not fishy to you? You really think that’s how that would go without any form of coercion or control?

What is your favorite weapon and/or armour set that your main class CANNOT equip?

For an armor piece, the Frostforged Helmet from Onyxia, the level 80 version. I love this helmet purely for how it looks, and also because it was created to match a set that doesn’t exist. See, originally Onyxia dropped the Tier 2 helmets for every class, so when they updated her for level 80 they invented a helmet for her to drop for DK’s alongside lookalike helms for all the other Tier 2 sets. In other words, I like that helmet because it suggests a set that doesn’t actually exist. I like imagining what the entire Frostforged set would look like.

For a complete set, the Shaman tier 5 set, Cataclysm. It looks awesome.

I know they said all demons are the same throughout all realities in Warcraft but what about Mannoroth? He was like, killed in Warcraft 3, even had a corpse unlike other demons (I think, correct me though). As far as I know, all other demons seem to wither or explode in some fiery fashion. So is the Mannoroth in the WoD version the same as Warcraft 3? It just seems weird, considering he was being revived by Gul’Dan there, unlike other demons who need ‘time’ to recover in the Twisting Nether.

That’s the Queue for today. I’ll see you all Friday.

Blizzard Watch is made possible by people like you.
Please consider supporting our Patreon!
Filed Under: Demons, Monsters, Victory
Advertisement