The Queue: I am not nostalgic by nature 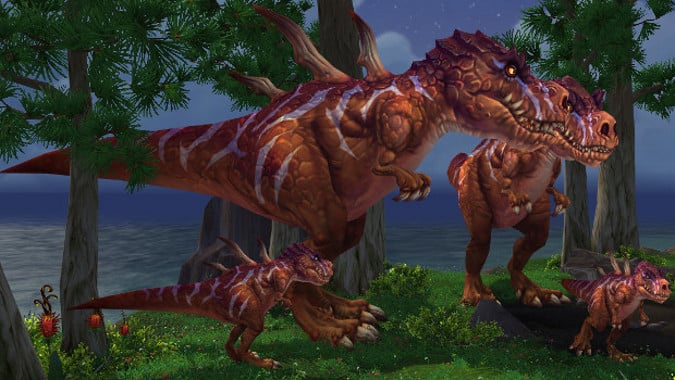 Unless it’s dinosaurs we’re talking about. Then I’m incredibly nostalgic. I love dinosaurs.

This is the Queue. Let us go forth and answer questions. Well, actually, just I’ll be doing that.

I’m not a big questing guy, although I can see that there wasn’t much to do at level 100. We definitely needed more random things to do and fewer garrison chores, but one of the arguments I keep hearing about WoDs failures is that the story didn’t continue past 100. My question is: Has it ever? Sure there have been dailies and stuff, but that can all be consumed during the first days. Have we ever had actually lots of story to experience after level cap?

I’ll go back to Vanilla, where you saw Zul’Gurub, AQ and its opening (lots of people running around Silithus for that one), and the Scourge Invasion/Naxxramas events. There was stuff to do besides raiding, and the raids themselves included smaller raids (20 people, when 40 was the size of all major raids) as well as the non-raid content. Since then, each expansion ramped this up to some degree. TBC had Zul’Aman, the Isle of Quel’danas and Magister’s Terrace in addition to the Sunwell, and several reputations such as the Skyguard and Ogri’la.

Wrath actually did very well in this regard, with the daily quests before the Argent Tournament to assemble it, several new dungeons, the Quel’delar quest chain and the AT daily quests. Cataclysm brought us revamped Troll heroic dungeons, the Hyjal Firelands dailies, as well as three dungeons along with Dragon Soul, and Mists of Pandaria had the Operation Shieldwall/Dominance Offensive, Isle of Thunder, Battlefield Barrens and finally the Horde Civil War event. In comparison, the Garrison Campaign and the Legendary quest didn’t measure up, and since we didn’t have any major content patch before 6.2 that just exacerbates the issue. It’s not that Warlords didn’t have any story in comparison, but the fact that we blew through all the Warlords before 6.2 and then changed to Fel-Lords of Draenor with it seemed strange and rushed. If 6.1 had been a major content push, with a couple of dungeons and an extensive quest chain ala the Operation Shieldwall in Mists, I think it wouldn’t be so noticeable.

What makes you nostalgic in WoW?

I’m actually the anti-nostalgia guy. I think it’s fine to indulge in it but you have to be careful — too much nostalgia blinds people to reality and poisons their objectivity. A lot of the objections I’ve seen since the days of Wrath of the Lich King can be summed up as a nostalgic longing for a long lost game making people remember things in a very biased way.

One example is when people complain about the Dungeon Finder and talk about how before we had that we had a better sense of server community, a claim that strikes me as equal parts nostalgia and good fortune. It’s great that you had a great time pugging via standing in Shattrath spamming every channel you could find, but for me it was unadulterated torture. Nobody wanted Warrior tanks for Shattered Halls or Shadow Labyrinth unless they knew them. Absolutely nobody wanted DPS without a CC.

Therefore, when we’re talking nostalgia in WoW, for me it’s more when I go to the docks in Menethil Harbor and I remember staying up till 4 in the morning talking to my wife, or flying over Stormwind and remembering the day I finally bought my first epic mount just before we headed into Ahn’Qiraj the first time. The feelings are there, but I force myself to make sure they’re distant from actual gameplay.

Q4tQ: Does the Warcraft universe have a space/galaxy in the same sense as “our” world?

Any reference I can find on how the Legion makes their way around is revolving around portals and summoning spells so I was wondering that since they’ve failed several times to invade Azeroth simply because ‘heroes’ cut off any portal they are using (Well of Eternity/Dark Portal/Sunwell), would it be possible to get to Azeroth the old fashioned way by going on a space journey?

*Even the Draenei, often referred to as space-goats, got here with an inter-dimensional vessel. They never really went into space.

There is space — The Great Dark Beyond is the void between worlds, not to be confused with the Twisting (or Twisted) Nether.  The vast majority of the Burning Legion resides in the Twisting Nether because they are demons and as such are linked to the Nether, but to answer your question, yes, it would be possible to do that if you lived in the same universe as Azeroth (the Legion, as I mentioned above, does not) but it would take you a very long time. As far as we know, in the Warcraft setting the only means of traversing the massive distances of interstellar space is via dimensional ships (ships that travel between dimensions) or portals.

Q4tQ: Do you think Blizzard should stop making the end of every expansion the beginning of the next one? Since SoO I feel like I didn’t get satifying endings and it seems like Blizzard is making the same mistake the movies that try to start a franchise do: they don’t have self contained story, making story pretty weak.

Well, the end of Cataclysm definitely wasn’t the beginning of Mists, and while I think I understand what you mean — that having Garrosh escape and go to Draenor makes the end of Siege feel weaker — I don’t know that you can argue that it’s really the case that the end of Mists is the beginning of Warlords. Now, if you’re arguing that the pre-expansion events somehow cheapen the end of the expansion, then I don’t really agree with that.

In general, though, I’d argue that Garrosh’s little excursion was unique. We never saw anything like that in previous expansions. The Lich King went down, and Deathwing’s appearance was part of the Cataclysm story, it wasn’t the end of Wrath. Similarly, the Lich King’s invasion of the cities of Azeroth didn’t end TBC — that expansion’s story ended when Kil’jaeden was beaten in the Sunwell.

I do think Garrosh escaping really felt like a let down after I went through all that effort to stop the guy.

How come whenever people mention AQ style events, no one mentions assembling the argent tournament grounds?

You’ll notice I did.

This is the end of The Queue for today. Here is your surprise.

Blizzard Watch is made possible by people like you.
Please consider supporting our Patreon!
Filed Under: Dinosaurs, Nostalgia, WoW
Advertisement