The Queue: The first line of defense 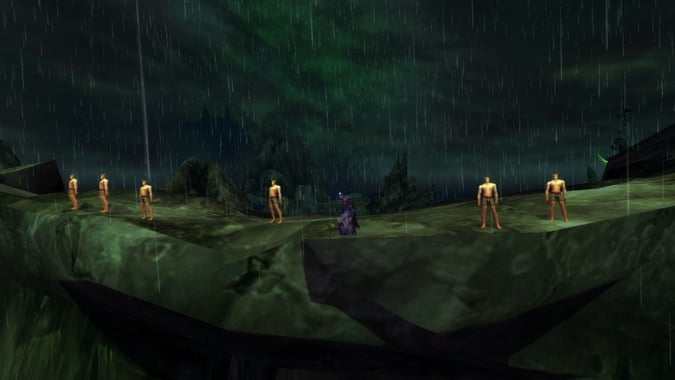 Sometimes you see things in the alpha that you just don’t quite understand, like the frozen, naked, bald, Blood Elf mannequins stationed in strategic locations along the Broken Isles. Why are they there? We don’t know — I’m assuming they’re marking a spot for something. Why the old male Blood Elf model has suddenly turned into a marker, I couldn’t tell you. Nor why they are bald. Or, you know, standing around in Burning Legion central clad only in their skivvies. Let’s just move on to questions I can answer, why don’t we?

Weirdly enough, I miss weapon skill levels. I mean I don’t miss the whole “Whoops my attack didn’t hit because my skill level isn’t high enough” aspect, but there was something oddly soothing about finding a training dummy or a mob immune to everything and just whacking on the thing while I watched the skill number slowly climb up.

What I really miss though, is variety in quest rewards. When they changed it so that offered quest rewards are only tailored for whatever character you happen to be playing at the time, I feel like we lost a lot of the variety that made choosing a quest reward fun. Sure, my Rogue might not be able to use that cloth robe with the intellect on it, but that doesn’t mean I don’t want the option of choosing it, especially if it’s pretty!

Yes, I understand that this was to eliminate the whole “Man, this quest doesn’t offer anything I can use!” feeling, but at the same time, it just seems to have stripped the random grab bag aspect out of rewards. It used to be fun looking them over and deciding if I wanted the useful option, the pretty option, or the option that would sell for the most at the nearest vendor. Now it feels like all I get is the useful option — which while yes, is absolutely useful, isn’t exactly fun.

Do Gul’dan’s Death Knights have different powers than the Lich King’s or are they the same thing just made differently?

Yes! Gul’dan’s Death Knights were basically the souls of his fellow Shadow Council Warlocks, grafted into the bodies of fallen Stormwind knights. As magic users, they didn’t really have the knowledge or the skill for combat — they were necromancers, not warriors. Because of this, their skill sets usually involved spellcasting over brute fighting. If they needed something physically attacked, they’d just raise some corpses and let them have at it, without having to deal with the inconvenience of trying to learn how to wield a sword themselves.

The Death Knights that the Lich King created were champions that were used to combat, and while they incorporate some magic, they’re more melee oriented and battle-hardened than Gul’dan’s Death Knights ever were. They were specifically chosen to become warriors in the Lich King’s army — which, as it turns out, meant that they were essentially going to be front-line cannon fodder that would hopefully carve a good chunk out of Light’s Hope so the Lich King could lure Tirion out of hiding.

Q4tQ: Do you think that Blizzard should/would make merchandise of their Artifact weapons (not full-size ones, but scale models) for their store? Like having USB devices shaped like Ashbringer, or Plushies or something goofy like that?

You know what I’d like to see? Bioware has released a couple of necklaces, one for Mass Effect, one for Dragon Age, both of which are absolutely gorgeous. I’d love to see some of the Artifact weapons offered as jewelry — every time I look at Fate and Fortune on my Rogue, I think man, those would make really pretty pendants. I like the idea of USB sticks too, though — that would also be pretty clever!

Any idea what is gonna happen to the garrisons?

Nope! We haven’t gotten any kind of word on that yet. Right now, I suspect Blizzard is far more interested in finishing development for Legion, and they’ll worry about what to do with the old Warlords stuff later.

You have to actually go to the quest hubs to get started, since you aren’t going to have the breadcrumbs at the outset. For Alliance, you’ll want to head to Embaari Village, for Horde, you’ll want to head to Wor’gol. Once you start the chains out there, it should just lead you across the zone — make sure you’ve checked the option to show low-level quests on your minimap, just to make sure you don’t miss anything!

Legion transmog: Let’s say you unlock a Tier item that has a non-tier counterpart, will the art unlock or do you need both? Assume for that example that aside from tier/not tier the look is identical (not recolor).

I can’t quite answer that one fully, because I don’t have the right things on the alpha client to full test it out. But currently, you cannot transmog a class-restricted tier set to another class. I ran my Rogue through a couple of raids, and while I picked up a pair of leather Nightslayer boots, I cannot transmog that item to my Druid. I also picked up a set of gloves that were the cosmetic equivalent of the Wind Dancer’s Gloves on the rogue, and since the glove model I have isn’t the class-restricted one, I can use it. So I’m going to tentatively say that you’d need to collect the alternate model — the transmog vendor gave me every indication I could transmog those boots to my Druid, but when I clicked the accept button, it didn’t actually go through.

Remember though — this is still early in testing, so these details may not be fully hammered out just yet. Trying to filter the Wardrobe pulls up an error window every time, so I don’t think the feature is quite at the finished state, to say the least.