The Queue: Robot Bunnies Are Adorable 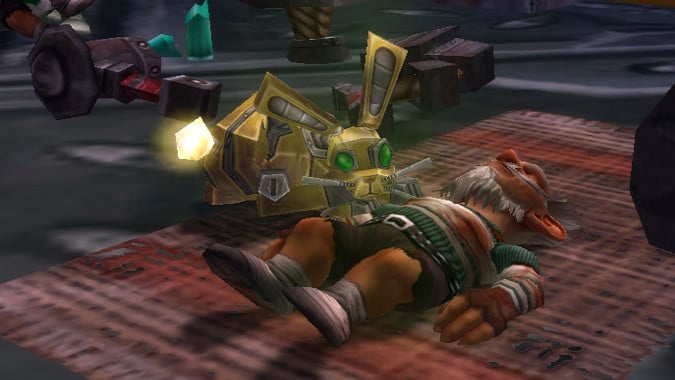 Okay, so it’s clearly a little too interested in that corpse there. But it’s still adorable!

It’s the Queue. We talk about Blizzard games. There may be spoilers for Legion. I’m listening to Synchronicity II from the album Synchronicity by the Police, or as I like to call them, Stewart Copeland‘s Lonely Heart’s Club Band. (The man was an amazing drummer.)

And now, your questions and my answers.

So I was looking the new animations, and they are awesome, the Warrior charge one is my favorite so far. I am really looking forward to see the new Enhancement animations, I am even thinking of race changing it to dwarf if I find their animations better than the Draenei ones.

So QftQ: Are you thinking on race changing, or class changing because of the new animations?

Class change? No. If they’d taken out Titan’s Grip I would have rerolled to Demon Hunter. They didn’t, so I’m staying Warrior. And I don’t see any reason to race change, since I have enough Warriors of various races to make a go of leveling whatever I want.

QftQ: Anyone else get the feeling the Devs are removing all the survivabilty and self heal spells in response to the community saying that Draenor wasn’t “savage” enough? It’s like.  “Oh really?  Fine! Try surviving now!”

That’s certainly not the case for Fury Warriors, I can tell you. On the Alpha, you can talent for abilities like Seething Rage which essentially make you able to hit Enraged Regeneration once a minute, which combines with a greatly enhanced Bloodthirst heal for quite a bit of survival. The Ret Paladin I played felt somewhat squishy, but I could just be terrible at Ret Paladining. My DK felt fine, I even managed to survive the big Frost Artifact quest ending with proper use of Death Strike. So I’m not sure which classes you think are lacking survival tools but it wasn’t Warriors or DK’s.

Sorta RP question.  Personal head canon for me, because I don’t actually RP, but I do play on RP servers and I enjoy watching other people RP sometimes, and I daydream up a lot of background stories when I play my characters.

Do you imagine up surnames for your characters?

For example, I named my dwarf hunter Bor, but in my head I added Sparkhammer.  I was thinking of dwarvish last names and came up with that one a long time ago on my own and just liked it.

I actually haven’t come up with a surname for my main, a blood elf priest, yet.  I wanted to think of a name that’s not so “fabulous” (like Sunstrider) but something a little more mundane for a blood elf, but I couldn’t think of anything that didn’t sound Night Elvish, so I kinda gave up on that for now.

It depends on the character. For instance, my Draenei all tend to have one name. That’s it, just the one name. While when I play a Worgen, I assume I have a surname like Gregory or Danforth or Mullens, something vaguely reminiscent of Victorian England. My Tauren do not have such names even though other Tauren do. Instead, I tend to give them very long names that I then shorten among friends, so my Tauren Warrior is Nornagaranal and my friends call me Norn. (I also assume I’m either a Bloodhoof or a Grimtotem — I like the idea of playing a Grimtotem who is loyal to the Tauren people over the tribe.)

For your Blood Elf, I’d probably go with Dawnchaser or Duskeye. Just came to me.

“But the whole ‘force her to be my consort’ bit, I really hate that”

I hope I’m not opening a can of worms here, but do our fictional villains really need to be less evil to avoid offending us? I can’t quite wrap my head around this attitude. Where do we get off placing the evil acts of villains at Blizzard’s feet, anyway? At that point, how could they possibly please us?

I understand and agree with the assertion that rape is a cheap and lazy way to make a villain look evil. But this is a very small part of Malygos’ misdeeds…I dunno. I could never write for an MMO.

Well, first off, I don’t hate it because it offends me. It does offend me. But it’s also freaking stupid.

Someone kills your wife, you want revenge. Sure, that makes sense. If someone killed my wife I’d be enraged beyond reason. I wouldn’t immediately decided I wanted my wife’s killer to be her replacement. I understand that dragons aren’t humans with human emotions, and that Malygos was at that time (at best) only recently returned to some form of sanity. But it still struck me as a stupid idea, a really pointless idea, and thus it’s not the evil of it that bothers me, or even the offense of it (and I’m not going into why it offends me) but rather the simple fact that it strikes me as a very very stupid move on Malygos’ part. He has an entire Dragonflight of loyal blue dragons, he can’t find one suitable consort? He has to take the red dragon that killed his wife?

Someone kills your wife, you kill that person and you move on. The fact that he had to torture her into insanity just to pull it off in the first place, while simultaneously slighting every single loyal blue dragon that might think she’d make a good consort was just mind numbingly stupid on top of being yet another example of rape as a plot device. Making Malygos a creepy idiot doesn’t ramp up his threat factor in my eyes.

Q4tQ: Is anyone else excited that they’re turning the buffs into more active abilities? Looking at what Blessing of Might and Kings are becoming for Ret is actually really cool, and a lot more interesting than 60 minute “check the box” buffs.

I was a little sad to see Battle Shout gone. Generally I get what they’re going for, but combining BS and Recklessness as they have basically turned it into a cooldown instead of a buff. But I did play Ret and liked BoK quite a bit. So I can see why you’d be excited for that.

Q4tQ: Whatever happened to blades?  In Vanilla WoW, there were a lot of really great swords and axes, with honed edges and everything.  In Wrath, it seems, all went to pot.  Ever since, the swords look more like some sort of bizarre fraternity paddle, or planks for flooring, more than swords.  Put some obsidian on the edges of them and they’d look more like that kind of Mesoamerican club than a sword.  Axes look like you’re getting ready to take a pizza out of the oven.  Where are the honed edges of old?  I get that WoW has a cartoony style, and I’m cool with that with the armor especially, but the design of bladed weapons since Wrath has been wretched in my eyes.  Are we doomed to this school of artwork?  Or is everyone else happy with this sort of look, and I should just focus on transmog with old models?

Well, look at the Lionheart Executioner or Calamity’s Edge from BC, or even Ashkandi (which we all know is the best 2h sword model ever and if you disagree I will simply ignore you because you’re wrong) and you’ll see some frankly impossible swords. It wasn’t all honed edges and realistic blades in Vanilla. Heck, even the Arcanite Champion is a bit ridiculous when compared to a real sword.

Typhoon‘s not, though. That’s a nice ‘realistic’ sword if that’s what you’re looking for.

Keep in mind I like models like Armageddon that are frankly ludicrous. I have no problem with Gurthalak or Starshatter. So I think that you and I have a different idea of what works aesthetically, and so anything I said wouldn’t work for you. I do agree that it can go too far with the big, almost carved from foam look – I dislike the Rage-Possessed Greatsword, for example.

However, with Legion there won’t be a lot of weapons dropping — you’ll get your Artifact and that’ll be it for most of the expansion. So I’d say that yeah, transmog is going to have to be what you go for. If you’re talking 2h weapons there’s always old reliable, the Truesilver Champion. (I’d suggest Warmonger or The Untamed Blade but you would hate both of those.) You also might like the Obsidium Executioner, a Cata crafted weapon, the Gizmotron Megachopper from Gnomeregan or perhaps the Twinblade of the Phoenix.

That’s the Queue for Saturday. I’m likely back for Sunday’s Queue, so see you then as well.

Blizzard Watch is made possible by people like you.
Please consider supporting our Patreon!
Filed Under: Animations, Malygos, Swords
Advertisement