While there are a lot of guides and blog posts out there teaching people how to do good damage, what we explored last week was one major, unintended side effect of the predominant “style” of presenting One And Only One Way of doing things. The problem? It unnecessarily discourages player customization. We saw that simply giving people a little data as context can drastically reduce this side effect without compromising the main goal.

This follow-up explores two other side effects and shows how presenting a little data to players works equally well for mitigating them:

Recall the question and graph below from our cookie cutter builds article. It shows whether people thought it was acceptable for the Fury Warrior to keep using Furious Strikes, based on the statement they saw. People were randomly shown one of three statements: a data statement, a guide statement, and a top player statement (shown in orange text below).

Players’ answers were telling, with different responses based on the way the question was asked:

Immediately after asking that question, I asked “Why?” People were free to type in anything they wanted. I read over 2,000 comments, and five types of responses emerged:

The team category really surprised me. Usually when you think of the word team, it elicits positive feelings, but that’s not the case here. A whopping 75% of the team responses are really harsh, and often quite rude:

“It’s selfish towards the rest of the raid to run a suboptimal talent and he is performing poorly.”

“If he doesn’t feel that he should switch, then he should simply look for another raid team which states at the time of recruitment that they are alright with people playing suboptimal specs.”

This group harbors nearly all of the negative attitudes. The attitudes here are the sort that make people feel stupid for “not understanding simple game mechanics,” or just feel bullied. We’ve all been there; we’ve all seen it. A player isn’t performing where they should be, someone suggests a change, and the bandwagon jumps on — usually not in a positive way.

Am I suggesting people should play anything they want, anyway they want, regardless of how well they perform? No. Raiding is a team sport, after all. But I do believe people are unnecessarily harsh. Unnecessary is the key word here — the whole premise of these articles is that most aspects of character customization (talents, gear, et.) are really well balanced. When abilities are balanced, bullying someone into changing a talent that is roughly 1% different isn’t going to make or break the raid.

Let’s look at the results for the “Why?” question. I dissected this data across different groups: people who played Warriors (or not), raid leaders (and members), and people who progressed through various raid difficulties. The results are very similar across all groups, believe it or not! 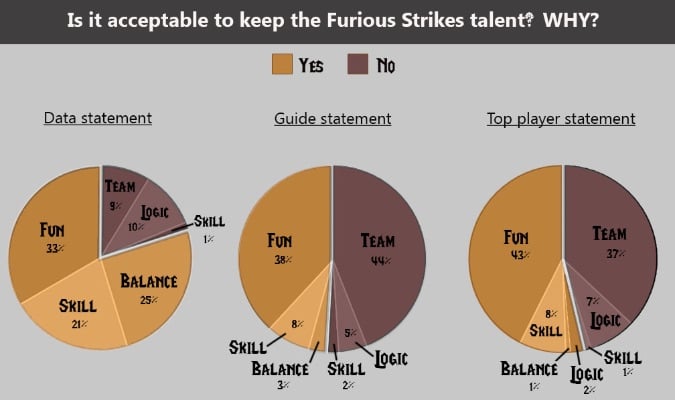 When I saw how large the team categories were for the Guide and Top Player statements, I went back and checked the data three times. I couldn’t believe how many people were this angry at the Fury Warrior.

But look at what happens to the team responses when shown the data statement. It drops from about 40% of responses to 10%. And since 3/4ths of the team statements are rude, that shrinks the toxic group from about 30% to 7.5%. I don’t know about you, but I’d love to be able to decrease the ratio from 1 in 4 people being toxic to 1 in 13!

After reflecting on this a bit more, I realized that most of the team people didn’t intend to be rude. In fact, they perceived the Fury Warrior to be the rude person rather than themselves because he wasn’t taking the team into account. And for a team sport, that is a fair point of view. This group is acting on the information given to them, just like they do in game, which comes from guides, forum posts, tools, and so on.

One of the reasons I believe this group isn’t made up of inconsiderate jerks is the drastic attitude shift when looking at the team responses to the data statement. Showing people that the talents are balanced redirects their assessments to more constructive areas. This is where the skill category shows up. When shown the data statement, people are very likely to suggest that skill might be the issue rather than the talent. Responses suggest looking at logs, finding out how many actions per minute they are using, seeing if they understand specific mechanics, and so on. Basically, these people suggest working with the person to help them improve, rather than just telling them to change a talent and walking away.

“According to the sims it does not really matter. The lack of DPS is either due to lack of skill for said player, or an error in the perception of the team (maybe he takes on more tasks).”

“There is more to the encounter than raw DPS – like survivability. Plus, you end up with better DPS with a familiar rotation. Plus 0.5%? Not a hill to die on, and not the root cause if the player is doing noticeably low DPS.”

Next, let’s look at the logic category. When shown the guide and top player statements, the logic group responded with some level of detail about why Sudden Death (the popular must-have choice) should be chosen over Furious Strikes.

Here we see an interesting reversal: people who were not shown the data made more reasonable arguments. The people who saw the data tended towards really terrible arguments like this:

“Because Furious Strikes isn’t actually good regardless of what your theorycrafter says. If your sims say it is better or worse the person running the sims is doing it wrong.”

So does this hurt our entire conclusion? Is showing more data sometimes a bad thing if it elicits terrible responses like this one?

The problem is not that we showed data to this group of people. The problem is that these people were so sure that they were right, that they immediately and angrily discounted any data to the contrary. This is a side effect of every guide out there not showing data to these people, so it amplifies their beliefs to such a level that responses like the one above become the norm. You can imagine a raider using a simulation or logs to support their choice, only to be similarly shut down.

And lastly, the fun category! If you look at the graph, you’ll see that a stable 30% of players prioritize fun above all else, regardless of the statement they saw.  Neither I nor most of the respondents were saying that having fun means disregarding your fellow teammates’ goals of boss killing. People don’t play this game hoping to be bad and it’s fair to say we all want  to excel at our roles. We just need to direct efforts toward helping players instead of demanding changes that probably won’t do anything other than make everyone short-fused and angry.

It’s also important to consider that a player having fun will be more engaged. In the words of one respondent:

“Generally speaking, a player having fun will play better than a player not having fun.  Engagement trumps small theoretical differences.”

Speaking of fun, I thought I’d share a word cloud of the responses. I don’t know how useful it is, but why not… 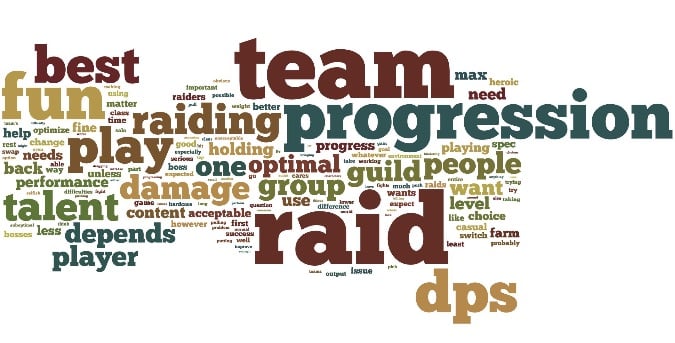 How we, as a theorycrafting community, present advice that influences people’s behavior towards other players. Absolutist advice not only promotes a negative attitude, it’s counterproductive to the goal of improving play. Of course, none of us mean to cause these negative side effects, quite the contrary… we’re here to help our fellow players. I’m not blaming or criticizing any of us. The work each of us does is incredible. I am saying we have an interesting opportunity for improvement.

By showing data behind our findings and providing context we can (hopefully) dramatically change behaviors. Players all know, deep down, that spell usages and skill is likely what causes low DPS. But in day-to-day interactions with raid members, it’s easy to forget that and blame low performance on things that don’t really matter.

Providing context with our advice directs people towards actually helping the player improve. I know this is easier said than done, but I think it’s important we all try. And Legion is a good place to start.

Next I’ll be writing part three of this series, covering other people’s responses to this topic. Some may agree, some may not, others might elaborate on a sub-point I made, or see something new in the data I presented. I’ve already read a lot of good posts from Delirium, SunnierBrew, Magdalena, Talarian, Rohan, Thuggs, and Ben Marble. Blizzard also used it as a topic of the day.

So keep the discussion going, tweet your articles to @AskMrRobot or @Zoopercat, and I’ll see you soon!