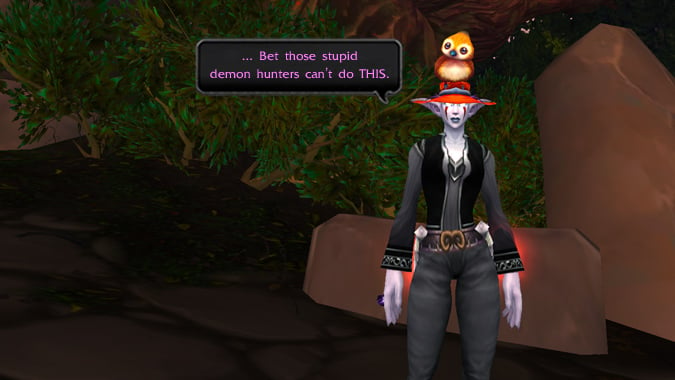 Only one Rogue spec is currently playable in the Legion alpha. Even for the spec that’s available, many new abilities don’t yet have their animations in place or talents fully implemented. The class hall is still under construction. And with the alpha about to go offline for the remainder of the holiday season, it’s looking unlikely that we’ll see much in the way of new developments for the alpha Rogue before our calendars flip over to next year.

When it comes to how Rogues look in the Legion alpha, what is there left to talk about?

Oh, I’m sure we can find a thing or four.

Outlaw: Much too soon for a verdict, but…

Earlier this month, I wrote about how the Outlaw spellbook appears to be coming together, and the ways in which the spec differs from the Combat we know and utilize. In that column, I avoided offering much in the way of my own opinions on how the spec actually plays, focusing instead on providing basic information. That was partly because there was a ton of info to convey and partly because I hadn’t made up my mind yet about it.

A couple of weeks later, I still haven’t made up my mind. I’m starting to think I’m unlikely to do so until we’re much closer to Legion’s launch. But I do have a couple of early impressions I can share.

My experience thus far with the newfangled Outlaw, mostly through the completion of the Artifact quest chain (which I’ll avoid talking about for now — I’ve got your backs, spoiler-averse folks!), is that it actually feels most similar to the way Assassination currently plays in Warlords of Draenor. That’s primarily because of a Blindside-like proc effect, Opportunity, that periodically gives Outlaw Rogues free use of an extra ability. It’s also because the spec plays a little slowly (i.e. it doesn’t require very rapid button pressing), though I don’t believe the designers intend for it to feel that way when the expansion goes live. I’m playing a premade level 100 with uncommon-quality gear and abilities haven’t been tuned yet, so the Outlaw I’m playing right now may well be the slowest it’ll ever be.

Meanwhile, I have mixed opinions at the moment about our enhanced ranged capabilities. Knowing that I’ve got a ranged option at my disposal at all times is both liberating and disorienting; it feels pretty powerful, but it also strikes this hardened, six-year WoW veteran as going against the game’s natural order. Then I realize: melee Hunters. And I cry a little bit. And then decide I’ll probably get over the awkwardness.

Functionally though, I do wonder whether this will truly work out. The combination of Pistol Shot and Between the Eyes makes it easy — perhaps more so than is okay — to kite enemies (particularly NPCs; which largely trivializes some of the challenges we face on the initial artifact quest line, for instance), so I wonder whether our ability to slow and stun at range will be reduced as Legion moves through the testing process. 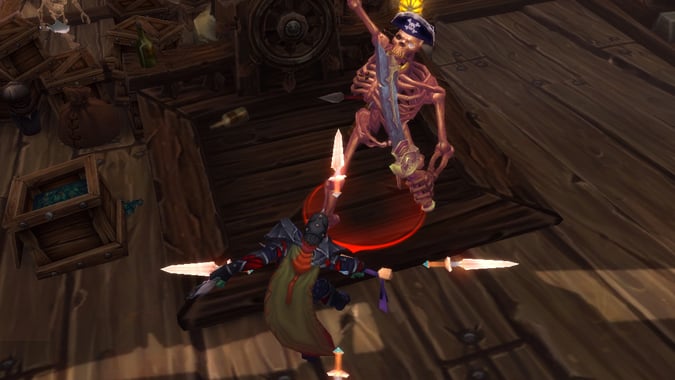 During the Warlords beta, I may or may not have become perhaps somewhat slightly perturbed that even though combo points had been redesigned so that they stacked on the Rogue rather than on the Rogue’s target, WoW’s default interface still used the old combo point display — meaning the number of combo points I had would vanish whenever I had a target selected, only to reappear when I acquired a new one.

In the Legion alpha, that’s no longer an issue. In fact, by default, we can see our combo points in two places:

These design changes aren’t just welcome; they’re downright necessary, because our relationship with combo points is becoming more complex in Legion thanks to the level 45 talent tier, which I mentioned briefly in last week’s column. The tier includes a miniaturized Anticipation (which grants three extra combo points instead of five) that will hopefully prove more reliable to use than the current version (which interacts oddly with some abilities and gear bonuses), and also includes a new talent called Deeper Strategem that literally adds a sixth dot to our combo point bar, allowing us to use six-point finishers.

Oh, and another UI bonus: In the Legion alpha, Anticipation stacks are visible in the same areas where we can see our combo points (they show up as smaller dots either above or below our combo points). 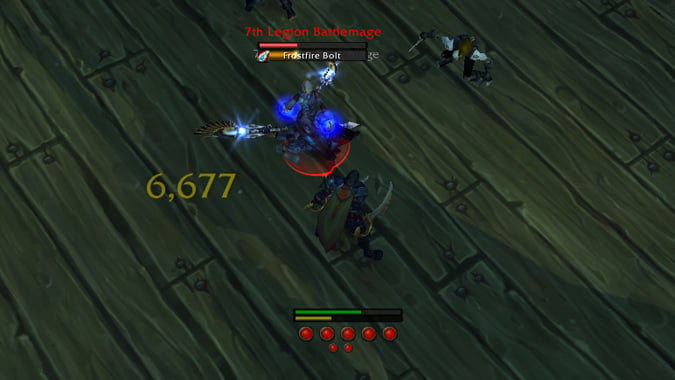 Speaking of talent tiers: There are clear signs that WoW‘s class designers have put in a poop-ton of effort to re-envision Rogue talents in a way that more effectively groups related options while also ensuring that choices within each tier have distinct, interesting effects on our gameplay. I think we’re a ways yet from seeing the extent to which each tier will work out as they hope, but I see strong glimmers of potential in what they’ve cooked up thus far.

Here’s one recurring theme in many of our Legion talent tiers that differs from the Warlords approach: We’re getting more ways to alter our DPS rotation. At the most basic level — before taking talents into account (or other potentially gameplay-altering effects, such as artifact enhancements, trinkets, gear bonuses or whatever else Legion ultimately has in store) — each Rogue spec looks like it’ll be more simple to play. That is, the rotation requires juggling fewer spells in Legion than in Warlords.

However, several talent tiers give you the option to either maintain that simplicity or add a wrinkle. Take, for instance, Outlaw’s level 90 talent tier. If you’re happy with the basic Outlaw rotation, you’ll probably want to grab Alacrity, which will speed up your gameplay but otherwise not alter your button presses. If you’d like to add a ranged AOE button to your rotation, you’ll take Cannonball Barrage. If you want to add a traditional DPS cooldown, you’ll go with Killing Spree. Our talent trees for all three specs are littered with these sorts of choices.

Rogues who play as part of highly competitive groups will likely end up selecting whichever talents theorycrafters determine increase our DPS the most or whatever prominent guidewriters recommend, which I think is both appropriate and unavoidable. Meanwhile, the rest of us appear to be gaining an unprecedented level of freedom to choose how our specs feel to play, which I find deeply appealing. (Even highly competitive players should take at least some pleasure in knowing they’ll be more versatile than they’d been before Legion, given the ways in which some of these talent options expand the possibilities for how we deal our damage.)

I mean, heck, how excited am I that Killing Spree has rightfully been turned from a required cooldown into a talent option? I’ve long lamented Killing Spree’s fickleness — a.k.a. its tendency to behave oddly or outright murder us — in some situations, particularly certain raid fights. I’ve felt frustrated whenever one of my core damage cooldowns was unusable simply because of flaws in its design. The level 90 Outlaw talent tier finally gives me control over my fate: If I don’t think Killing Spree is gonna work for me on a given fight, I can opt into another talent and not feel I’m unfairly giving up all of that potential damage.

So I’m pretty keen on the efforts that designers have made to take another stab at Rogue talents for Legion. Let’s hope that, when the numbers are crunched and we get to really test these options out in actual game situations, that the efforts they’ve made prove successful, and we truly do end up with a robust set of interesting, viable talent choices in each tier. 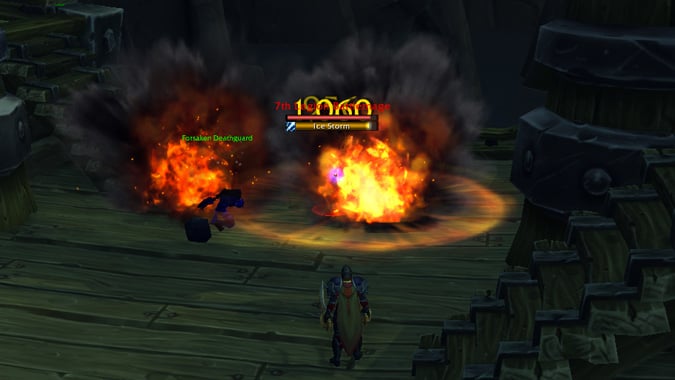 Demon Hunters, I shake my fist weapon at you

When the Demon Hunter class was first unveiled, I urged calm. Let’s not go assuming that Demon Hunters are all that and a bag of fel chips, I said. They’re not gonna take away any mojo that was rightfully meant for us, I said.

Then I started playing a Demon Hunter in the alpha. I double jumped. I glided on my cape-like wings, soaring gently and gracefully through the Twisted Nether, stalking my prey silently from above.

I tasted that sweet nectar. And now I want a whole case of it for my Rogue.

I realize that Rogues are still Rogues, and I’ll continue to take comfort in the unique benefits we gain via stealth and other parts of our toolkit (though I’ll miss Burst of Speed’s value for exploration and questing, and I’ll lament that our ability to survive falls from great heights has increasingly been parceled out to classes other than our own). But man. Those two instantly iconic Demon Hunter abilities — double jumping and gliding — are just so much freaking fun to use. And they far too closely match the sorts of quirks Greatfather Winter has no doubt seen described in letters sent by Rogues over the years as they ticked off their Winter Veil wishes. I guess we were just too naughty.

What are your observations about Rogue class design so far in the Legion alpha? What are you carefully withholding judgement on, and what has already triggered a harsh verdict? What as-yet-unreleased Rogue changes are you most eager to see next? Let’s comment it up!