Encrypted Text: How will Demon Hunters — and Legion — change the Rogue class? 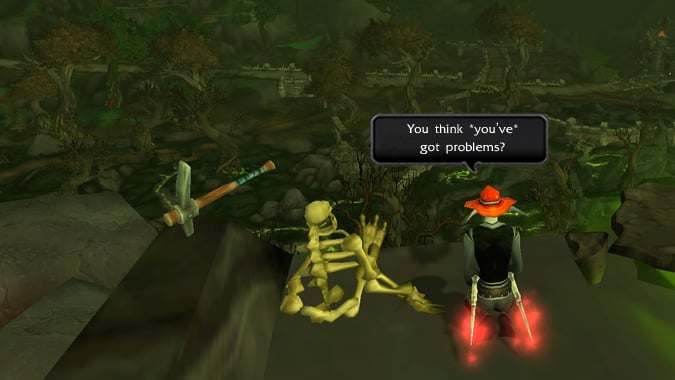 Suddenly, one day, a new melee DPS class sauntered into WoWville. And lo, the Rogue class was most displeased.

The new class’s loot table overlapped with Rogues’. Elements of the new class’s gameplay felt too strong. There was widespread concern that players would flock from Rogues to the new class, leaving the Rogue population a shadow of its former self.

Now, to be fair: Since our first (and only, for at least the next several months) hero class was introduced with the Wrath of the Lich King expansion, it’s true that Rogue population hasn’t been the same. But it’s unlikely that the introduction of a new class was the sole reason, or even a major one. A number of significant game changes were implemented in the vicinity of that expansion, most notably the end of the era of Rogues as the “stunlock” class — a foe that could regularly keep even well-prepared enemy players paralyzed as their health dwindled from 100% to 0%.

When the Monk class was introduced with Mists of Pandaria a few years later, the design parallels with Rogues felt even more pronounced than they’d been with Death Knights — and the rending of garments over the imminent demise of the Rogue class followed suit.

Yet while Rogues are not precisely a wildly popular class to play these days, the existence of Monks and their combo point-like chi resource hardly marked a death knell for the Rogue. (In fact, Monk class population at max level is consistently lower than Rogues’, and the Windwalker, Monks’ leather-wearing melee DPS spec, is the least popular of its three specs, according to data from RealmPop and World of Wargraphs.)

And now, nearly seven years after our first hero class initially caused beads of anxious sweat to appear on many a Rogue forehead, a new hero class is about to stroll into town.

And deal damage in melee range.

And, apparently, see through stealth.

And bask in the nefarious glory of shadowy magics.

And can use actual glaives as weapons, instead of one-handed weapons that look like glaives.

If you play a rogue and you’ve found yourself thinking, at some point over the past few weeks, “Hey; what about me?” You’re not alone. Whenever we see design attention and resources devoted to creating shiny, new melee DPS classes, it can be hard not to feel a little aggrieved. Which, in turn, makes a slightly off-key, off-the-cuff statement about the potential location of the upcoming Rogue Class Order — or, say, about our use of combo points — feel like insult on top of injury, and triggers a disproportionate cascade of public frustration.

All of that reaction is understandable. But dearest Roguelings, I implore you: Let’s not leap off a cliff, grab a hold of our legendary daggers, unfurl our dragon wings, and glide off into the sunset just yet. 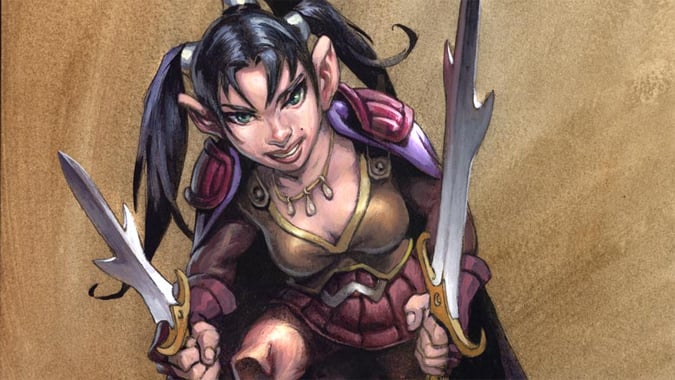 Sure, we can choose to see the impending introduction of Demon Hunters through fel-tinted glasses. But we’ve been down this road before with new classes that ostensibly encroach on our turf, and we’ve weathered it fine. I’m more interested in looking at some of the morsels of Legion information Blizzard has tossed onto a plate for us so far, and in thinking about how they might taste on a Rogue palate.

Demon Hunters will become the first class to have just two specs. Meanwhile, Hunters will finally get their “ranger” spec — a class that’s always had three ranged DPS specs will watch one of those specs become melee.

The rules by which our class specs have abided for many years are clearly being rewritten — or at least getting a pretty hefty revision. Is there a possibility that, in an inverse of the Hunter changes, one of our three specs becomes ranged? Or, now that classes will no longer have a three-spec minimum, that one of our specs is eliminated entirely?

Probably not. The Hunter spec changes are unified around a specific, clear theme: pets. (Instead of having three ranged specs with pets, Hunters will have one ranged spec with a pet, one ranged spec without a pet, and one melee spec with a pet.) It’s less clear what that core theme would be across Rogue specs. And as for those two-spec Demon Hunters — well, it’s easier to rewrite the rules about how many specs a class should have when nobody has played that class yet (and thus nobody harbors deep loyalties to an already-existing spec).

When we think about the possible future changes that Assassination, Combat, and Subtlety have in store, the questions we have to ask ourselves are: What do each of our specs mean to us? What are the core characteristics of the Rogue fantasy that lie at the center of what makes each Rogue spec special?

Some of the most obvious candidates here are our stealth and our poisons. Could you imagine a Combat spec that — in line with the “swashbuckler” pirate idea — didn’t even have Stealth in its spellbook? Or a Subtlety spec that had no use for poisons, opting instead to dispatch its enemies with untainted blades? Or an Assassination spec that, while it was the sole spec that continued to utilize both stealth and poisons, also allowed us to snipe our enemies from afar with a ranged weapon?

Or, heck, what if there were no Rogue specs at all? What if WoW‘s designers let our talents and glyphs decide the theme of the Rogue we choose to play?

Such things may not be technically possible — and even if they are, they may not be a wise move for an aging game still populated by hundreds of thousands of Rogue characters, many of whom are probably people who are perfectly OK playing the same class and specs they’ve known for years.

But we’ve gotten clear signs that for Legion, Blizzard is very much looking to bring back a greater sense of fantasy and uniqueness that initially drew players to their class of choice. And it may well be that the addition of Demon Hunters and their stealth-seeing, glaive-wielding, jealousy-inducing ways actually frees up class designers to think more aggressively about what sorts of changes are possible for Rogues.

That makes now the most important time in years for us Rogue players to look deep within ourselves and ask: Why do we love playing our Rogues? What makes us feel most Rogue-like? What could Blizzard do that would make us feel that way more often, or more strongly? 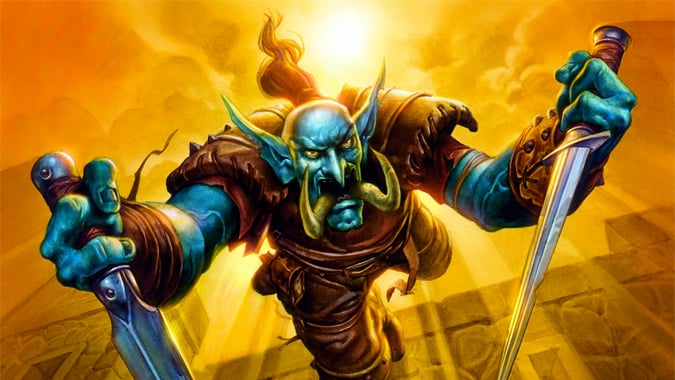 Artifact weapons may solve the worst of our gearing woes

Speaking of dreams: When I completed the final draft of my last column, it was the night before Blizzard announced the Legion expansion (though the piece didn’t go live until a few days later). I knew the announcement was coming, of course (heck, we all did!), but I thought to myself: At best, I’m sure they’ll just talk about new lore, new continents and major new types of gameplay. Surely they won’t take time to tackle a super-specific issue like, say, how we obtain our weapons.

So, OK, sure: On the one hand, a lot of what I wrote two weeks ago became outdated almost the moment the word “artifact” was uttered during the Gamescom session unveiling Legion. But on the other hand, in finally getting my thoughts about Rogue weaponry down on virtual paper, I gave myself a handy set of benchmarks from which to measure how well artifacts appear to address the concerns I had.

Turns out they mostly do — but with a few large issues left as-yet unresolved.

The big win for Rogues (and all classes, really) is that artifacts finally give us the guarantee we’ve longed for that luck will not be the sole (or even a significant) factor in our ability to get a complete set of decent raid weaponry. As a person who, two expansions running now, never got a single dagger to drop from the first raid tier, that news comes as a massive relief. (I’ve spent more than half of Mists of Pandaria and Warlords of Draenor running exclusively as Combat in raids due to a lack of dagger drops.)

But the revelation that artifacts will be unique to each spec within a class (as opposed to normalized across specs, like our legendary daggers and their precursors were) raises a host of questions and potential concerns. As Rogues are currently designed, we need two daggers and two “slow” weapons (axes, fist weapons, maces or swords) to properly play all three of our specs. Assassination in particular actually restricts our weapon options, in that it’s dagger-only; by contrast, though our damage will suffer somewhat if we use the “wrong” type of weapon as Combat or Subtlety, the game at least makes it technically possible for us to do so.

So there’s a hefty set of questions looming about what the game will require for us to 1) obtain and 2) upgrade each of our spec-specific artifacts. If we begin leveling in Legion as Combat and are given a pair of axes as our artifact, what happens when we want to switch to Assassination? If each set of weapons (I’m assuming they’ll be a set, rather than individual items we receive and enhance one at a time) has to be leveled somehow in order to get its damage potential up to par in raids, does that mean we’ll have to take extra time to level multiple sets of weapons? I’m OK with a certain amount of “gating” here, but if it’s anything that requires hours of grinding or that has to play out gradually over the course of several days for each spec’s artifact, it’s going to get frustrating quick. I imagine that people who level alts might feel that frustration doubly.

And heck, what about transmog? What if my Combat artifact is a set of fist weapons? Will I have a way to swap their appearance for other weapon types, or will this be an axe/mace/sword-free expansion for me, since fist weapons can currently be transmogrified only to other fist weapons?

Obviously, we don’t have answers to these questions yet. But raising some of these concerns now may help ensure that Blizzard addresses them during the design process.

So: What are your thoughts on the impact that Demon Hunters are likely to have on Rogue class design? What’s your take on what — if anything — should be done to make our specs (or our class in general) feel more distinct? Are artifacts gonna be the bee’s knees? What other interesting possibilities do you see for the Rogue class in light of the tidbits we’ve learned about Legion so far?