The Monk class was born out of rebellion, pragmatism, and balance. The first Monks were Pandaren who sought to rebel against their cruel and tyrannical Mogu overlords, but while the Mogu were vicious and brutal they weren’t stupid. They’d forbidden their slaves to carry weapons at all. Therefore, the first Monks learned ways to fight without weapons as the Mogu understood them.

Thus did the Pandaren confirm what Lei Shen the Thunder King had always believed: they were a people of great promise and potential. Indeed, it was this very potential that caused the Thunder King to distrust and disarm the Pandaren in the first place. Thus Lei Shen’s belief in the ability of the Pandaren to prove a threat to the Mogu Empire that led to the creation of Monks.

However, while they are a storied class with a long history, relatively few of their kind walked the surface of Azeroth outside Pandaria and the Wandering Isle before the parting of the mists and the revelation of Pandaria’s existence. So with Monks we have a specific conundrum: a class dating back to the time before the War of the Ancients about which little is actually known. The Monk Artifact lore presented with these three artifacts is, in its way, a window into a tradition unknown by most people. 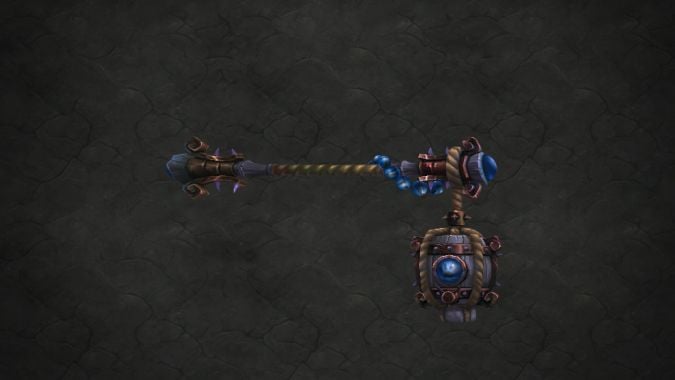 Long ago, as the titanic watcher Keeper Freya set out to populate the world with life, she placed one of the first seeds in Pandaria. From it grew Fu Zan, the first, and all of Pandaria’s forests descended from it. Before populating the rest of Azeroth, Freya fashioned a walking stick for her travels from one of Fu Zan’s branches. Eventually Freya passed her staff to the Jade Serpent, Yu’lon, who later gave it to a uniquely clever hozen. The Monkey King, as he was called, hung his most prized possessions from the staff, which he carries with him to this day.

Fu Zan would almost certainly have to either be G’Hanir or a descendant of it, perhaps its first seedling. Considering that Ra-den, another Titanic Watcher, would leave his Fist in Pandaria as well it seems that this land was of special interest to these beings, perhaps due to the presence of the Sha and the Heart of Y’Shaarj. We also know that the Vale of Eternal Blossoms was another Titan petri dish, much as Un’Goro Crater and Sholozar Basin were — perhaps somewhere in the Vale or elsewhere in Pandaria lurks another Titan Waygate, linking Pandaria to those distant lands. Considering the presence of the Engine of Nalak’sha in Pandaria, it’s possible that following the defeat of Y’Shaarj and the ordering of Azeroth, Freya began her quest to populate Azeroth.

One thing is for sure — Fu Zan had passed from the hands of a Titan Watcher into the safekeeping of Yu’lon, who in turn allowed the Monkey King to hold it. This is a heck of a pedigree for a Monk staff, and likely the Monkey King’s fondness for irreverence and brew will align nicely with Brewmaster Monks who acquire it. 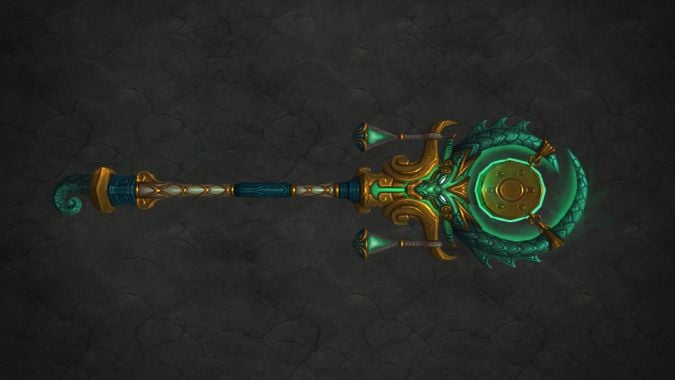 During last pandaren emperor’s reign, a prophecy arose that a ruthless Legion would invade the world of Azeroth and leave it shattered. To save his people, Emperor Shaohao embarked on a series of trials, taking with him the ancient staff Sheilun. Afterwards, he used his newfound wisdom to become part of the land. He made Pandaria into a separate continent and enshrouded it in mist to protect it. His staff clattered to the ground, where it lay until the monks of Tian Monastery found it and took it to the Terrace of Endless Spring for safekeeping.

Okay, so what we have here is no simple staff. If you’ve seen the Burdens of Shaohao, you know what this staff is — the implement by which the last Pandaren Emperor, Shaohao, erected the Mists around his empire and the other related lands such as the Townlong Steppes and the Dread Wastes, transforming what was part of primordial Kalimdor into a new continent of its own. This is, strictly speaking, the ultimate Mistweaver weapon. A staff held by the Emperor, used to work magic on an order of magnitude rarely seen on Azeroth, which helped preserve part of the world from the Legion during the last great invasion and the Sundering itself.

This is the weapon which made Pandaria what it is today. It’s hard to imagine what a Mistweaver Monk would have to do to prove worthy of such an implement. Shaohao already had Sheilun when he walked forth to undergo his trials and overcome several of the Sha (all save Pride, the one Sha he never overcame) — could he have even succeeded without Sheilun’s power? 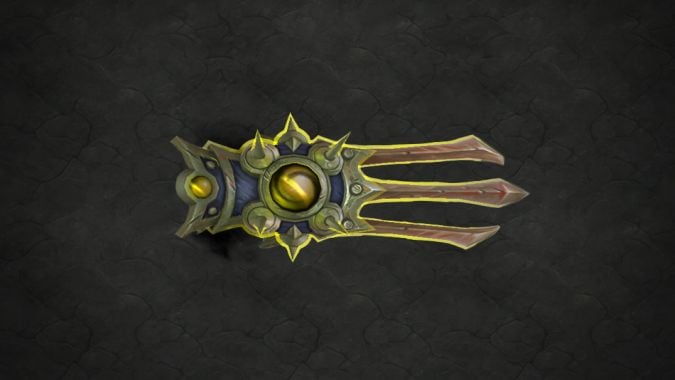 Fists of the Heavens

Thousands of years ago, the famed tol’vir smith Irmaat crafted a pair of magnificent handblades. Unsatisfied with his work, Irmaat tried to capture the essence of Al’Akir the Windlord to infuse into his blades. Al’Akir was not amused. To spite the smith, Al’Akir poured unspeakable amounts of raw elemental fury into the handblades. When Irmaat attempted to unleash their might, a great vortex sprang up, engulfed his city, and scattered the weapons to the winds.

These fist weapons are interesting in that they alone of the three Monk Artifacts are not linked to Pandaria in any way, but rather to ancient Uldum, which would have been at that time to the north and west of where Pandaria would have been. But we have seen Al’Akir bury Tol’vir cities before, so the story of these weapons rings true, and they do sound like they’d be the ultimate Windwalker weapons.  It’s also a fascinating way for Al’Akir to punish the smith — he destroyed the Tol’vir’s city by giving him exactly what he’d tried to accomplish and letting it destroy him and everything he loved.

Al’Akir the Windlord was a capricious figure, one of the Elemental Lords that served the Old Gods (although perhaps not entirely willingly — we’ve seen that Elemental Lords can be compelled to service by the Cipher of Damnation) and who certainly had their own agenda. During Cataclysm Al’Akir’s Throne of the Four Winds appeared in Uldum, home of the Tol’vir, and it’s likely that these weapons will potentially reveal more of a connection between the Windlord and these lands.

In interested in seeing how, with Al’Akir destroyed in his own Elemental Plane (and remember, Ra-den was the creator of the Elemental Planes), these weapons will be reclaimed. There’s no direct link to the Pandaren or Pandaria for these weapons, so perhaps we’ll come to learn of an entirely separate Monkish tradition that predated or evolved separately from theirs.

And that, at last, is a complete roundup of every single Artifact weapon coming in Legion and the lore behind each. I honestly have no idea what the next KYL is going to be about, but in the meantime, catch up on each class’ Artifacts in turn with these articles: