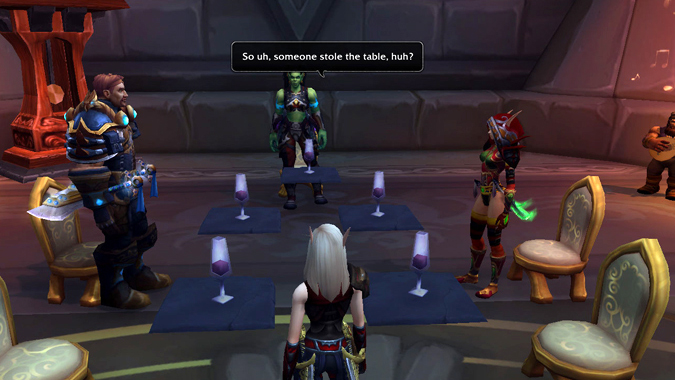 You know, while I really like the idea of Rogues being able to pickpocket each other in Class Halls and all that (I still haven’t fully tested that feature on the alpha), I’m kind of hoping we’ll see more added to the Class Hall itself. Specifically, more notable names or, because Rogues don’t exactly have a ton of notable names in lore, fun little side events. Like suddenly one day out of nowhere, all glasses, plates and silverware are mysteriously missing. Or all the paintings. Or all the books. Make it rotate, and never give away exactly who is pilfering all the good stuff. I don’t know, little flavor vignettes sound like fun to me. You know what else sounds like fun? Answering your questions, so let’s get to that. Please note: There is talk of Legion in this edition of the Queue, so if you’re avoiding anything spoiler-ish, fair warning!

Haven’t gotten one of the Lounge cushion toys again this year.  Has anybody? I already had all four, but I’m surprised I haven’t seen one again.  They may be a little more rare now if they were just last year

The Lounge Cushions aren’t found under the tree this year — I was surprised to see that! Instead, they have a chance of dropping from the Stolen Present you get as a reward for doing the Greench daily quest. Not a guaranteed drop rate, but you can still get your hands on them if you’re looking for them!

Q4tQ: What do you think they will do for weapons in the Legion pre-patch for those specs whose weapon types have changed? Do Survival hunters log in with no weapon equipped at all, and their previously equipped gun/bow in inventory? An in-game mail from Hemet Nesingwary with a green ilevel 640 polearm? Are Frost Death Knights with a two-handed axe going to spend the first few days farming for two new weapons while everyone else gets to jump straight into the new class changes and talents? I realize that everyone will eventually get an artifact weapon to use, but the pre-patch usually drops about a month before the expansion launches.

It’s already been stated that Survival Hunters will be taken care of. Presumably, they’ll get some kind of appropriate weapon when the pre-patch hits — I doubt it’s going to be a green, that wouldn’t really be fair to the Hunters that have spent time raiding Hellfire Citadel. I’m assuming it’ll be nice enough to get you through the pre-launch event and get your Artifact once Legion is launched. I’m guessing any other classes with new weapon requirements are going to get something similar, but we don’t really know for sure just yet.

Q4TQ: If you die in the DH starting zone you get a little snippet about your /immortal demon soul/. One of the things Illidan says is that your soul will wait in the Twisting Nether until it can find a suitable body to inhabit. If this is true what happens to demons whose bodies are destroyed? It seems that every time we see a major demon return they look exactly the same meaning they can’t just have usurped another demons body (Archimonde being the prime example here.) Does this mean that the Legion has fleshcrafters who create new bodies for the big guys if they get killed?

It’s possible — after all, the Legion was originally responsible for the Lich King and the Scourge, and that whole organization was rife with flesh-crafting. Or it could be that demons work differently than Demon Hunters — you may have an immortal demon soul, but that doesn’t necessarily make you 100% demon. You may not work in quite the same way as a demon that’s been serving the Burning Legion for centuries.

Any idea when we’ll see more beta invites roll out?

Not until after New Years at the very least — there’s a holiday break going on. Since the alpha is currently offline anyway, we might see some more invites roll out once they’ve turned the servers back on. I don’t really have a solid answer for you, sorry!

Do you think that they need to elevate some Forsaken NPCs that are less overtly villainous? There aren’t many – Alchemist Finkelstein, there in Zul’Drak. He was part of the Argent Crusade at any rate. At a push Lillian Voss, although she’s more about just killing undead than anything positive. I can’t think of any others that consider themselves Forsaken and aren’t dead (there was Rupert but he is deceased unfortunately).

Are you asking for “good” Forsaken? I don’t know if that’s actually possible. But let’s talk about Lillian Voss a little, because she’s a pretty fascinating character, and she’s definitely not what you’d call positive.

Lillian Voss wasn’t ever “good,” not really — she was raised as a particularly loyal member of the Scarlet Crusade. It wasn’t until after she died and was brought back that she started attacking the Scarlet Crusade, and it wasn’t because of any altruistic reasons, it was because her own father ordered her execution. Because she was undead. And being undead kind of severs any sort of family ties that might have existed. So her vendetta against the Scarlet Crusade — and necromancy itself — is a deeply personal thing.

Heck, she’s not even on the side of the Forsaken in Warlords. If you do her quests from the Lunarfall Inn in Warlords, she sends you to fetch her a knife, and proceeds to use it to “sever the tormented undead from this world.” She hates being undead. She hates anything that has to do with creating undeath. And she’d never, ever consider herself a Forsaken.

It’s kind of a testament to who that character is that rather than finding a way to end her “unlife” as it were, she’s instead continued to dedicate her afterlife to doing exactly what the Scarlet Crusade has been doing all along. In that, she’s probably the most devoted zealot the Scarlet Crusade ever produced. Ironically, it took raising her from the dead to do it.

To the Rogue master… levelling a new rogue. What spec should I go?

I wouldn’t call myself a master really! I know the class, I’ve been playing it for years, but there are plenty of people out there far better at the pushing of buttons and stabbing. However, I’d say that depends on what type of Rogue you’re looking to play in Legion. The class is getting a fairly substantial shift in terms of playstyle. If you like the idea of utilizing poisons, go Assassination. If you like the idea of stealth and subterfuge, go Subtlety. If you don’t care for the idea of putting poisons on your weapons all the time, and don’t really care so much about the sneaking around, go Outlaw…or, well, Combat for now, because it’ll be Outlaw in Legion.

Each has its own benefits — thus far on the alpha, the only Rogue spec available to play was Outlaw, and it was ridiculously fun. But I’ve been playing Assassination for years, and it has its perks as well. The only spec I’ve never really played that much is Subtlety. I know that from how things look so far in the alpha notes, Assassination isn’t really changing all that much. Subtlety is getting some reworking, but it’s Combat that is getting the major changes. However, Outlaw still plays much like Combat does today — the spell names are different, sure, but the rotation is similar enough that you shouldn’t have a problem transitioning when Legion is launched.