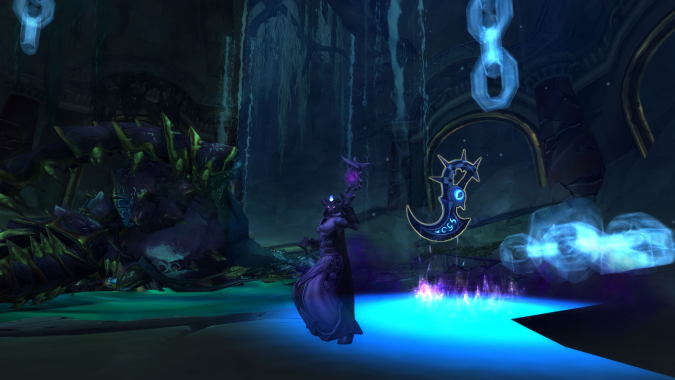 The World of Warcraft: Legion alpha , came back shortly after this post was originally finished and we’ve got plenty to discuss with regards to Shadow Priests. Last month, we took a (mostly) spoiler-free look at how Shadow’s gameplay is shaping up so far. This month, it’s all about how Shadow fits into the bigger picture of Priest scenarios and our class hall!

This post contains spoilers for the upcoming Legion expansion pack. If you do not wish to be spoiled, close your eyes, cover your ears, and run away in the opposite direction for the next 4-8 months.

Outside of the yet-to-arrive Broken Isles introduction, Legion kicks things off by introducing us to our Artifact quest. A certain cult organization is back and looking to do some pretty worrisome things in the name of power. It’s up to us to stop them, and our quest brings us to western Tirisfal where we must stop this cult from using an ancient blade to resurrect a terrifying agent of the Old Gods.

The quests and subsequent scenario themselves aren’t too difficult. Jumping directly into Legion made the first encounter with enemies a bit of a challenge, but that was mostly due to having to acclimate to a new rotation and ability set. I suspect that by the time Legion actually drops, we’ll all have had enough time with the pre-patch to avoid any sort of disorientation. After the initial hiccups, the scenario didn’t take too long to complete. 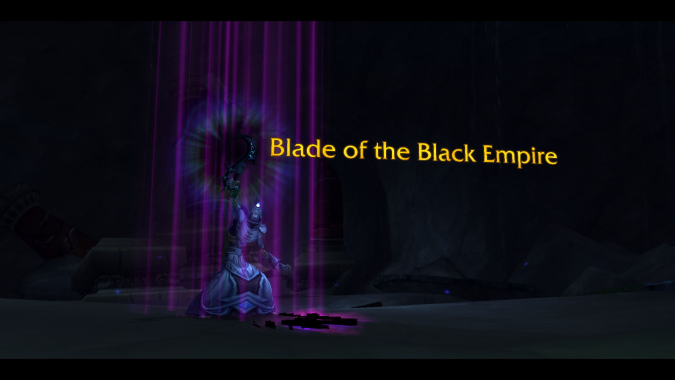 What’s working for it right now? The story. So much here has huge implications for more than just Priest lore in WoW. Old Gods, Naaru, long-lost lore figures — they’re all here and they’re all represented in a nice, concise package. On the gameplay side of things the quest wasn’t bad by any means, but it felt like it had unused potential. For example, while fighting your way to the big bad and subsequently during the encounter itself, you’re able to use Mass Dispel to instantly remove tentacles trying to make the fight difficult on you.

The first time I realized the game was pushing me to use an ability I don’t find frequent use of, I was very pleasantly surprised. It brought me back to the Warlock green fire quest that required complete mastery of the class and all its abilities. Unfortunately, it doesn’t expand much beyond that. Do we have to chain cast Mind Vision at any point? Do we have to use Dispersion to survive an otherwise unavoidable death? How about something that teaches us the pitfalls of our new Shadowmend ability? 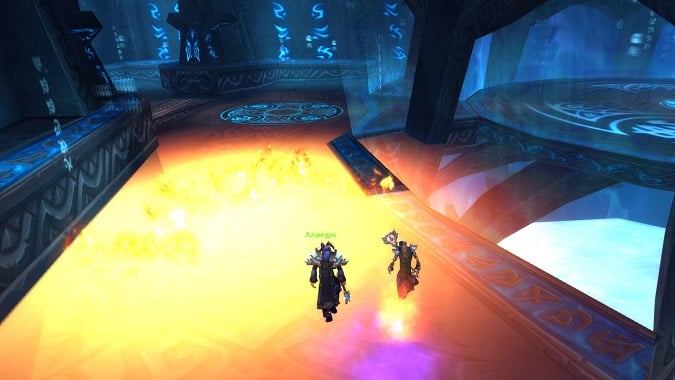 The answer to all of those questions is, “no.” In the Discipline artifact quest, Priests must use Levitate to overcome ground covered in holy fire. Granted, there is no Mass Dispelling required in their scenario but it falls in a similar vein requiring the Priest to use irregular spells. It’s a shame that such mechanics are split across the spectrum of the Artifact quests, though. I wouldn’t mind seeing more of these added to the Shadow Artifact scenario. And at a relatively short completion time, Shadow’s scenario could certainly be made a little longer by adding mechanics that force us to show off what it really means to be a Shadow Priest — full arsenal of abilities and all.

Shadow and the Priest hall

Once the Artifact quest has been completed, Priests are directed to their class hall: Netherlight Temple. If you haven’t seen it already or just want a refresher, the video from last month will give you a better idea of the exact layout of the entire hall. In short, though, the hall is divided into a Shadow section and a Holy section, with Discipline balancing in between the two. 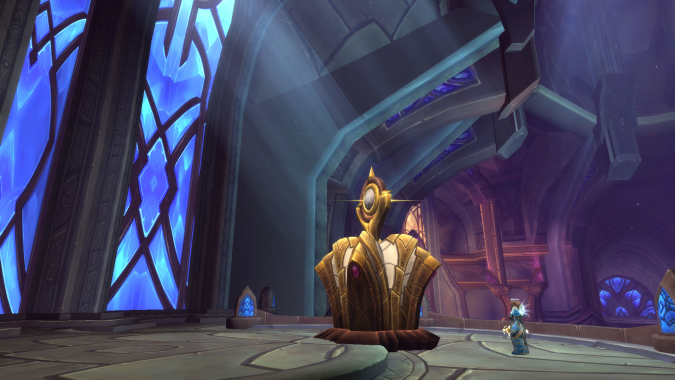 The above altar is where Priests must go to modify their respective artifact weapons — it is located in the center of our class hall and is known as the Altar of Light and Shadow. The altar’s design is very cool! Like most classes, you get to see your artifact floating above the altar any time you go to modify it, but more than just that, the altar actually opens up somewhat mechanically. It gives it a more “real” feel and takes it beyond just a zooming in on our weapon. There’s just one problem.

It’s the Altar of Light and Shadow — Light. And Shadow. Looking at it all on its own, it’s hard to see where the “and Shadow” portion comes into play, though. I’ve said before how important equal representation of the Priest specs is to me and, while the class hall overall dedicates even space to each spec, this is an excellent example of a place I’d like to see more done to really bring together the concept of the Light and Shadow in a balance with one another. On a similar note, our “Death Gate”-like spell bathes the Priest in a growing light. It’s a very cool visual, but it’s not Shadow. Is this nit-picky? Absolutely. But these small effects are what can make or break immersion for some, and if we’re going all-in on class fantasy, little aspects such as these are important to making that fantasy real. 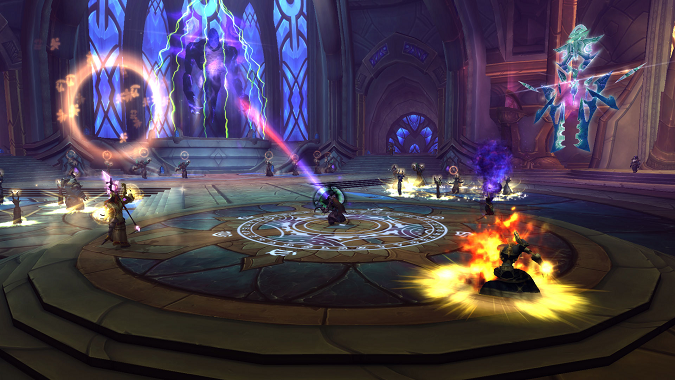 Another slight gripe I have with the class hall right now is the introductory quest to the hall has you doing some amazing things with respect to the Naaru, the Void, and the Light. The first time I completed the introduction to the hall on my Shadow Priest, I was blown away. I felt like my Artifact weapon was capable of the impossible and I’d stepped into territory never before uncovered. And then I completed the chain on a Discipline Priest. And I did the exact same thing with the Discipline Artifact. Except instead of using my weapon to drain Void energy, I was using my weapon to purge it with holy fire.

Now, sure, it’s hard to introduce the class hall differently. But I honestly would have rather had two NPCs with the respective Holy and Discipline artifacts standing in for actual players to emphasize the fact that all three specs need to come together and use their artifacts to complete the task at Netherlight Temple. Instead, each story has to exist outside the others to make sense. Has this happened in WoW before? Plenty of times. But it still made me feel quite a bit less special and important when I found out Discipline Priests did exactly the same thing I’d done and were told to have the exact same level of individual importance as I had been. 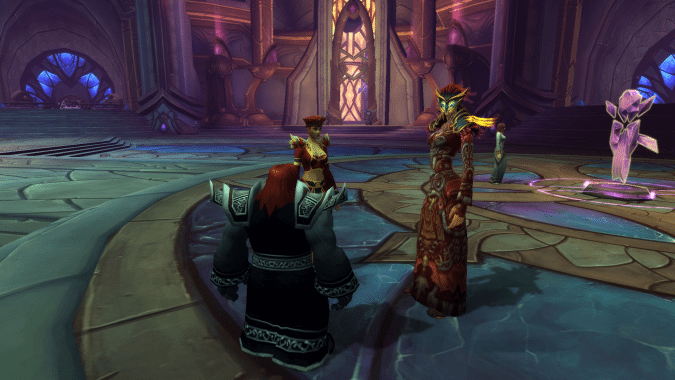 What about the rest of our class hall? Outside of a small number of named NPCs, the class hall is largely dominated by generic Priests of different races and orders. There are plenty of Shadow Priest NPCs wandering around, some Draenei Anchorites, a Hex Priest or two, and many others. Now, this is an excellent step in the right direction! There are Priests here from various sects that I hadn’t even considered appearing in the class hall until now. But I would love it if at least some of them received actual names and storylines to go with them.

For instance, one NPC in particular immediately caught my attention: Reformed Crimson Priest. I have no idea who this Priest is, but the implication that she may have once served the Scarlet Crusade intrigued me immediately. More importantly, is a Crimson Priest a different form of Priest, similar to the Raven Priests of Northrend? Does she use different forms of magic? What is her story? Every one of my garrison followers has a name. Not all have a story, but if the class halls are an extension of that design, I hope to see that represented in the NPCs around our class hall, especially when it comes to Shadow Priests who have otherwise had very little focus. Oh, and seeing someone like Talonpriest Ishaal in there would make me so very, very happy.

So far, we’ve got some pretty important NPCs helping lead the charge, and the implications behind their conversations have me very interested in what they’ve been up to all these years and where exactly their story is headed. But if there were ever a time to introduce new Priests (Shadow or otherwise) with their own unique backstories, now would be the time. 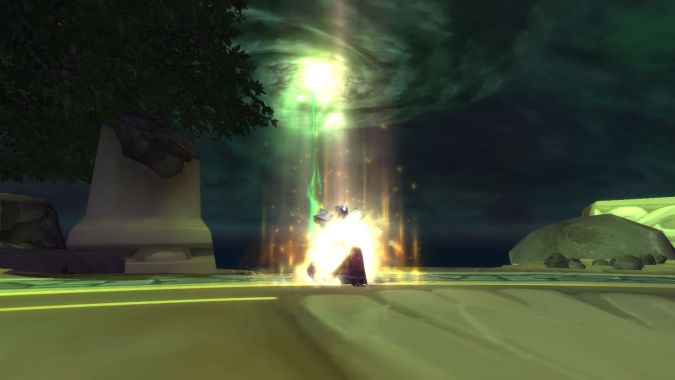 Right now, the Shadow experience in Legion feels promising but certainly not complete. There are a number of small tweaks that could be made to round out the whole experience and bring the class fantasy to life. I hope you’re not sick of me saying it because I’ll continue to say it until it’s true: with the classes and specs getting as much attention as they are in Legion, Shadow needs to be represented equally with the other Priest specs that I might otherwise pretend don’t exist. I don’t want to modify a terrifying blade of the Old Gods in a pool of light when a creepy, Void-shrouded room is a ten-second walk away. I don’t want to call upon the Light to teleport me to my devious hovel of dark scheming. I want to feel like everything I do ties to Shadow; my spells, my actions, my aesthetics — everything.

But, again, this is the alpha. It’s unfinished by nature. Lore-wise, I’m not sure I could be happier with the potential story to come out of all of this. Everything else? It’s off to a great start, it just needs a little polishing.

Until next time, always remember the old adage: don’t play a healing Priest.