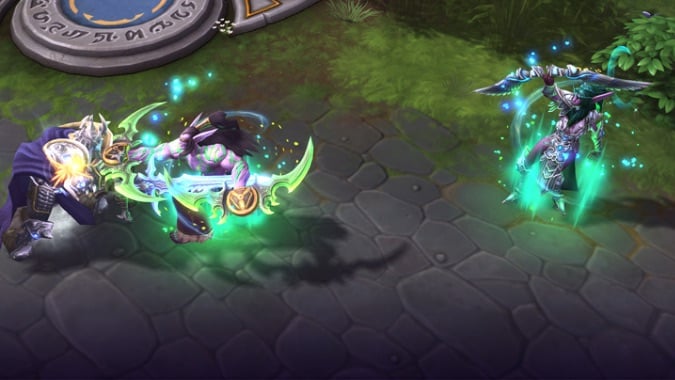 This week’s Heroes of the Storm patch notes focus on balance which means — you guessed it — a whole array of buffs and nerfs. However, it’s Support characters that are getting more mixups than anyone else, and on top of tweaks to individual characters there’s a redesign to Cleanse, a talent available to six out of the nine Supports. The new version is designed to prevent chain-stunning and makes a character unstoppable for one second rather than simply removing movement impairing effects and silences.

Of the individual heroes, Tyrande has the most changes. While Blizzard likes how versatile Tyrande can be, she seemed to do everything a bit too well. This means we’re seeing a lot of her abilities dialed down, but Light of Elune and Starfall have both gotten small buffs. Coming out on top of this patch’s changes is certainly Lunara, who now has increased health and health regeneration as well as a damage buff for her poison trait — and since we’re fans, we hope this means Lunara sees more play in the future.

But that’s not all: we also have buffs for Brightwing and Stitches; nerfs for Raynor; and a mixed bag for Malfurion. Check out the full rundown, with developer commentary, in the patch notes below.

Developer Comments: We want to give players more options to deal with the chain-stuns that have resurged after the scaling changes went into effect. We believe this increase in power to Cleanse should allow teams some counter-play against stun-heavy compositions.

Developer Comments: We are excited to see how many players are loving Lunara’s playstyle, but we feel she is under-tuned and somewhat punished by the current meta. Lunara excels when she is free to get basic attacks in, so we’re increasing her survivability to allow that. Also, her damage hasn’t quite met our expectations, so we’re increasing it to give her more impact. We’ve heard concerns about issues affecting her stutter-stepping and have changes planned that will also address this soon.

Developer Comments: Raynor’s damage is a little bit too high for how safe he can be while dealing it. He also has the option to talent into two ranged stuns which, at 1.5 second durations, felt too punishing to play against. These changes should help to slightly increase his overall talent diversity while making him a bit easier to take down when caught out of position.

Developer Comments: Arcane Flare has been in a bit of a tough spot for a while now. We were worried about giving Brightwing reliable damage and wave clear without having to talent into it, but realize we may have been a bit too restrictive. Since the ability does have a decently high skill-cap, we decided to really ramp up the inner-damage component and reward ‘bullseyes’ with a higher payoff. The changes should allow Brightwing to be a bit more active in lane, and enemies caught in the center of an Arcane Flare should definitely feel it.

Developer Comments: We feel players are having to rely too heavily on Tranquility in order to successfully keep up with other healers. We wanted to adjust more of Malfurion’s overall healing into Regrowth, which will hopefully allow players the option to explore more hybrid builds, potentially unlocking the power of Twilight Dream.

Developer Comments: Tyrande has been hovering around our radar for longer than we would like, but we needed to take some time to figure out exactly where we wanted to make changes. We are happy with how versatile her kit is, but feel she does everything a bit too well, especially since she thrives in the current stun-driven meta. We have changes targeted at improving her talent diversity while forcing her to rely a bit more on talents for damage or healing output. We are taking a cautious approach here, but are more than willing to make larger changes, if necessary.