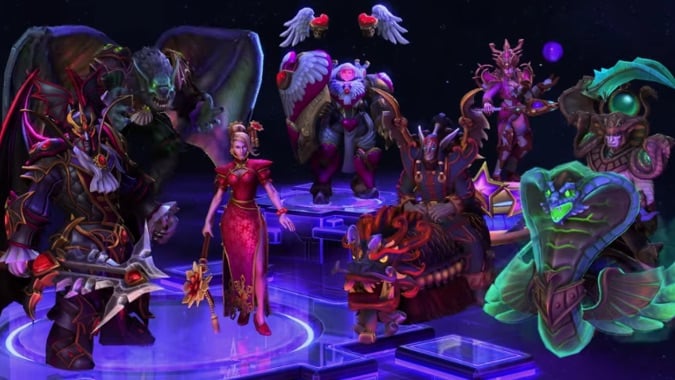 We already know that the next two heroes headed to the Nexus are Wizard Li-Ming and Necromancer Xul, but now we have a preview of their skins as well as other new content — we hope — coming soon. So just what’s heading to Heroes of the Storm? We’ve got new skins for Arthas, Jaina, Illidan and Morales, three new mounts, plus a Lunar Festival theme that’s likely a prelude to a special event for February.

Check out all the details below.

Beyond seeing the base skins and colors for Li-Ming and Xul, here are the rest of the new skins and mounts on display:

So when will we be getting these new goodies? The Li-Ming and Xul skins seem likely to arrive with the release of their respective heroes — possibly with the matching mounts, too. We don’t yet know when that will be (or which one of them will hit the Nexus first), but we should see a new hero in the next two to three weeks. The Lunar Festival-themed skins certainly suggest we’ll see some kind of Lunar Festival event coming in February — presumably with the mounts and skins arriving with it. If Heroes matches their Lunar Festival to WoW’s, that means sometime within the first two weeks of February. Love Doctor Morales seems likely to be the last of this batch on the release schedule, likely heading our way around Valentine’s Day.

We also expect Space Lord Leoric (above) to arrive in the Nexus this Tuesday, January 26th. He was datamined way back in December but hasn’t yet shown up, but the Heroes team just tweeted a new wallpaper featuring this Leoric variation with his launch date noted at the bottom of the poster.