The Queue: This header is Mitch’s fault 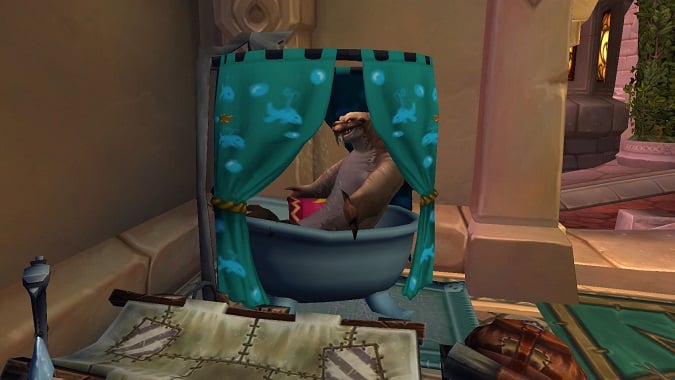 I had a funny intro all written up in my head and ready to go. All I needed was a solid Wrath of the Lich King screenshot and it would have been perfect. But instead you get this, because Mitch derailed my line of thinking by sending in this screenshot. Which we of course had to have an argument about, because this is clearly a gross invasion of that seal’s privacy.

I mean, really, that kind of behavior is just not cool. Leave the guy to enjoy a nice bubble bath in peace, wouldn’t you?

QFTQ: Has there been any sighting of Dog in the Legion Alpha? I’m concerned Blizz is gonna leave him behind and it is weirdly important to me that we don’t abandon him.

Unfortunately, none of us have seen Dog… at least not yet. When I asked the team if there had been any Dog sightings, Alex responded in typical Alex fashion:

I must be heartless because I don’t give a damn about that dumb nameless dog.

Alex’s heartlessness aside, I think I don’t think I’m the only one who’s attached to Dog. We found him on Pandaria and saved him from starvation, after which he followed us home to our farm. Then he followed us even further, to our Garrison on Draenor. Is he going to abandon us now? Or did we abandon him? (Cue crying over Jurassic Bark.)

If he doesn’t show up in Legion, I at least hope he found a good home somewhere — preferably with someone who doesn’t have a busy raid schedule and can stay home to scritch his ears.

Q4TQ: Where’s a good summary guide for all the changes/new features of Season 5 in D3?

Mistah Jay posted a link to Diablo 3’s official blog, and he’s right: that’s usually the best place to find basic info. The downside is that the info isn’t always in one place or organized to make it easy to find… so here’s the 101:

The Season started on January 15 and is set to last for about three months — so get to it if you want to complete your seasonal journey and collect your class set!

However, while you didn’t ask about it, the new season launched shortly after patch 2.4 went live — and the patch had its own new batch of content:

Does anyone else want to see the artifact system continue beyond Legion?

Though I definitely have some quibbles with the current Artifact system — like how we can get Artifacts for alternate specs and level them up — as a whole I really like it. I enjoy the story elements of picking up these powerful, lore-filled weapons and using them in defense of Azeroth… and having claimed them, it’s hard to see why we’d set them aside when the next challenge comes along. (Though the real question there is just what will be a bigger challenge than the Legion?)

So, yes, I hope the system continues and your Artifact weapon continues to level up with you… and prevent you from having to endlessly raid to get that one weapon that never seems to drop.

Q4tQ: Do you think they should FINALLY incorporate skinning into leatherworking, like disenchanting or cloth gathering? Since it doesn’t offer the crit bonus anymore, it seems like a gathering profession that is simply taking a valuable profession spot.

Did I say yes?

It’s just about February and Legion is still in “alpha”. Is this starting to feel like Warlords to anyone? Wondering what happened to “beta by the end of the month”…

Okay, I admittedly was not going to touch this hot topic but when I asked on Twitter if anyone had questions for the Queue he reminded me that he did. So here I am, trying to answer it — and hopefully without starting a war over it.

I am personally of the opinion that the distinction between alpha and beta is a semantic one. Yes, an alpha’s an earlier version of a beta, but betas can be pretty rough, too. I even think that it may be a good sign that Blizzard is letting players into the dev process earlier than usual, because they’re taking feedback on the game even in this unfinished stage and addressing player concerns (even if not as much as we’d like them to). So if the option is to have an alpha now or wait through weeks (or months) of silence before Blizzard felt the game was polished enough to be a beta… I’d rather have this.

But this is starting to feel like that long, content-less slog at the end of Mists. It’s hard to get enthusiastic about playing my live character when there’s all of this upcoming content… and it’s hard to get enthusiastic about playing or leveling alts because I’m just going to have to learn them all over again. If we wind up waiting until September for Legion… ouch. That’s a long dry spell.

Let’s just hope it doesn’t go down that way, because I’m already so bored of Tanaan Jungle.

Did you ever hear the old rumor of a quest that never got completed? If you were to imagine such a quest existing where would you expect it to have been hidden? Underwater? Ghost quest? 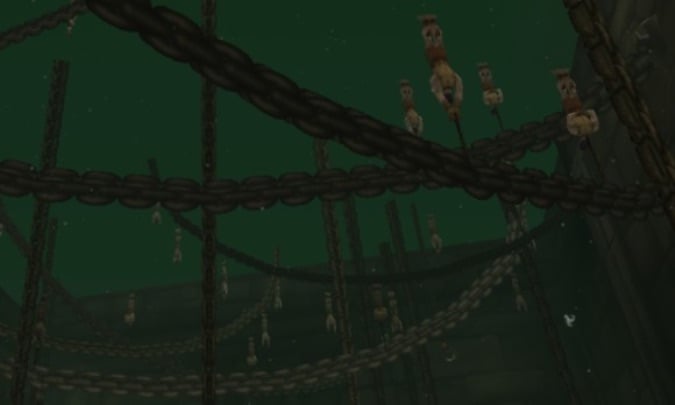 There’s a story behind the Karazhan Crypts. There has to be.

Probably involving your player character being followed around by ghosts you can’t see when you manage to sneak in and explore.

That’s all for today, dear readers. Be sure to check back tomorrow for another round of Q&A with Mr. Matthew Rossi!

Blizzard Watch is made possible by people like you.
Please consider supporting our Patreon!
Filed Under: Mitch’s Fault, Q&a
Advertisement