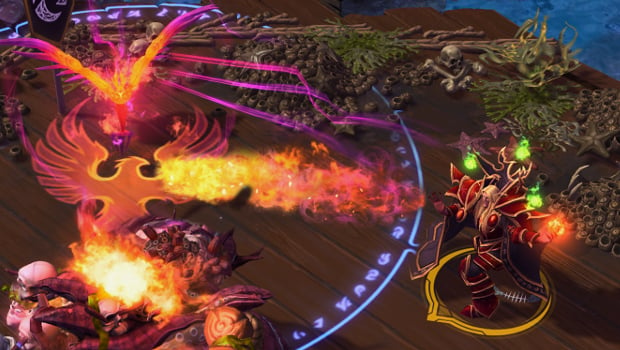 Another big set of balance changes is coming to Heroes of the Storm, and they’re almost all nerfs. Basic attack damage is being reduced on several characters (Jaina, Kael’thas, Thrall) and talents have been tweaked to encourage build diversity (Falstad, Nova, Diablo, Rehgar) and reduce win rates for top heroes (Thrall).

Kael’thas is hit hardest by these changes, with increased cooldowns on Phoenix and Pyroblast on top of a basic damage nerf — but Blizzard is still planning a Kael’thas rework soon, so we’re likely to see even more changes. Recently-reworked Nova is the only one who really comes out ahead in these changes, with buffs to Snipe and the Snipe Master talent. Also, while there’s nothing in this patch, Blizzard is already considering nerfs to the newest hero, Li-Ming.

Developer Comments: We’re starting to pull Basic Attack damage out of characters who don’t rely upon it, namely Jaina and Kael’thas. For Jaina, this will make less of her damage guaranteed and allow for more advanced plays. Jaina’s win rate is also a little on the low end, so we want to offset the Basic Attack nerf and add to her overall power by buffing Frostbolt and Cone of Cold.

Developer Comments: Kael’thas is a powerful hero with too few downsides. We’re nerfing several aspects of his kit, and are still planning a Talent overhaul coming soon™. The stun duration of Gravity Lapse is too long and guarantees kills more often than we would like. Reducing the stun duration makes it less frustrating to play against and adds a bit more counterplay for the enemy team. Phoenix is the drastically favored Heroic Ability right now, and it’s up far too often. By nerfing its cooldown, while also pushing Pyroblast to create more impactful moments, we expect there will be more situations where Pyroblast is the optimal pick.

Developer Comments: While we are happy with the variety of Talent options Nova has after the rework, her overall damage is too low. We like Snipe Master, and it encourages a different playstyle, but a single miss resets a ton of progress toward the Talent’s reward. With these changes, players will get more out of Snipe Master without having to rebuild so many stacks after a miss. We’ve heard a lot of community feedback and suggestions about not removing stacks as long as your Snipe hits something. We’ve discussed this, but feel that even if Snipe misses the intended target, it still hits something the majority of the time. By making this Talent sharp, with an obvious downside, it allows us to crank up the tuning and really celebrate flawless Nova play.

Developer Comments: Thrall sits near the top of our win charts, so we feel that small nerfs to his damage and most-picked Heroic Ability are necessary. We expect this to only slightly nudge Thrall down, as we’re otherwise happy with how he is currently being played.

Developer Comments: Rehgar’s new Talents have opened up a number of different strategies and builds, which has been exciting to see. We like this more aggressive playstyle, but noticed that the majority of Lightning Shield Talents are now clear winners. Focusing nerfs primarily on Lightning Shield’s damage will help to reduce Rehgar’s win rate and open up even more Talent options.

Developer Comments: Diablo has hovered near the top of our win rate charts for a while. We wanted to see how the Tyrande nerfs would impact him first, as we know those characters have very strong synergy together. We haven’t seen much of a dip in Diablo’s win rate, so we’re targeting a ‘must pick’ Talent with this nerf.

Finally, though Blizzard hasn’t made any changes to Li-Ming — despite plenty of player feedback saying she’s too strong — nerfs look like they’re coming in the future.

Li-Ming has only been available for a week, and we want to take a little more time to see how she settles into the metagame as everyone gets more experience playing with and against her. We agree with the feedback we’re seeing that she’s a little too strong right now, and while there are adjustments we’d like to make, we want to be sure that the changes we do make are healthy for the game. We’re currently looking to adjust several Talents, including Astral Presence and Ess of Johan, but we haven’t finalized these changes just yet.