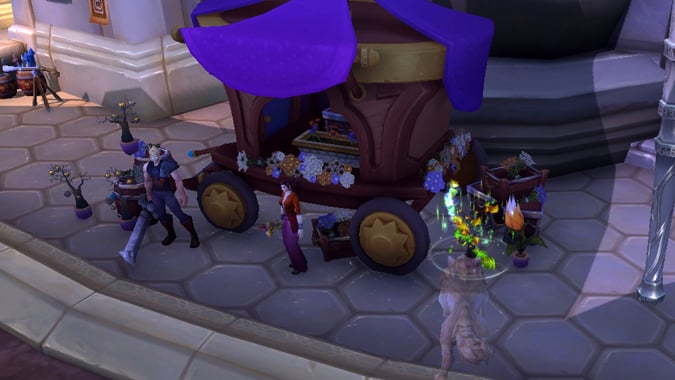 Planting seeds has changed just a little on the alpha — you can now replace someone’s chosen plant (like the yawn-worthy Foxflower) with a plant of your choosing (like the delicately rugged Fjarnskaggl). Of course I discovered this because Mitch decided to supplant all of my carefully cultivated Fjarnskaggl with his weeds. So I Fjarnskaggl’d the heck out of the city, and he sullied all my work all over again, and that’s…right about when we got into a full-blown plant fight right in front of Aerith’s cart. I don’t think she was amused. But the plant wars, oh the plant wars are coming, my friends. In Legion.

I rarely ask questions, but today, I have not one, not two, but three. Let’s see if that increases my odds of an answer.

Is there anything in WoD that explains what the deal with the Pale is? I’ve got Loremaster, and I can’t recall anything. It just seems to be a case of “here are weird creepy Orcs who are bad for some reason.” Though that would be entirely consistent with the quality of story-telling throughout Draenor, so maybe I shouldn’t be surprised.

I decided to nab one of your questions, because I like this one. And also because I know the answer and think the Pale are crazy interesting. Basically, when an orc shaman comes of age on Draenor, they travel to the Throne of Elements to get the blessing of the elemental spirits as a pilgrimage journey kind of thing. There’s a ceremony they go through, and some shaman uh…don’t make it through that ceremony. They see unearthly visions, hear voices…the kind of things most people associate with the Old Gods — and they just fall apart. These orcs flee their own kind and take refuge underground, transforming into the Pale.

The implication seems to be that it has something to do with the darkening naaru, K’ure, trapped beneath Oshu’gun. But it might also be an Old God thing — we don’t know, really! There’s a lot about Draenor that’s still a mystery, and will unfortunately continue to be a mystery, seeing as how we’re leaving it all behind in Legion.

QftQ: I think this has been raised before but the answer was unconfirmed, it still might be but thought I would ask. With the appearance of random legendary gear drops has anyone found any in the Alpha and if so can they be transmogged over?

We haven’t seen any legendary drops yet to my knowledge — and as far as I know, traditional transmog rules still apply in Legion. You can’t transmog a legendary. Maybe they’ll change that or address it before release, but for now, we still don’t have any solid information on that one.

Skill level, yes. They’re minor side professions, they’re kind of painful to level, and the majority of the rewards are account-wide anyway. As for recipes learned, I think those should still be on a per-character basis. Part of leveling a profession is paying to level it, which takes that gold out of the general economy — it’s a gold sink in its own, really minor kind of way. I feel like that should stay put. But if so many of the rewards you get are account wide (titles, mounts, etc) — why not make the skill level an account wide thing as well?

The only problem with it is that doing so blurs the lines between the advantages of having individual characters even more so than they already are. Which is…its own kind of unique problem, and that really comes down to a matter of design, and how the developers want the game to feel — and I’m not a developer or designer, nor do I work for Blizzard, so I don’t really know if that’s something they feel is unnecessary or not. It would be convenient though, wouldn’t it?

Can someone explain 5.1 rep grind and why Mitch liked it?  I never played MoP when it was relevant (ended pre-ICC and started again when 6.2 was launching) so I am kind of at a loss.

Mitch explained this already, but I’m going to add my own two cents here because hey, I like talking about patch 5.1. To me, it encapsulated the idea of a perfect reputation grind/daily grind/story vehicle. The way it worked was that you had a set number of dailies you could complete in a given day. If you completed every daily, then at certain points of reputation gain you’d be rewarded with a small chunk of non-daily story quests at the end of your usual daily run. The story being told in these quests is probably one of the most fascinating pieces of lore out of Mists — it’s the tale of a political power play, and an eye-opening look into just how far Garrosh Hellscream was willing to go for what he wanted…at the expense of everyone else in the Horde.

Because of the way it was laid out, it meant that as long as you were doing your dailies, you got that chunk of story every other day — which was compelling enough to make you want to see the next part. Plus, the next part was only a day’s worth of dailies away anyway, so it never felt like a really tough grind. You were gaining reputation throughout the quests, but for me, the reputation was almost an afterthought — I didn’t even pay attention to it. I was way more interested in seeing where that story was going to go.

Patch 5.1 also introduced commendations, which meant that once you reached revered, you could purchase a commendation, and all future reputation you gained for that faction would be doubled for every character on your account. This made grinding rep on alts way, way easier — but it had an added advantage. Because you were earning double the reputation, it meant you were getting those story quests twice as fast. So the last stretch of reputation grind from revered to exalted — usually the toughest grind of them all — was punctuated with new bits of story every day.

It meant that that last stretch wasn’t an overwhelming crawl, it was this exhilarating race to the finish instead. It worked flawlessly. I loved every second of it. And I really wish they’d put something like that in place again.

Q4TQ: What is one feature that *hasn’t* been announced for Legion (or WoW in general) that you wish they would implement?

For me, it’d be the ability to learn and unlearn any profession without losing progress you’ve made. Want to progress in all professions on one toon? No problem! You’d still only be able to have 2 professions active though. Maybe a 24hr CD put in place to prevent frequent switching.

Okay see I could suggest something here, but you just suggested something I’ve been wanting for so long that I can’t really do more than emphatically point at your suggestion and say “That. I want that.”

My rogue is an Engineer, has been an Engineer since I rolled the character back in Burning Crusade, and I cannot drop Engineering because if I do, I will lose all the recipes I have. And I have a lot of recipes. I have all of the recipes. I went out of my way to get them all — all the rare drops, all the hard to find recipes, all the ridiculous grinds. I do not want to go through that again. So I feel like I can’t switch out of Engineering, and it also feels like that whole “choice” thing they’re so gung-ho about isn’t really applicable here.

I’d say the cooldown should be longer, though. Like a month. A day isn’t really what I’d call preventative, a month on the other hand, a month makes you decide whether that choice is something you really want to make.

Q4tQ: A comment below by @Revnah regarding the gentleman in the header image got me wondering about people’s mental fan fiction. Now, relax: I’m NOT asking about the content (nor the rating) of said fiction, but I was wondering: if you were going to write something extensive — say, a novella or more — about a Blizzard character, who would you pick as your protagonist?

As much as I am enamored of Yrel, I think there’s a ton of story left surrounding Jaina. Who’s your pick?

Left and Right. Look, I just find them pretty fascinating all around. I wrote a really short story with the two of them a long time ago, but I still feel like there’s a lot of story they could tell — especially given their association with Wrathion. He’s another character that would be fun to write, but I almost think it’d be more fun to sculpt his story out of the people around him that have to interact with him every day.

Basically, I like stories about the people that things are happening to — the people that didn’t exactly have a choice in the matter of whether or not they’d like to be involved in said events. There’s another thing I’m working on that deals with exactly that, but I’m not in a position to chat much about it yet, other than saying Gilneas is a pretty fascinating place.