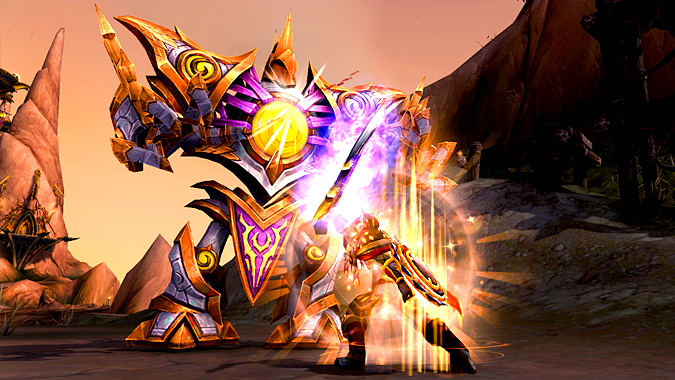 For all that you’re supposedly on an epic adventure of heroism, a lot of World of Warcraft can feel … well … pretty drab. You have to earn reputation to buy gear or collectibles. Khadgar sends you on quests to collect arbitrary numbers of Apexis Crystals. You need to trap animals to collect Savage Blood. You need to slaughter half of Nagrand for leather. They may be necessary parts of the game, but there’s nothing epic about these things.

So just what in the game does make you feel like you’re on the epic adventure you’re supposedly on?

In my case, it’s usually when I’m playing in a group. When things go wrong — maybe the main tank dies, maybe the healer is stunned, maybe most of your DPS got caught in the fire — sometimes you have these real “save the day” moments. Maybe an off-tank or a hybrid jumps in and keeps the boss from killing the rest of the group. Maybe the healer manages to pull everyone through. Maybe DPS blows all of their cooldowns to get a last second kill. Whether it’s a 5-player dungeon or the game’s toughest raids, those are always the moments that feel great — like you’ve really accomplished something.

And they’re the moments you really remember, too. I remember, quite clearly, fighting Terestian Illhoof in Karazhan in 2007. I was one of two healers, and when the other one died it was presumed a wipe — but the fact everyone took it for a given just made me more determined to pull it off. We killed him, rezzed everyone, and moved on. Nearly ten years and thousands of fights later, I still remember that fight, perhaps because at the time it seemed impossible. There are a whole host of bigger, badder bosses in the game I’ve fought that I didn’t get that feeling about. Bosses where you killed them, but doing so just felt like business as usual… not requiring any superheroic action on your part.

So tell me, fellow gamers — just what events in World of Warcraft make you feel awesome? What gives you a feeling of accomplishment or achievement? What are your most epic game moments?

Blizzard Watch is made possible by people like you.
Please consider supporting our Patreon!
Filed Under: Epic
Advertisement