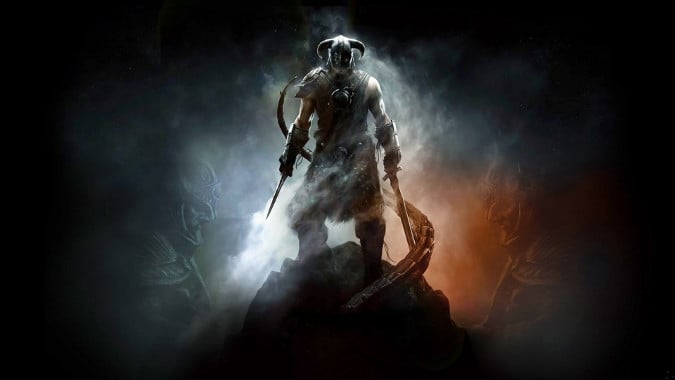 Lately I’m on an instrumental music kick. Been listening to a lot of Audiomachine this week, which led me back to Two Steps from Hell, and from there, I started thinking about one of my favorite theme songs of all time, the theme to the Elder Scrolls V, and so here we are.

This is the Queue. Let us discuss worlds unending.

Q4tQ: Would you like for Azeroth to add a St. Patrick’s Day-type world event?  The potential for fun quests featuring gnomes is there… Possibly a Brewfest 2.0-type staging area… the transmog items.  Who’s with me!?

I’ve chosen to answer this question personally, as if you were directly asking it to me instead of answering it in a general way, ala “I think that at this time” blah blah, you know that drill.

Here is my answer.

In fact, imagine a gigantic four letter word in front of that big no, and you’d have my answer in more concrete terms.

Look, I grew up with my mother’s large Irish family, and so, I feel uniquely qualified to belt out as many expletive laden nos as I possibly can come up with on the idea of a St. Patrick’s Day style holiday in WoW. First off, there’s no Ireland in WoW. Secondly, even if there were, I’ve been to Ireland and they view the way America acts on St. Patrick’s Day with a kind of confused disdain, because let’s be honest, it’s bloody terrible.

We have Brewfest for your ‘promoting irresponsible amounts of alcohol consumption’ holiday needs. Let’s avoid adding green food coloring to anything. Let’s avoid binge drinking, any potential thefts of any green cars and somehow getting said green cars into anyone’s small apartments, or any of the other things that I’ve personally seen (like stealing a horse and drying it green) happen on this day.

Let us spare the poor folks of Azeroth this one time.

Queue question: Is there a good repository of Weak Aura strings out there somewhere? I had to do a clean install and one of the things I lost was most of my WA strings. It’s almost moot with Legion coming, but that’s why I don’t want to just rebuild them all from scratch too.

Same question, but this time for the addon Rematch (pet battling).

I honestly can’t answer this question (I don’t currently use either addon) but I’m reposting it here because you didn’t get a lot of answers and I figure being on the front page can’t hurt, plus I’m interested in the answer myself, as I’d like to get bakc up to speed on WeakAuras.

Q4tQ:  If I faction change do I get to pick the new race of my character?

You get the opportunity to pick your race, your gender, and even recustomize your appearance so you look exactly as you would like to once you’ve chosen said race and gender.

For anyone who’s been keeping up-to-date on the spoilers for the Chronicle book:  What does the retcon tally stand at?

For one thing, fans (and especially WoW fans) overuse the urine out of the word ‘retcon’ – it’s only retroactive continuity in very specific circumstances, such as the introduction of the Draenei in The Burning Crusade. By my standards, you can’t have a retcon when you didn’t have any revealed lore to do anything retroactively with in the first place.

Chronicle (I have a preview copy in my hot little hands as I type this) tells us things we’ve never known about in the first place. All those KYL’s I wrote where I said ‘We just don’t know X’, this book tells us X. Unless your definition of a retcon is ‘tells us things we didn’t know before which we’d all assumed were one way because we didn’t know one way or another’ then this book contains zero of them.

Also, my word it’s an amazing book. I’m on my fifth rereading (eyes are bad, or it would be significantly more) and I keep finding new things. I may not be the red shirt guy, but I’m fairly well versed in WoW continuity, so for a book to keep surprising me like this? That’s a major accomplishment.

Q4tQ: Will you play Overwatch in open beta?

I may try it out in open beta, but I highly doubt I will purchase the game.  $40 is too high a price for me for something that is PvP only.

Sadly, with my field of vision as poor as it is at the moment, a twitch game like Overwatch is likely out of my reach for right now. I can see better on my TV because it’s further away so I might play on the Xbox One, but I’m not planning on it right now.

Please keep all explanations on this site to Mana analogies. Thanks!

No, for three reasons –

Regarding the “disposal” of Legendaries, I already came up with a way for Blizzard to “take away” our Class Artifacts from us at the end of Legion: we’re branded as traitors for making cross-factional class halls and surrender them before we go into Exile … on Argus.

Keep in mind, this isn’t going to be what happens. But I’m listening to some awesome music right now, and so I’m in a whole mood, so here goes — Matthew Rossi’s completely not canon in any way ending to Legion.

So we’re in the final raid of the expansion, the Tomb of Sargeras. We’ve used the Pillars of Creation to seal the portal, but it’s not enough — the full might of the Dark Titan is being exerted to tear open a colossal wound in our reality and let the Legion finally walk fully upon Azeroth itself. We’ve faced down the Nightborne, various minions of Azshara, demons loyal to Sargeras, even the Warlock King, an unholy fel abomination created via the souls of two Gul’dans in one body.  Now, Illidan turns to us atop the spire.

“There will need to be a sacrifice.” He takes up his Warglaives. “Tell… no. Tell no one. What I do today I do for myself, and…”

Distracted, he doesn’t see it coming as we brain him. He falls unconscious to the top of the spire. The portal grows all around us, nearly large enough for Sargeras to step through. We hand Illidan’s unconscious body off to Maiev.

“Because it has to actually be a sacrifice.” Shouldering our artifact, we turn to the portal. And then we fling ourselves through, to face the combined might of the entire Legion and die for Azeroth. The fight is a DPS race combined with a ‘disrupt the ritual’ mechanic, and at the end the portal closes… with us trapped on the other side, and about to be destroyed by the forces of the Legion entire.

And what happens next?

I have no freaking idea.

Anyway, that’s not going to happen. But I thought it was fun.

See you all Friday. Have a happy week. I’m getting needles in my eyes this Thursday, so… yeah. My Friday Queue is likely to be something all right.

Blizzard Watch is made possible by people like you.
Please consider supporting our Patreon!
Filed Under: Holidays, St. Patrick’s Day, The End Of Legion, WoW
Advertisement