New Lost Cavern map coming to Heroes of the Storm 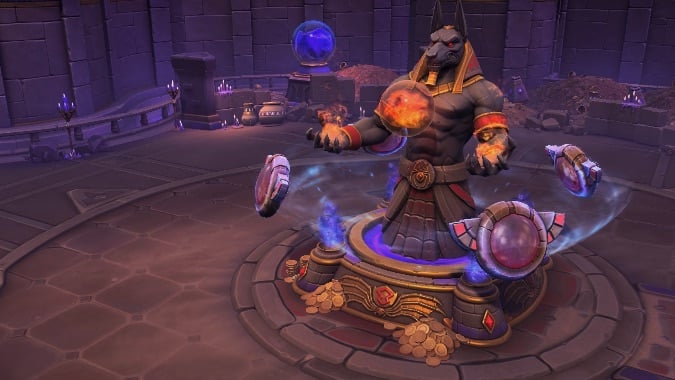 Coming soon to Heroes of the Storm is the new Lost Cavern map — and it’s unlike any map we’ve seen before. While another unique map may be a bit expected due to the wildly varying secondary objectives in current maps — Heroes‘ signature in the MOBA market — Lost Cavern will stand out starkly from the others because this time, there isn’t one. There’s just your team and theirs, head to head in a single lane, winner take all.

Players of other MOBAs may recognize Lost Cavern as being similar to the ARAM — “All Random, AllMid” —archetype. The second part of the acronym, “all mid” means that there’s only one lane with no other distractions. However, the “random” part doesn’t seem to be entirely preserved in the Heroes version. This type of map usually functions similarly to Auto Select, pulling your hero choice from one of the characters you own and the ones on rotation, but it seems in Heroes you can deliberately choose a hero whose strengths play toward the map — and avoid the ones which don’t.

In other games, where each normal match can push upward of an hour or longer, ARAM maps provide a fast alternative. But in Heroes, each match is relatively short to begin with, so while I would expect matches to go a bit faster, it’s mostly just going to serve as a fun, unique little PVP bloodbath.

The other difference from a typical ARAM map is that instead of queuing for this different map type, you have to specifically elect to join a custom game from a lobby or create one yourself. The official post on the Lost Cavern map spells out exactly how to get into a game, but frankly it sounds like a bit of a hassle without the automated system. There’s no ETA for when this map is joining the Nexus, but when it’s there, I’ll be looking for a lobby.

Blizzard Watch is made possible by people like you.
Please consider supporting our Patreon!
Filed Under: ARAM, Heroes Of The Storm Maps, Lost Cavern, Lost Cavern Map
Advertisement