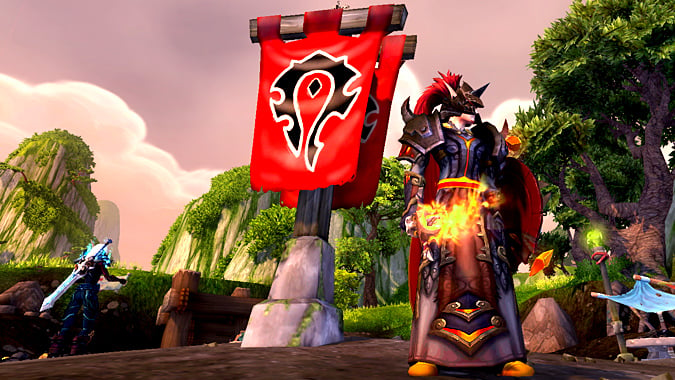 Back in December, we took an early look at Legion’s Holy Paladin PVP talents. That was prior to Holy Paladins even being available to play on the alpha servers, so we knew there’d be changes. Let’s take a look at our revamped PVP talents, and also at how our regular PVE talents and Silver Hand Artifact traits will affect us in PVP play! 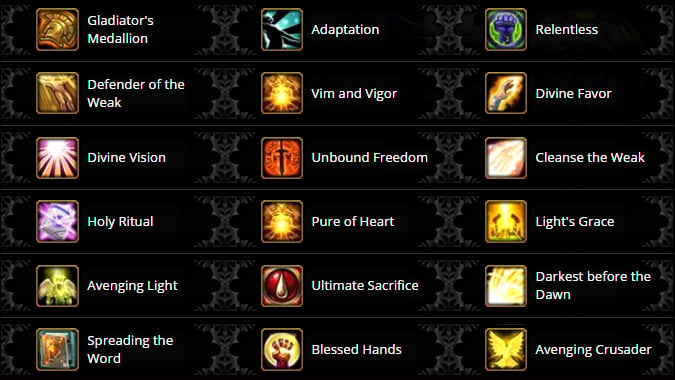 Most of our PVP talents haven’t changed much since Holy Paladins were unlocked on the alpha, but our final column of talents — the ones requiring the highest Honor Level — has undergone some major revisions. It now sports four shiny new talents, three of which seem very fun. Cleansing Aura also received a new name, and is now called Cleanse the Weak. Which is a bit insulting to one’s teammates, I think? But anyway.

Divine Favor replaces Inner Renewal, and in my opinion is a far more interesting choice. I always felt that Inner Renewal’s mana conservation was very out-of-place compared to the other talents on this tier, which are both throughput passives. Divine Favor seems like a wonderful trump card to have at our disposal, and on a fairly short cooldown, no less. A big, interrupt-proof heal every 45 seconds will no doubt come in handy in both arenas and battlegrounds.

Light’s Grace (replaces Luminescence) adds an entirely new utility aspect to Holy Light, and it’s an intriguing one. The substantial buff to Holy Light’s healing might be enough by itself to make Holy Light worth casting in PVP, instead of just relying on Flash of Light as is the current norm, but the stacking damage mitigation is a really cool side effect. As a bonus, Light’s Grace also has great synergy with other PVP talents like Divine Favor and Avenging Light. Light’s Grace is definitely my new favorite talent for that tier, as I don’t see the small bonus healing from Holy Ritual or the automatic dispels from Pure of Heart being anywhere near as useful — though Pure of Heart might be very valuable against certain arena compositions.

Darkest before the Dawn (replaces Eye for an Eye, which reflected 1% of damage taken) is the only new PVP talent I’m not enthused about at all. On one hand, I was glad to see Eye for an Eye removed — 1% reflected damage is pathetic — but a PVP talent that buffs Light of Dawn seems…unusual. I’m not a top-level PVPer or anything, but I really can’t recall using Light of Dawn…well, virtually ever in PVP.

And with Light of Dawn’s new cone-sized area of effect, I can’t help but think it’s going to be even less effective in PVP now, even with Darkest before the Dawn’s stacking buff. I think I’ll stick with Avenging Light to make up for the loss of Denounce (especially if I take Light’s Grace), or the incredible defensive might of being able to make a teammate immune to all damage for a short time via Ultimate Sacrifice. 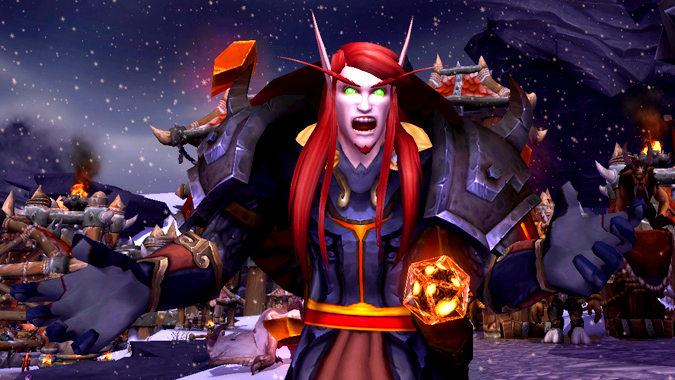 Increases all damage by 50%? Reduced cooldowns on Crusader Strike, Judgment, and Holy Shock? Atonement-style DPS healing?! And a one-minute cooldown??

My gosh. I guess Blizzard really DOES want us mixing it up in melee.

Now, we do lose Avenging Wrath‘s healing and critical strike buffs. And honestly, I’m not sure how Avenging Crusader’s Holy Shock cooldown reduction interacts with Sanctified Wrath‘s similar effect. But wow, this seems like it could be a fun ability to play around with, especially when you start considering synergy with PVE talents and artifact traits such as Holy Bolt, Beacon of the Savior, or Power of the Silver Hand. Make no mistake about it, as it stands right now, take the right talents and traits and you will be able to completely blow up enemy players with huge Holy Shock hits.

I have to admit, it’s going to be very, very difficult for me to pass up Avenging Crusader. Spreading the Word and Blessed Hands are still quite solid — though Spreading the Word did get nerfed, going from reducing all damage by 60% to reducing only Physical damage by 30%. But a talent that lets a healer cut loose and do some legitimate burst damage — while still healing! — just seems so amazingly fun. I’m suddenly a little more okay with the loss of Denounce and Hammer of Wrath. You even turn all glowing gold and translucent while Crusader is active! Sign me up! 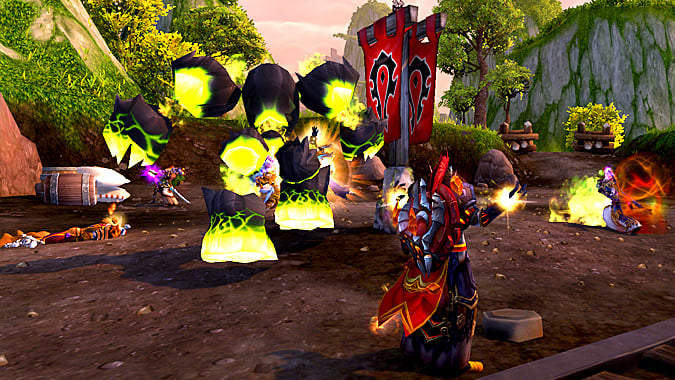 PVE traits and talents in PVP

Honestly, our Artifact traits are a bit on the boring side, and tend to be rather generic small buffs, cooldown reductions, and the like. As a result, the traits that will be useful in PVP are pretty self-explanatory, like Shock Treatment or Knight of the Silver Hand. Alpha testers have noticed that our baseline Artifact ability, Tyr’s Deliverance, can be interrupted. This is a rather significant drawback, especially since the heal can’t be controlled or directly targeted. Forum posters have pointed out that other Artifact abilities cannot be interrupted, so hopefully this will be addressed and fixed in a future build.

Mobility will still be a major problem for Holy Paladins in PVP, and it’s going to be very tricky for us to escape a determined foe. Despite this, I don’t see myself taking Divine Steed very often. 4 seconds of increased speed simply isn’t enough, and is easily countered by a single Death Grip or Charge. Additionally, Unbreakable Spirit is just too good to pass up. Besides, with talents like Avenging Crusader, it’s possible that we might end up actually wanting to be in melee.

Fist of Justice remains a strong PVP pick, as long as we can spare the global cooldowns to cast Judgment often. I also like Stoicism with Justice through Sacrifice, since Light of the Martyr has a ton of PVP value as a strong, instant-cast heal. We’ll want to be careful with it, of course, since canny opponents will be quick to leap on Holy Paladins who over-Martyr themselves.

Devotion Aura and Aura of Sacrifice both seem like strong PVP choices, though we’ll need to take the PVP talent Divine Vision to get any real use out of our auras. Devotion Aura seems perfectly suited for small arena teams or even in node-style battlegrounds where you’re only ever near a few allies at once. And Aura of Sacrifice is a nice blanket damage mitigation effect, which becomes extremely strong if the redirected damage also breaks crowd-control effects. (I’m not sure if it does or not.)

I’ve seen alpha testers call for Divine Intervention’s automatic Divine Shield effect to be disabled in PVP, that we should have to consciously use it. While I understand where they’re coming from, I don’t think it’s really much different than Cauterize or Purgatory. Maybe a little better, since we get Divine Intervention for free, and don’t have to spend a talent choice on it. I won’t complain if Blizzard opts to leave Divine Intervention as it is, but if they change it I won’t be too upset, either.

Losing Denounce stings, but as we’ve explored earlier, we are getting some other damage-dealing options to replace it. Nothing that comes with Denounce’s critical strike suppression, but if we’re being encouraged to go play in melee — and don’t have the mobility to have a say in the matter — we probably wouldn’t be casting Denounce very often, anyway. On the other hand, this trend just makes the loss of Rebuke hurt even more. Losing this core paladin spell severely weakens us in PVP, where the ability to interrupt an enemy heal or Polymorph can absolutely prove the difference between a win or loss. 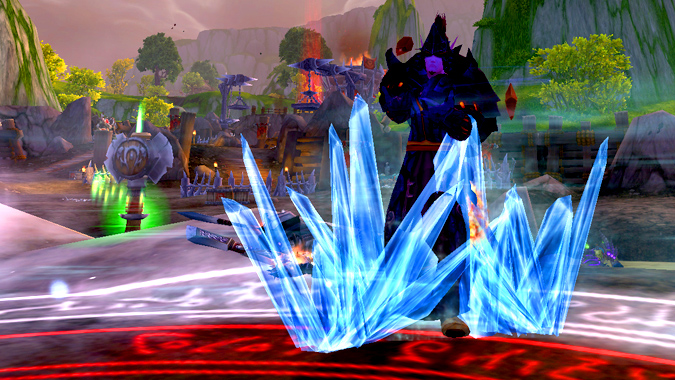 When Holy Paladins first showed up on the alpha servers, PVP players weren’t exactly sure what to make of them. Were they ranged healers who simply had no means of escaping being trained (focused) by enemy players? Did they no longer have any way of chipping in damage? Just how were they supposed to use their new Lightbringer Mastery when close proximity went against years of PVP healing instincts, which was to stay away from the hulking plate-clad people on the other team brandishing big scary axes?

However, as Blizzard continues to adjust and refine our talents — both PVP and PVE — and tinker with our Artifact traits, I believe we’re starting to get a clearer vision of how they want us to play in PVP. A talent like Avenging Crusader is a pretty big clue. A new, offense-laden playstyle is definitely different, and could be a lot of fun. I just hope it, and the fact that we’re being somewhat forced into melee, doesn’t hurt our actual healing capabilities. After all, while nuking that mage on the other team with a supercharged Holy Shock might be a blast, at the end of the day we are still supposed to be healers.