World of Warcraft: Illidan released yesterday, and let’s get one thing straight right away: This isn’t a bridge novel for Legion. Not…exactly. In fact, it’s much more than that, and a tale we’ve been waiting to hear since Burning Crusade — namely, the tale of what exactly Illidan Stormrage was up to while we were systematically dismantling his forces in the first World of Warcraft expansion. Players have often wondered why we didn’t see the villain pictured on the game box in the actual game aside from a few brief instances, and the final conflict in Black Temple.

The answer to that? He had better things to do. Better, more important things. 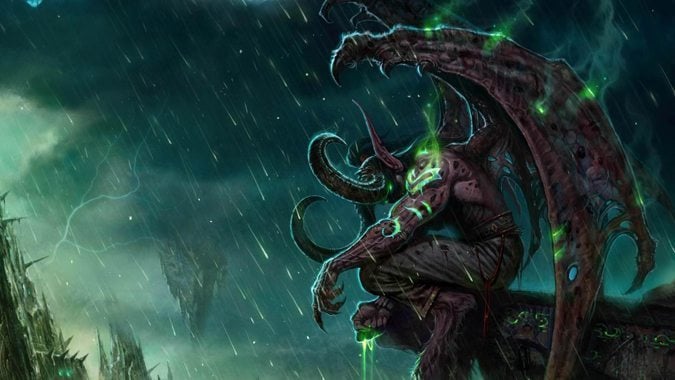 Illidan continues the story of Illidan Stormrage as started in the War of the Ancients trilogy, following the oft-maligned Stormrage brother after his imprisonment and subsequent release by Tyrande in Warcraft 3. Timeline-wise, it spans a period of history from the end of Warcraft 3 all the way to Illidan’s defeat in Burning Crusade. While Illidan is the obvious main character in the novel, it also checks in with Maiev and her eventual capture, as well as fleshing out Akama, his relationship with Illidan, and the reasons for his betrayal.

And most significantly, it tells the story of the Demon Hunters that Illidan brought to his side. In Burning Crusade, we only saw brief glimpses of these characters that patrol the outer terraces of the Black Temple, and — aside from Altruis in Nagrand — are rarely encountered elsewhere. You learn why they’re rarely seen, what Illidan actually intends for them to do, and get a horrific glimpse at how they are created — what it takes to become a Demon Hunter, and what being a Demon Hunter actually means.

That’s pretty much the only way in which this novel works as a bridge, but it’s not a bridge between Warlords and Legion, it’s a bridge between Burning Crusade and Legion. Players that are planning on playing a Demon Hunter the second they’re available should definitely pick up this book, because they’ll get a deeper understanding of the class that they’re choosing to play. It’s not all double-jumping fun and games, there’s some real depth to the class that Illidan explores in detail.

In fact, Tyrande is nothing more than a footnote, and by the time Illidan hits Outland, she’s a forgotten one. Why? Because Illidan has better things to do. More important things.

It’s that obsession that drives the book. It’s that obsession that drives Illidan — and when you realize what exactly he’s so focused on, every answer to every question you’ve ever had about Illidan and his motives suddenly snaps into place. In a way, I almost wish this book had been released during Burning Crusade, because it effectively tells the tale of the expansion from Illidan’s point of view.

What’s surprising is just how little time actually passed between the arrival of the Alliance and Horde in Outland, and Illidan’s eventual defeat in the Black Temple. While we may have spent months wiping in Serpentshrine, Tempest Keep and Black Temple, as far as the story goes, we were knocking on Illidan’s door far sooner than that.

Written by William King, it’s immediately obvious that the author is familiar with the source material — King definitely “gets” Illidan, understands Maiev’s motives and has a firm grasp on Akama as well. The book is delivered in bursts of short, staccato sentences that hammer in the importance of what’s going on in a delivery reminiscent of the way Illidan speaks. Words aren’t wasted, they’re focused, deliberate, intoned and delivered with all the grim reality of the situation at hand.

On the one hand, this works for overall flavor, and I appreciate the delivery. On the other, I’m the kind of reader that looks for an emotional connection when I’m reading a book, and I just didn’t get that with Illidan. There were moments when I felt a brief flash of sympathy, but I couldn’t really get emotionally attached to the characters in the way that I felt for Jaina in Tides of War, or Cairne in The Shattering, or even Thrall in Twilight of the Aspects. And I don’t know if it was the abrupt delivery, or if it was simply that going into this book, I already knew how it was going to end. I played Burning Crusade, I raided Black Temple, I knew what was going to happen.

The introduction of Demon Hunters brought a new and unfamiliar twist into the mix, but although we got some new characters, I didn’t really feel strongly for their situation. Partially because their chosen path wasn’t really meant for emotional investment, and partially because I kept getting pulled out of the book by continuity questions. Night Elves were definitely present and part of the Demon Hunter forces, but it was never really explained how they got from Azeroth to Outland in the first place. Maiev remembered Darnassus fondly, but Darnassus wasn’t founded until after Teldrassil was created — which was long after Maiev had left for Outland.

There are probably reasonable explanations for this — Darnassus may not be a special city name, but rather the kaldorei word used for a generic city. The Night Elves that eventually found Illidan and became Demon Hunters may have been defectors from Maiev’s forces. But none of it was really explained, which meant that I spent a lot of time deliberating potential explanations in my head when I should have just been reading and enjoying the book. 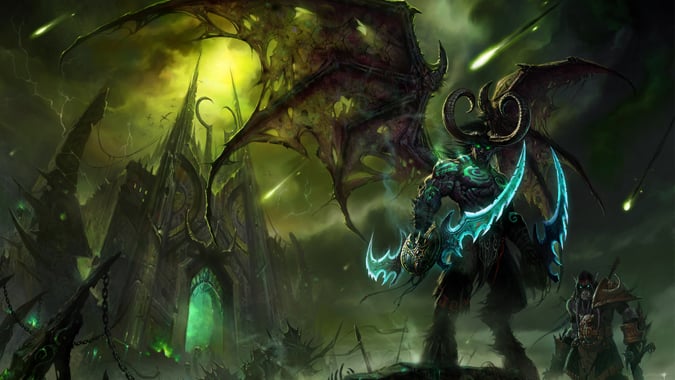 Despite a few flaws, Illidan is a good read. And for Demon Hunters at least, the book is a definitive bridge that leads right into the Legion starting experience. It doesn’t excuse Illidan’s actions, it simply explains why those actions were made, and leaves it up to the reader to make a final judgment. And it throws the nature of the Burning Legion, its size, its scope, and what exactly we’re going to face in Legion into sharp, horrifying relief.

Because, in the words of Illidan himself — we are not prepared. And given what we learn in Illidan, it’s questionable whether or not we’ll ever really be prepared to face the terrifying magnitude of Burning Legion at full strength. I don’t think that question is going to be answered in Legion, but I’m excited to see where the path leads from here.

World of Warcraft: Illidan is available for purchase in both hardcover and ebook formats, as well as audiobook format if you like to listen to your novels. If you’ve ever wondered what Illidan was up to in Burning Crusade, if you want to know more about the Burning Legion’s plans, or if you’ve ever had a question about Demon Hunters, I highly recommend picking up this one.