With the recent addition of Artifact Knowledge as a way to fill out multiple specs’ Artifact trees, now seems like a great time to take a look at just what said trees have in store for both Demon Hunter specs come Legion. Good thing for prospective Illidari, the Artifact trees are turning out quite nicely. We have a solid mix of options that will get DPS and tank Demon Hunters alike excited to fill out their trees.

So like the majestic lunging Metamorphosis demon hidden inside us, let’s dive in!

For those who need a brief refresher, Artifact talent trees all begin with one ability or effect that players gain right when they obtain their artifact. From there, the Artifact tree branches out in three different directions. There are three “major” Artifact traits and you will have to decide which to pursue first. Each is a major boon and each will benefit players in different ways. Choosing which will be most effective for your playstyle will be important in saving you unnecessary respeccing costs and making the most of your time on the Broken Isles. 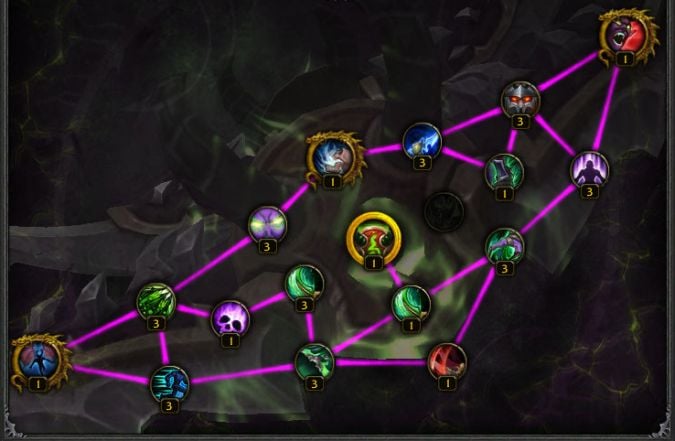 Let’s start with the Havoc traits. First up: Fury of the Illidari. This is the base ability we receive when first acquiring our Artifact weapons and in its current iteration, it causes us to throw our weapons around us and deal a whirlwind of damage to anyone near us over 3 seconds. At one point, this ability threw our weapon at a targeted enemy and using it again would cause us to leap toward our weapon and deal damage. Personally, the current version is much better since the leaping animation was only visible if you ran out of melee range. If you stayed in melee range (as anyone would), it felt like a wasted animation. By doing AOE, we not only have a unique (and cool!) visual but also an ability that does a much better job of emphasizing what exactly Demon Hunters are all about.

The quickest route to all three major talents will be going immediately left or right and then straight across in the opposite direction, so let’s move along to Rage of the Illidari, the counterpart to Fury of the Illidari. What at first might seem like a passive increase to our damage actually has a bit of finesse to it that makes it a powerful talent. This talent functions almost exactly as the DPS legendary ring does right now. That means there will be situations where it will be better to save Fury of the Illidari for add waves that can be taken down before Rage of the Illidari’s explosion — then the full damage of Rage will be poured into a single target (likely the boss). But also like the DPS ring, even mistimed Fury attacks will still be a sizable net gain in damage. Overall, it’s a great talent that toes the line between an outright bonus and a reward to skilled players very well. 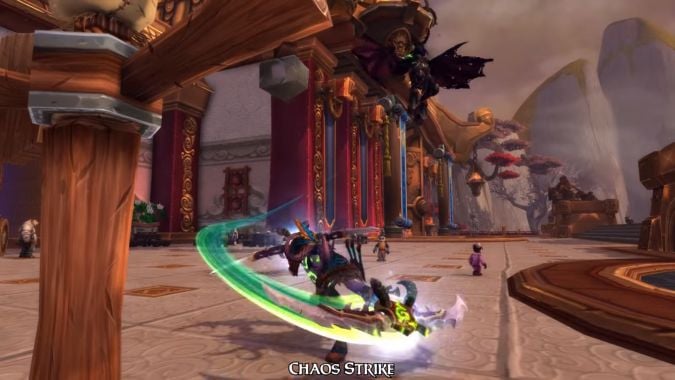 Of course, you might prefer Inner Demons as your first major Artifact talent — it’s arguably the easiest of the three talents to make work in your favor. It’s fairly straightforward: your Chaos Strike has a chance to “unleash your inner demons” that deal additional AOE damage. While this may slightly alter your rotation (the verdict is still out on that), it mostly just rewards you with extra damage for doing what you’d already been doing. In that sense, it’s the perfect choice for a passive damage increase. The best part? It looks awesome!

Lastly, there’s Anguish of the Deceiver. This one is a bit of an in-between as far as difficulty to maximize goes. Each time Eye Beam deals damage, it adds a stack of Anguish to the target which will deal damage once its duration ends. It’s another passive increase for just using your abilities as you normally would, but it also means you’ll get the most out of it when you can hit multiple targets at once, since the damage is not split among targets. More importantly, though, it actually means that you’ll suffer a bigger penalty for timing Eye Beam poorly or not aiming it properly. You’ll want to be even more aware of your target’s potential to move when you use Eye Beam, since it causes you to remain stationary for the duration. 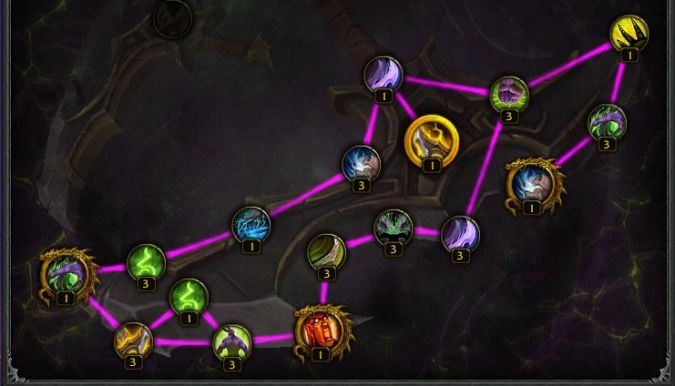 Of course, every Artifact has its own tree. Lucky for Demon Hunters, having two specs means only two trees to worry about and our other tree belongs to Vengeance, the tank spec. Again, we start with a base ability just for acquiring the artifact: Soul Carver. Soul Carver is one fel of a cooldown, too. Shattering that many Lesser Soul Fragments in that short a time means it’s an incredibly helpful way to get a quick health boost when you’re in trouble. The downside, obviously, is that it can lead to overhealing if not used carefully — though this can be compensated with proper talenting.)

Unlike Havoc, the Vengeance Artifact tree doesn’t quite loop around neatly, so it’s likely players will want to take Fueled by Pain first. And it’s not a bad choice to take! Soul Fragments are generated fairly often which means you’ll get decent use out of this; moreover, with the Soul Rending talent, this will generate a significant amount of self-healing on a regular basis. Even now, having Soul Rending is practically a must for me and being able to make use of it more often is even better. 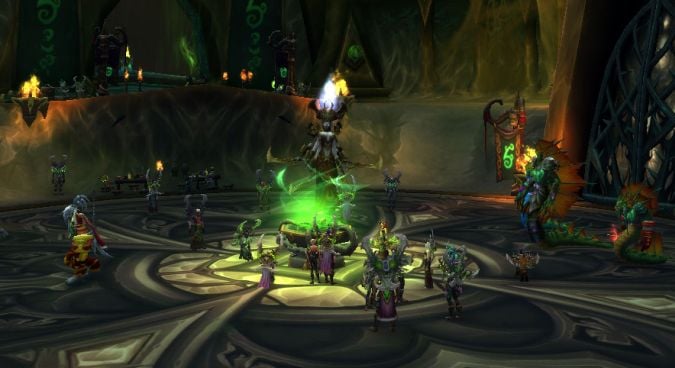 Next up is Charred Warblades, which causes you to heal yourself for 15% of all Fire damage dealt. Again, this is another straightforward talent, and it will add a significant amount of self-healing to your arsenal. It also means Immolation Aura becomes a very important ability with a bigger impact on your survivability — though the talent may change, it could potentially sway your normal talents in favor of Immolation Aura-based options. This talent also is a great way to increase your multi-target tanking viability, since the amount of healing is purely damage-based, on not split based on number of targets hit.

Lastly, Painbringer is the Artifact talent all by its lonesome. While at first it might seem like a relatively passive ability, its synergy with Soul Carver is worth noting due to the fact that (unmentioned in the tooltip) the effect stacks with each Soul Fragment. This means you can use Soul Carver to rip Soul Fragments from a target in preparation for a heavy-damage attack and then absorb them all at once for a 12% or higher damage reduction. I like this talent because it functions in the same vein as Rage of the Illidari: it can be used without much thought and still provide a benefit, but proper timing will differentiate the pros and make life easier on your healer. 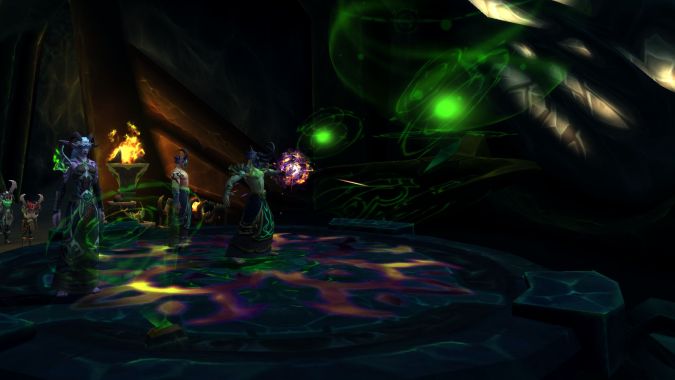 Overall, the Demon Hunter Artifact talent trees are shaping up nicely. Havoc’s talents seem slightly less passive, but never to the point that they become convoluted. Vengeance’s, meanwhile, are more passive but for good reason — tanking will be difficult as it is and adding complexity to that would not necessarily be the same as adding fun. The Vengeance talents are in a good place where you’re motivated to go for them but not intimidated by the way they may affect play.

One aspect in particular I enjoy about both specs’ Artifact trees is that they synergize well with talents in the regular trees. The only fear I have is that some talents may become no-contest choices because of this synergy. Still, though, the current Artifact trees both off a nice mix of passive, complex, and everything in between without ever feeling overwhelming. Time will tell if Blizzard redesigns any of these, but for now, they’re looking good.

That’s all for this month! If nothing crazy happens, I’ve got a fun one planned for next month so be sure to keep your blindfolded eyes peeled for the next Spectral Insight!