Among the Diablo 3-esque features of this expansion, in addition to the bounty-like world questing, are legendaries with specific class ability effects, sometimes spec-specific. While legendaries in Azeroth are nowhere near as prolific as they are in Sanctuary, they can still be kind of fun or useful if you get one. A Flaskataur selling all the legendaries has recently come onto alpha, so I got to buy and check out all the Warlock legendaries.

There are a few legendaries that are either multi-class or they have generic effects that any Warlock can use. We’re going to talk about these legendaries first before we dive into spec-specific ones.

Sephuz’s Secret (ring) — Diablo 3 fans have found plenty of familiarity already in Legion legendary references despite not realizing for a while that John Yang, one of the Diablo 3 developers, had moved to the WoW team to work on Legion’s legendaries. John Yang has gone by the Sephuz handle before, particularly in an FPS world.

Naturally, this movement speed boost ring will probably see most of its use in PvP. I’m not sure it’s entirely correctly implemented yet, as some of our CC spells that probably should work with the ring currently don’t. Fear will proc it, Howl of Terror will proc it, but Mortal Coil and Banish won’t. The only pet CC that works is the Seduce from the succubus.

Prydaz, Xavaric’s Magnum Opus (necklace) — Xavaric, if you remember, was the leader of the Jadefire satyrs in Felwood, and he used to have an ancient’s flute, which he probably acquired through tormenting his victims. He’s been gone since the Cataclysm happened, but here’s one of his great works that alludes back to that flute. Like a lot of references in Diablo 3, this item probably refers to an electronic music song.

This necklace gives you a huge 25% max health shield, provided you haven’t taken damage in the past five seconds. This is probably most useful in questing or perhaps world PvP, as I’m not sure how often this would be effective in instanced PvP or PvE where damage dealt to you tends to be frequent. 25% maximum health, especially for a Warlock, is fairly huge, so if there are any mechanics which deal massive damage, we’ll probably keep our eye on this in case cheesing happens. 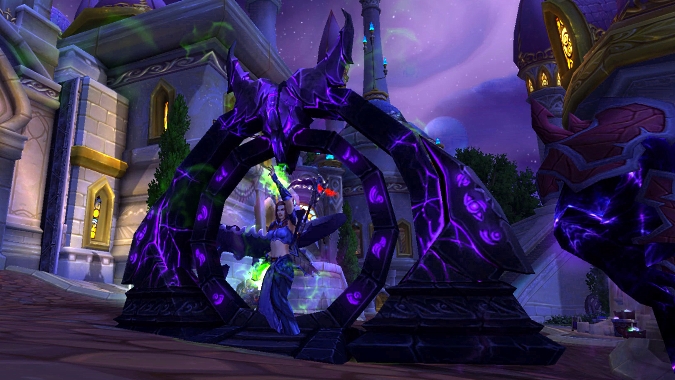 Pillars of the Dark Portal (pants) — After years of the long cast on Demonic Gateway, instant-cast Gateway is both weird and awesome at the same time. You get to take it twice before the 1.5-minute cooldown occurs, so you can take it one place there and back again if you want. Unfortunately, all of your friends still have to abide by the one-way rule.

Sin’dorei Spite (bracers) — It’s a big damage bonus after you summon your Infernal or Doomguard. It supposedly has a cooldown if you’re using controllable Doomguard/Infernal with Grimoire of Supremacy, but that effect doesn’t appear to work right now on alpha. I can’t get the buff to show up with the controllable Doomguard whether through summoning or just walking around for three minutes.

Norgannon’s Foresight (boots) — This is probably the legendary everyone will want as it lets your instant cast spells proc a moving-while-casting buff for your cast time spells. Currently it’s a bit bugged and channeled spells don’t consume the buff, so Affliction is having more than a little fun with it right now, but it’s a 15-second buff which gets consumed with the first cast-time spell you use while you have the buff.

It does appear to be limited to damage spells specifically, so spamming Life Tap to get it to proc isn’t going to be a good idea. For specs, instants you want to look out for to proc this legendary effect include: 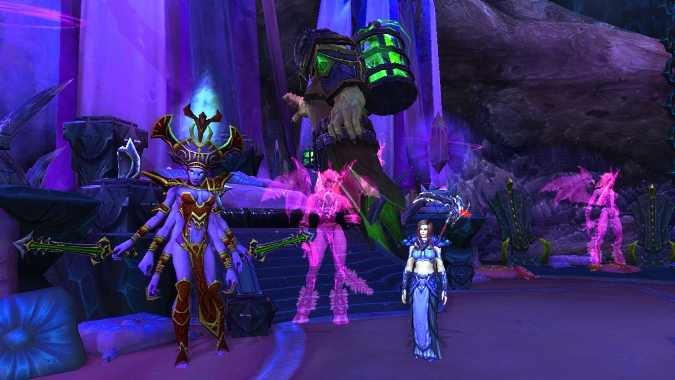 Hood of Eternal Disdain (helm) — It looks like the purple hood from Icecrown Citadel’s tier 10 set and it makes Agony tick once every 1.5 seconds instead of every 2 seconds. That’s very cool not only from a burstier damage point of view but also from a shard regeneration procs view.

Power Cord of Lethtendris (belt) — Lethtendris is that Warlock lady boss from Eastern/Warpwood Dire Maul who uses a web to siphon power out of Dire Maul. Maybe this is what’s left of the web? We don’t know. The effect is like a duplicate Soul Conduit effect, which is nice I suppose if you want to use another level 100 talent instead, or it’s even better if you use Soul Conduit and get nice refund RNG.

Sacrolash’s Dark Strike (ring) — Sacrolash is Alythess’s twin and the shadow eredar boss from Sunwell. She and her sister feature in the Warlock class hall campaign and eventually become champions for the class hall. Sacrolash’s ring adds a slow to Corruption, which should be particularly nice when paired with the talent Absolute Corruption.

Streten’s Sleepless Shackles (bracers) — This is probably another electronic music reference, since the Australian music producer Harley Streten aka Flume has a couple of songs relevant to this item and its flavor text, but it’s also perfectly relatable to Warlocks with our bindings, pacts, and limitless chasing of immeasurable power. These bracers give you a buff depending on how many Unstable Affliction debuffs you currently have out. If an Unstable Affliction falls off, the count decreases, so you have to actively multidot to keep this damage buff high. 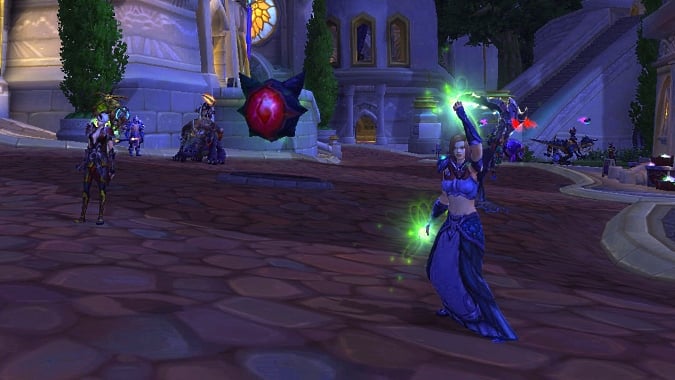 Recurrent Ritual (shoulders) — This is Demonology’s Soul Conduit-alike legendary, though it’s a fun addition to Call Dreadstalkers. Unfortunately, there’s a cooldown on Call Dreadstalkers, so you can’t just call an extra pair of Dreadstalkers after your first cast with this legendary. It does, however, give you two shards to put towards another pack of Wild Imps or for a Doomguard/Darkglare kind of combination cast.

Kazzak’s Final Curse (belt) — We can’t not have a reference to the Supreme Doom Lord himself in our Warlock collection. This fits Demonology perfectly as you won’t not have lots of demons out, so your multidotting with Doom will be excellent with this legendary equipped.

Wilfred’s Sigil of Superior Summoning (ring) — You had one job, Wilfred. Turns out he was just trying to lower the cooldown on one of his own demons, but then he summoned the wrong demon. This legendary turns the Doomguard/Infernal cooldown into a cooldown of around 1.5-minutes, assuming you’re keeping up with the demon-summoning. 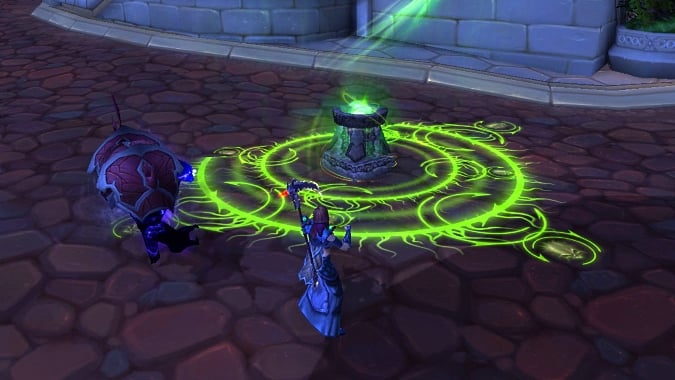 Feretory of Souls (belt) — This legendary says casting a Fire spell, which imps, wild imps, and infernals can technically do, but the main Warlock spells which proc this effect are all Destruction spells. All of the obvious Destruction Fire spells work, including the Channel Demonfire talent, so yes you can get two shards with Conflagrate and this legendary.

Magistrike Restraints (bracers) — If you were missing being able to have an AoE Chaos Bolt with Warlords’ Fire and Brimstone, this legendary will give you a taste of it back. Varo’then, from the flavor text, was the personal guard of Queen Azshara whom you killed so you could throw his sword into Mannoroth.

Alythess’s Pyrogenics (ring) — Alythess is Sacrolash’s twin and the fire eredar boss from Sunwell. Her ring naturally has to do with Fire spells, which completes the Immolate-buffs-Rain-of-Fire-which-buffs-Immolate cycle.

Odr, Shawl of the Ymirjar (cloak) — This cloak might be a Destruction Warlock’s favorite, especially if you get to keep your Havoc on a boss through the talent Wreak Havoc. A 15% damage increase kept up near-permanently? Yes please.