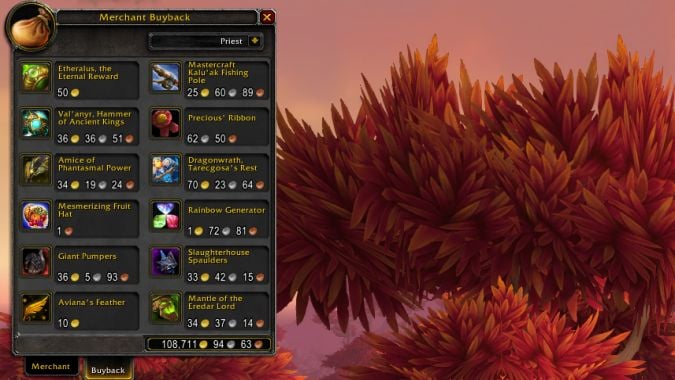 It’s no secret that I like collecting things. And with the advent of the Wardrobe closing in, getting rid of gear collected during mount-farming runs, from bonus rolls in raids, or wherever I might find them has happened less and less. As a result, bag space has gotten even more limited than it was before I knew about the Wardrobe. For a while, I just accepted this as a necessary evil if I wanted to maximize my collection before Legion. Now, though, I think I’ve reached the point where I’ll gladly farm appearances again after 7.0 if it means not dealing with bag-space hassles.

It’s not that I’m exactly looking forward to the idea of farming old places more than I have already, but it’s just stopped becoming worth it to pick and choose which gear I sell based on what armor type it is and again based on how much I actually like the appearance. It takes up too much time and will just exacerbate space issues for every other part of the game. It’s not the only thing I’ve cut back on doing until Legion — gearing alts, worrying about garrisons, etc. —  but it’s the most noticeable one. And I’m sure I can’t be the only one.

So what is it that you’ve stopped bothering with until Legion hits? Or have you not given up hope, instead firing on all cylinders to get every character prepped and ready for the second 7.0 hits live servers?

Blizzard Watch is made possible by people like you.
Please consider supporting our Patreon!
Filed Under: Legion, Legion Beta, Transmog, Wardrobe
Advertisement