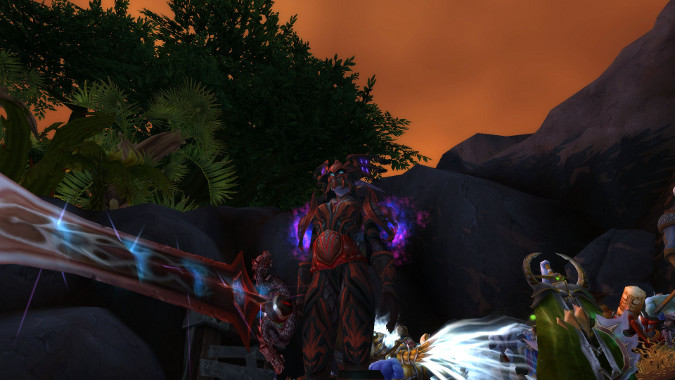 My leveling stream DK’s transmog game is on point and I’m very happy with it. We hit level 90 and started the Tanaan quests and man, I’m just thrilled with how I look. Firelands DK tier, Dragon Soul belt, Ashkandi, it’s a very matching look all told. I’m looking forward to the Wardrobe so that I can access all the 2h weapons in my various Warrior alts bags.

Listening to Narrow Escape by Celldweller. Reading your questions. Trying to answer some. This is the Queue. Let’s rock.

Nerdy game development QFTQ:  Do Demon Hunters have a unique model over regular blood/night elves, or are their horns and tats etc an “additive” thing? “hat happens when you switch back to the old style of models. Have they made an old-style demon hunter model, or do you get the highres additions added to a low res model? Do they just switch it out with a low LOD? It is burning me up from the inside!

However, I can tell you that the Demon Hunter uses a normal Night Elf/Blood Elf model and then layers additional cosmetic elements – tattoos, horns, blindfolds and so on. It’s not a wholly new model, it’s the updated Warlords models.

From what I’ve read so far in the illidan book, When a Demon Hunter consumes a demon for the first time, the demon is still ‘alive’ inside, taunting the elf into suicide/slaughter of their allies.

Has this ever been reflected in the alpha so far? If not, do you think it will be?

There is a moment in the Demon Hunter starting zone where you learn to unlock your abilities and are instructed to show the other Demon Hunters this new power, but one of them can’t handle it and is destroyed by the demon empowering him. It’s subtle and easy to  miss (which explains why Mitch, who played a Demon Hunter on alpha and presumably will on the beta) missed it. They also may have taken it out, I haven’t leveled a DH in a while.

Q4TQ: What, exactly, has been the rationale for reintroducing gold costs for spec changes? Have they given any *good* explanation? They took away reagent costs for talent changes… ok, cool that’s great. But why reinstate spec costs?

This seems really foolish, when entering a dungeon or queued event will change your spec *for free* if you so choose. Are people just going to wait to tinker around with spec action bars, etc until they’ve entered dungeons? I know it seems laughable, but just wait. People will be doing exactly this.

I don’t know what a GOOD reason would be for this to you. For myself, it seems aimed at soaking up a bit of gold for the convenience (thus, giving you an incentive to pick a spec and stay with it) while allowing you almost unlimited freedom in terms of talents within a spec. With Artifacts being the way they are, they seem to want to encourage people to stay in a spec for at least a few levels and making specialization switching cost some gold goes a way towards that.

But it’s up to you if you think that’s a good reason or not. Right now on the Beta it’s always free to switch to your Primary Specialization (Arms for my premade Warriors) and then it’s 15g to switch to one of your other two specs, ramping up to a maximum of 62g to switch specs after you’ve switched a few times. (It went from 15 to 26 to 41 to 62g as I kept switching just to see how much it cost.) If this works out to be the final price, in my opinion it’s extremely minimal and not worth worrying much about. If adding a trivial cost makes people think twice about switching, that might be exactly what Blizzard wants.

What are your thoughts on Blizzard phasing out secondary playstyles for specs with the Legion prepatch? Windwalker Monks and Frost DKs lose their two-handed, and Survival Hunters and Warriors lose their one-handed playstyles. Even though they can still equip other weapons, all those specs get some of their abilities limited to certain weapon types, as happened with Enhancement Shaman some time ago. This seems to show that it’s a change they want to keep after Legion.

I can see that it makes balancing across all specs easier for them, it’s an easy time for them to do it as we’ll only have our Artifacts during Legion anyways. But it seems like a lot of playstyles being phased out at the same time, making a lot of people unhappy.

I didn’t see it discussed anywhere, and had to burrow through spell information when a monk mentioned that Blizz told them that moving WW to a spec with two one-handed weapons was intended.

As a Warrior, I won’t miss Single Minded Fury. It never should have been there in the first place. Heck, I don’t even like Protection using 1h weapons. In my mind, Warriors should tank with a 2h and a shield like God intended. That said, I’m aware that I am not everyone, and that a lot of people had strong affection for SMF (as awful as it was) and so I’m sorry on their behalf to see it go. I mean, if we could only have Titan’s Grip or SMF, I know which one I rooted for, and it wasn’t SMF.

But that’s just one class, and one player’s opinion on that class. As a DK, I currently play 2h Frost. I never played WW Monk much but when I did I usually used the same weapon I did as a Brewmaster, a staff or polearm. So I can only say that I do feel like we’re being limited in the name of our Artifacts to a degree and that a little bit of flavor is lost when these options are removed. I understand there are balancing issues, but sometimes it’s worth failing to balance 2 1h weapons vs a 2h or even two of them to make the most people happy.

It’s not a deal breaker for me (but man, if Warriors had lost TG, it would have been) but I get not liking it.

ERK. I had such a great question for Matt or Anne that I’ve been saving and now I can’t remember it!

Q4tQ: How’s the Rossi eye situation going?  Any good news?  He mentioned on the stream about being blind in one eye; is that cause of treatments?

Okay, since you asked — I’m seeing some improvement after four months of injections, but usually after the injection I have two or three days of diminished vision due to light sensitivity and some bleeding. Right as I type this my right eye is essentially what they would call ‘legally blind’ — I could see you if you came up to punch me from that side, but not well, you’d be extremely blurry and I couldn’t make out any fine detail. This is going to improve, but not by much.

My left eye is significantly better than that and we’re hopeful I may eventually get full eyesight back in that eye. My right eye… well, it’ll likely never recover, but we’re trying anyway.

That’s the short version. Trust me, you don’t want the long version. Lots of bleeding in that one.

Q4tQ, Rossi version: Is it possible to determine the age a dinosaur had when it died? Do we know how long any dinosaur could live?

It’s possible to estimate the age of a dinosaur based on growth lines in the bones, which are visible under a polarized light source. We can then make what amounts to an educated guess based on our knowledge of avian and other archosaurs alive today (crocodiles and alligators).

I’m simplifying the process and how difficult it actually is because I’m no expert and we don’t have the space for a detailed answer. Essentially, the answer is yes, but with the caveat that new evidence could come and change our techniques and our estimates.

One of the best things about Legion that no one seems to be talking about is the sound design. It’s absolutely stellar, and vastly superior to anything we’ve seen in WoW to date.

That wasn’t really a question, but I agree with it. The sound design, which I always thought was good, is very good in Legion. Especially for certain abilities. My DK’s strikes all sound very nasty now.

Okay, that’s the Queue for me today. Talk to y’all again next Tuesday.

Blizzard Watch is made possible by people like you.
Please consider supporting our Patreon!
Filed Under: Legion, Transmog
Advertisement