With Legion, we’ll be getting Artifact Weapons of untold power and storied histories. But those aren’t the only weapons with deep ties to the lore of World of Warcraft. Whether it’s the infamous Thunderfury, Blessed Blade of the Windseeker (I said it), the awesome Sulfuras, the puissant Benediction/Anathema, the sister blades Quel’Serrar and Quel’Delar, the amazing Rhok’delar and the terrifying Thor’idal, the Star’s Fury, WoW has seen its share of amazing weapons.

So let’s not let the Artifacts blind us to the long histories of these implements of power. Today, we’ll talk about one of the first legendaries in WoW history, the hammer of the Firelord himself — Sulfuras, The Hand of Ragnaros. 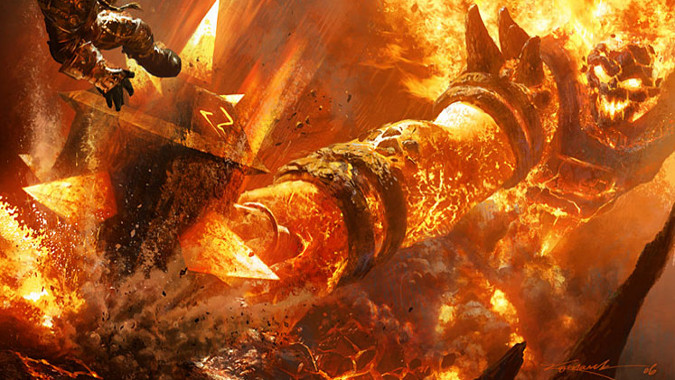 From the primordial flames

The history of Sulfuras is essentially the history of the Firelord himself. The mighty hammer is a part of its master, wielded by him as he waged war against his fellow Elemental Lords in the distant past of the planet. When Ragnaros first turned his burning fury against the Old Gods and their minions, it was with Sulfuras that he smashed their citadels to ash and crushed wave after wave of blasphemous foes. Yet even the power of the hammer could not counter the Old Gods’ truest source of strength — their nearly limitless numbers. In time, hordes upon hordes of N’raqi and A’qir did what no single foe could, and the Elemental Lords were defeated and enslaved by their Old God enemies. Thus did Sulfuras find itself lifted in service to these abominations.

But with the coming of the Titanforged came new foes. The Titan Keepers Odyn and Tyr brought war to the volcanic citadel of Ragnaros, and despite Sulfuras’ power their metal bodies proved impervious to his flaming might. Eventually Ragnaros was beaten, humbled, and in time banished from Azeroth entirely, to endure as a prisoner in the Elemental Plane. Master of what would be called the Firelands, he was yet unable to leave, and the Hammer found itself clenched in a fist driven by frustration.

In time, Sulfuras found itself in battle with the matchless Thunderfury, the weapon of Prince Thunderaan, the scion of Al’Akir. Through treachery, Ragnaros struck first, and Thunderaan was unable to retaliate. The hammer dealt the Prince of Air a blow that nearly destroyed him, and Ragnaros fed upon the defeated Prince of Air’s essence, confining what he could not devour into a talisman of elemental binding which he shattered into two shards, giving each shard to one of his lieutenants. 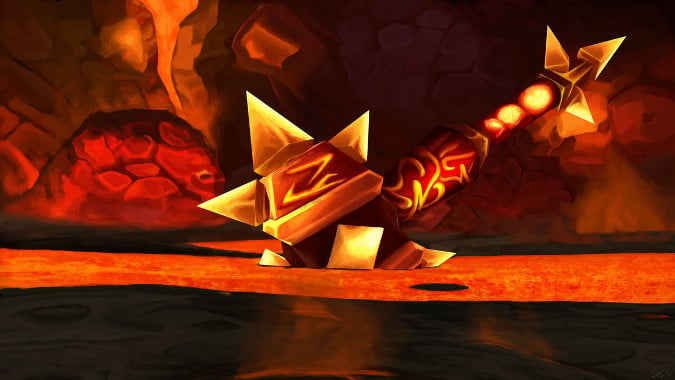 When Ragnaros exploited the summoning of Sorcerer-King Thaurissan and created the volcanic Blackrock Mountain in his furious re-emergence onto Azeroth, he brought Sulfuras with him. As he brooded, resting within the lava and regaining the strength cost him tens of thousands of years ago by Tyr and Odyn, the hammer dwelt with him, a searing, crushing reminder of his power. And when mortals drove him back to the Firelands, the hammer returned with him. (Some have claimed ownership of the Hand of Ragnaros, saying that a mere Sulfuron Hammer could be combined with the Eye of Sulfuras to recreate the legendary weapon.) Undoubtedly the Hand saw much use as Ragnaros reclaimed his demesne, the Sulfuron Keep, and established himself once again as unquestioned master of the Firelands.

Ragnaros continued to scheme to claim a position of power on Azeroth, in keeping with his nature. From the very beginning he contended with his brethren, the Old Gods, the Titanforged — as a being of pure fire, divorced from the Spirit Element that would have allowed him to cooperate with his kin, battle and destruction is all Ragnaros ever knew. Sulfuras was the perfect symbol of the Firelord, the ultimate extension of its very being. A great elementium hammer, covered in shifting runes, glowing like a mass of molten magma in its master’s burning hand. 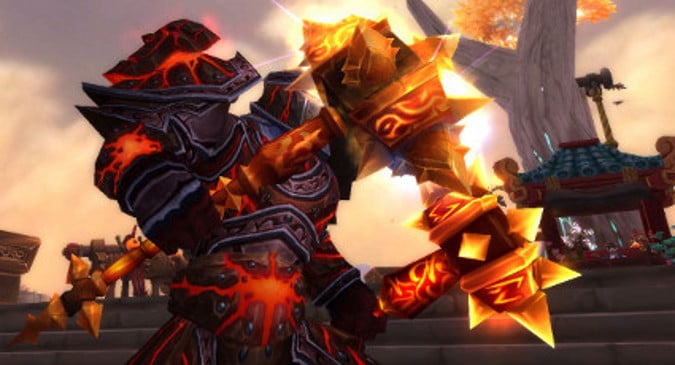 When at last the forces of Azeroth sought to prevent the Firelord from assisting Deathwing in his unmaking of the world, they found themselves facing Sulfuras. Despite it’s terrifying power, crashing down to send gouts of lava in waves, calling elementals to explode themselves against its spiky head, in the end Ragnaros fell and Azeroth was spared his fiery wrath. Whispers say that someone claimed his hammer, it’s fire almost spent with the destruction of the Firelord. But we have to remember — Ragnaros may have been destroyed, but he represented fire itself. And fire still exists. The power that drove Ragnaros will, in time, cause another to be chosen, elevate another Firelord to take his place. And on that day, the smoldering Sulfuras may leap into seething flames once again. Woe to they who seek to part the Firelord from his Hand.

Next week we’ll probably talk about some figures we’ll be seeing in Legion, but feel free to suggest what you’d like to see in our next look at weapons of lore.