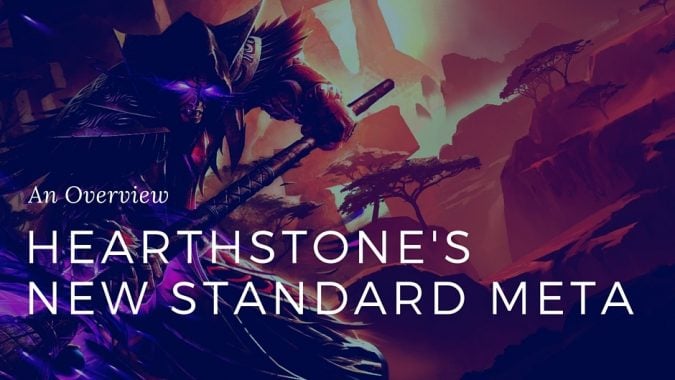 Now that it has been a month since Whispers of the Old Gods and the new standard format, we’re starting to notice that decks are beginning to stabilize. Dreamhack Austin was the first big tournament with the new restrictions and Chakki won that with an uncharacteristically control-oriented lineup despite being more known for his aggressive choice in deck selections.

Speaking of big events, last weekend was the Spring Preliminaries for the EU region and this weekend, the Americas will get their shot. What’s interesting to note is that EU players seem to prefer a slower, control style of play, but players in the NA region are going nearly full on aggro decks. I’m not quite sure if it’s a reaction to what the EU decklists look like. If you know the EU deck lists and suspect most of the competitors would bring similar lineups, you’d bring out some aggro decks to counteract it.

So without further adieu, let’s take a look at some of the popular deck lists in use today.

I have a tough time playing this deck. Being winless in 7 straight games using it, maybe it’s just beyond my comprehension. Either way, N’Zoth Paladin had an excellent showing at the EU preliminaries with 4 of the top 8 players using some variation of the deck. Chakki even won Dreamhack Austin with it in his lineup. It’s a slow control deck where you derive maximum value from playing N’Zoth to get additional value out of your Deathrattle minions (like Tirion Fordring and Cairne again). Forbidden Healing and Ragnaros, Lightlord both add an insane amount of staying power to the player by ensuring they stay healthy enough to get your bigger minions out at the late game stage.

Miracle is back! The deck is flexible enough to use finishers like Leeroy Jenkins, Faceless Manipulators, or Edwin VanCleef. Miracle’s game plan is to grow and hide something like Edwin and crush the opponent once they’re large enough. Spells are used to control the board and help chip away at the other player’s health before they get bursted down with a big minion.

Did you know? The deck name Miracle originated from a Magic: The Gathering deck known as Miracle Gro. One of the key cards in the deck was called Quirion Dryad which would gain +1/+1 whenever you played a white, blue, black, or red spell. Hearthstone has a similar minion which achieved the same effect: Questing Adventurer. The Adventurer benefited from spells like Preparation, Backstab, Shiv, and Cold Blood to help grow Questing Adventurer, Edwin VanCleef, or Mana Addict to obscene power levels while Gadgetzan Auctioneer constantly replenished the cards played. The deck has since evolved over time because of nerfs to cards like the Auctioneer, Edwin, and the Addict. Miracle Gro itself came from a plant fertilizer.

While seemingly straightforward to play, Aggro Shaman is one of the more technically challenging decks to play — at least, to me. The deck benefited from Eternal Sentinel and Flamewreathed Faceless debuting in the latest expansion. Most of the focus will be trying to overwhelm and inflict as much damage directly to the opposing player before closing the game out with a Doomhammer and Rockbiter Weapon combination.

Slightly slower than Aggro Shaman, the Midrange variant likes to use Thunder Bluff Valiant and usually one Primal Fusion. If things go according to plan, you get to humiliate your opponent by overrunning them with a wave of totems.

This is the current deck I’ve been using to climb the ladder. It’s consistent, stable, and fun. It does have its weaknesses, but it was enough to put me up to rank 5. Blood to Ichor, Ravaging Ghoul, Bloodhoof Brave, and Malkorok make their debut here — As long as Malkorok doesn’t give you Cursed Blade, anyway. Finishers tend to be Arch-Thief Rafaam, Ragnaros, and Grommash Hellscream are your closers. I run Varian Wrynn instead of the Archthief, but feel free to experiment how you see fit. The key to the game is to try to develop your board by around turn 5 while letting your Fierce Monkey and Bloodhoof Brave hold the line and potentially shielding your Frothing Berserkers.

Zoo is either a favorite of players or one of the more hated ones encountered on the ladder. Games tend to go by fast regardless of whether you win or lose. Despite losing Imp-losion, Zoo benefited from the inclusion of Darkshire Councilman and Forbidden Ritual. Swarm and overwhelm the opponent! Burst them down with Leeroy Jenkins, a Doomguard, or a Sea Giant.

Reno Jackson lists haven’t changed much other than cards rotating in and out of standard. They’re a popular alternative Warlock deck if players aren’t comfortable (or interested) in playing Zoo. Whispers of the Old Gods gave Warlocks a variant of Reno with C’Thun options.

Slowly making their way back into deck lineups, Freeze Mage continues the long standing tradition of trying to survive as long as possible before unleashing a torrent of spells at their opponent in order to directly to take them out with sheer direct damage. Some of the newer lists are now utilizing Malygos in their late game.

Viable in many of the different classes, C’Thun has been a new alternative win condition. C’Thun Druid is one of the more popular ones due to the ability to ramp up into big minions (and C’Thun) quick to finish off opponents. Tempo Warrior, Patron Warrior, and Control Warrior have a new younger brother with C’Thun Warrior due to the ever so pesky Ancient Shieldbearer. Warlock C’Thun was mentioned briefly earlier above with Reno Warlock. Priest C’Thun is another deck that’s been making the rounds due to the healing strength of Twilight Darkmender.

No N’Zoth moves or fancy Deathrattle tricks here! Midrange Hunter is the go to Hunter deck. Two Call of the Wilds are typically used to help finish off the opponent.

Sadly, there wasn’t much representation among Priests. There’s a few decks being experimented with between Dragon Priest and N’Zoth Priest. The reason why N’Zoth Priest is potent is due to it’s strength in countering N’Zoth Paladin (assuming it gets brought into tournaments).

That’s what the decks look like right now in Standard. The Americas and Europe have different preferences. Are you a standard player? What decks are you using?

Blizzard Watch is made possible by people like you.
Please consider supporting our Patreon!
Filed Under: Cthun, Hearthstone, J, Meta, Standard, Whispers Of The Old Gods
Advertisement