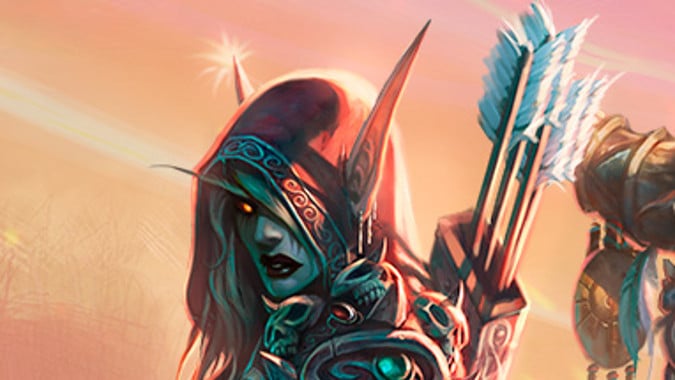 We talked last week about how Sylvanas dealt with her final attempt at revenge against Arthas, and the failure of that attempt. Yes, Arthas was dead, and yes, she helped bring it about — but it wasn’t her hand that fired the fatal arrow, and his ultimate demise left her unsatisfied and without purpose. A brush with death would give her a purpose, however. From this moment on, Sylvanas would dedicate herself to the thing she lost in Varimathras’ attack on the Undercity and Putress’ betrayal. Sylvanas would seek control of her own destiny and the destiny of her Forsaken subjects.

The Sylvanas who dealt with the events of the Cataclysm and beyond it was not the same Sylvanas who went to Northrend. In a way, the loss she suffered from the death of Arthas was to permanently change her, as was her need to operate on her own, without support from her long-time (if treacherous) ally Varimathras. The new Warchief of the Horde, Garrosh Hellscream, would waste no love on Sylvanas and her Forsaken, and that, too, would need to be dealt with.

But Sylvanas was Ranger-General once, the only force on Azeroth to successfully balk Arthas during his original campaign to bring the Legion to Azeroth. She knew a little something about waging war — for example, she knew how to outlast an enemy. And unlike when she fought to defend Quel’Thalas, there would be no traitors in her ranks this time. 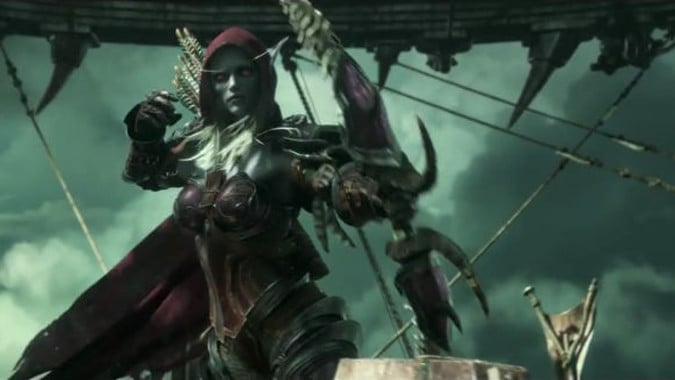 After Her Fall, Her Rise

When Sylvanas threw herself to her death atop the Icecrown Citadel, she saw a vision of her people’s fate should she remain among the dead. She saw them perish in flames, fed to the vanity and ego of the Orcish Warchief Garrosh Hellscream, who viewed the Forsaken as abominations whose deaths were an acceptable price to pay for victory.

It may be strange that someone who was willing to end her own horrible existence would take offense at that, and yet, Sylvanas was always a creature of duty. It was duty that forced her to stand against Arthas, and nearly succeed. It was betrayal that cost her that victory and her life.

So when the pact was struck with Arthas’ Val’kyr and Sylvanas was returned to life, she did so with the goal of performing this duty for her new subjects. For they at least shared her isolation, her pain and horror at what they’d become even as she felt it for what she’d become. This was revealed when the Emerald Nightmare attacked Azeroth, magically forcing Sylvanas to dream of what it would be like if her life as a High Elf was returned to her — she could only see it as another chance to be betrayed and destroyed. 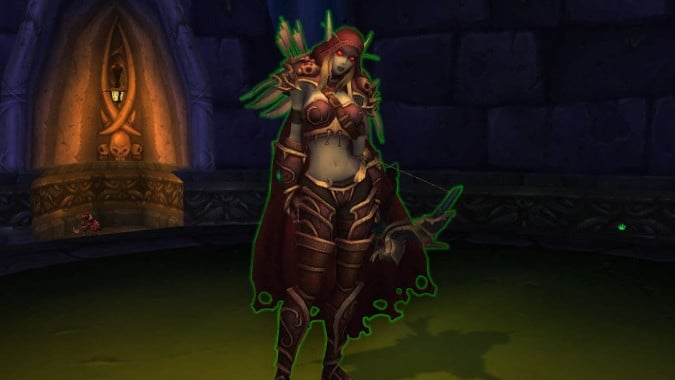 The War Against Gilneas

Returned from death Sylvanas took charge of the invasion of Gilneas. Hellscream treated her and her people with disrespect, but she bided her time and accepted Garrosh’s abuse stoically. It wasn’t a total success, but neither did it end in an Alliance counterattack that left the Forsaken utterly destroyed. Sylvanas personally executed Prince Liam — she was aiming for Genn Graymane, but the boy interposed himself and took her shot — and personally earned the enmity of the Worgen King and his subjects. And in the process she returned the three greatest traitors of the Gilnean people to unlife, Lord Godfey and his cohorts.

The battle for Gilneas raged back and forth, with the Alliance 7th Legion aiding the Gilneas Liberation Front in pushing the Forsaken out of Gilneas proper and back into Silverpine for a time. Sylvanas herself led the counterattack and executed a plan to kidnap Lorna Crowley, forcing her father Darius to surrender to Sylvanas and retreat back into Gilneas with his daughter, leaving Silverpine clear and the Forsaken in position to renew the conflict. This did not sit well with Lord Godfrey, who hated both the Worgen and Crowley, who he saw as responsible for his own death and unlife. Lord Godfrey went on to do the unthinkable.

Godfrey struck Sylvanas down from behind and retreated with those former Gilneans loyal to him to the former residence of Baron Silverlaine, the Shadowfang Keep, overrun by the original Worgen summoned by Archmage Arugal years earlier. But Sylvanas would not remain dead long — three of her Val’kyr allies would return her to what passes for life among the Forsaken, and convince her that the Val’kyr were the key to her people’s future. 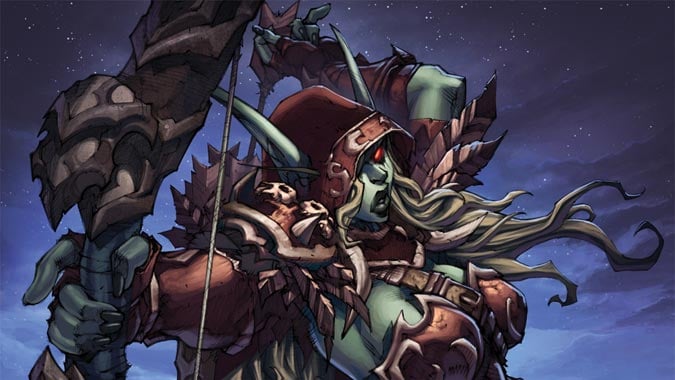 The Forsaken also took part in operations in Andorhal, where Sylvanas and the Val’kyr turned a Horde defeat into a Horde victory, driving the Alliance out of the Plaguelands, and Arathi Highlands, where the newly risen Galen Trollbane now served the Banshee Queen. Sylvanas went so far as to send Forsaken advisors to the Twilight Highlands to aid the Dragonmaw. But after her third death and rebirth in Silverpine, she seemed to grow more cautious. When Warchief Hellscream revealed to the assembled leaders of the Horde his plan to crush Theramore, Sylvanas objected on the grounds that the Alliance might counterattack against either the Forsaken or even the Sin’dorei, although Lor’themar Theron offered her little support in council — perhaps still angry at her having strong-armed him into taking part in the expedition to Northrend.

She sent an advisor only to take part in Theramore’s ultimate destruction, and during the campaign for Pandaria little was seen or heard from the Banshee Queen. Instead, she consolidated her power at home, watching as the Kor’kron who guarded her and her city grew into swaggering bullies and sneering secret police, alienating those who had been their allies before Warchief Hellscream filled their ranks with Blackrock Orcs loyal to him personally. Used to a delaying tactic, she deployed one now, letting others risk the ire of the mercurial and aggressive, but tactically brilliant Orc who led the Horde down a dark path.

When Hellscream finally overreached himself and the Trolls and Tauren led a rebellion against him, Sylvanas was quick to take advantage. Her anger at Hellscream’s insults and use of her people as fodder had been well concealed, but it hadn’t abated, and soon Sylvanas took an active role in the civil war, using the powerful Forsaken navy to help lay siege to Orgrimmar itself. It’s clear that without Sylvanas’ support, Vol’jin’s rebellion would have died on the ground, unable to breach the walls of Orgrimmar, much less dispatch the Warchief. 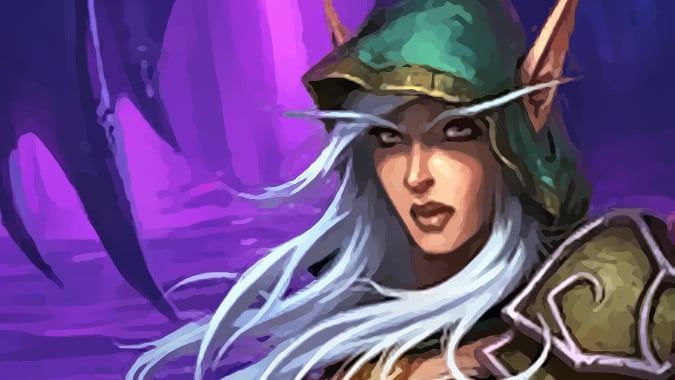 The Trial of Hellscream and the Ravaged Heart

Hellscream’s defeat led to what Sylvanas saw as a farce. Rather than simply executing the mad dog before it could bite others, as it had already proved it would do, the Pandaren wanted a trial. And so she was forced to watch as Baine Bloodhoof, one of the leaders of the rebellion that deposed Hellscream in the first place, served as his defender, attempting to exonerate him or at least avert his deserved death sentence.

As ridiculous as this was, and as much as it enraged her, her anger was as nothing compared to that of the only living Windrunner on Azeroth, her sister Vereesa. Vereesa’s grief and rage and hunger for revenge against Hellscream for his use of the mana bomb and the death of her husband Rhonin was so vast that she did the unthinkable. She reached out to Sylvanas for aid in finding a way to ensure Hellscream’s death.

At first Sylvanas doubted both her sister’s sincerity and her willingness to do what was necessary, but soon old feelings and memories of their time together as family began to surface, described by Sylvanas herself as almost akin to a phantom limb sending sensations even though it no longer existed. Despite being a dead thing, who believed her emotions destroyed by her existence as Forsaken, Sylvanas found herself at first looking forward to, than even seeking out these meetings with Vereesa to plot Hellscream’s death.

And soon she didn’t want to let them end.

Being what she is, Sylvanas worked to convince Vereesa that after Hellscream’s assassination, there would be nothing holding her in the Alliance anymore, and that she could come join Sylvanas in the Undercity, two Windrunners against the world. What Sylvanas did not tell her sister was that the Forsaken wouldn’t accept a living elf placed in a position at Sylvanas’ right hand — no, Vereesa would have to die, of course.

Sylvanas’ plan was simple, monstrous, and fully in keeping with her character. She would kill her sister in her sleep, as painlessly as possible. Then she’d raise her as a banshee just as she herself had been raised, teach her to reclaim her body and essentially become a second Queen of the dead. Together the two Windrunners would rule the Forsaken, destroying anyone who dared stand against them. Sylvanas would no longer be alone.

When Vereesa was ultimately convinced by Anduin Wrynn to reveal her plan to assassinate Hellscream, Sylvanas was dealt a blow even more grievous than the one Arthas had when he struck her down. Arthas had only killed her body, but Vereesa’s rejection struck at that flickering hope that somehow endured within the Banshee Queen’s breast, struck at it and dealt it a wound unlike anything she’d ever felt. Yes, it seemed to say, you are damned. You are alone. You will always be alone. Not even your sister can love you now. And so the Banshee Queen found herself victorious — her people’s future seemingly secured, her position unchallenged, the Kor’kron driven from the Undercity — and yet she had nothing she really wanted, and likely never would.

Next week we switch gears away from Sylvanas for a while. We’ll see more of her as we ramp up to talk about Legion, don’t worry.