Breakfast Topic: My Hunter At 100 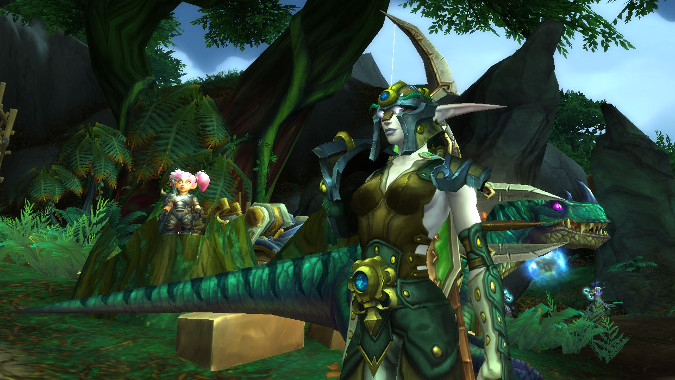 I won’t pretend that this is the result of hard work. No, my Hunter is at level 100 because I pre-ordered Legion and finally spent the boost. And that’s why I enjoy the character, and also why I’m utterly terrible at her.

It’s not that I don’t think she’s fun — she’s actually a lot of fun, even when playing with my wife on her Warrior (my wife’s got original Alpha cred as a Hunter, so while I do enjoy being able to needle her about how she plays a Warrior wrong, I don’t enjoy the inverse as much).  I enjoy taming new things, like my raptor Dakota in the header image, and I really enjoy how much easier it is to fight big elites that would likely give my Warrior a hard time. Just hit Mend Pet in between my other shots and Dakota tanks like a champ.

In fact, that’s kind of my problem with the Hunter so far. It’s absurdly easy to be okay at the class, and because I level boosted her, I don’t know enough to be exceptional at it. In fact, I’m barely even okay despite what I just said. I had to be reminded like six times that Misdirect exists, and even then I tend to use it and then hit Cobra Shot, which is the worst thing I could possibly do at that moment which isn’t just mooning the target. My rotation is a mess. Kill Command is there begging me to hit it and I forget and throw glaives at something instead.

Overall I feel happy that I finally have a ranged character at max level, but I definitely won’t take it into LFR or dungeons — no way am I subjecting a group to the spectacle of me on a Hunter. Do you feel like level boosts need to be better at teaching the class, and do you think Legion will achieve that with the trials system?

Blizzard Watch is made possible by people like you.
Please consider supporting our Patreon!
Filed Under: 100 At Last, Level Boost, Ranged, Tanaan, Tanaan Yay
Advertisement