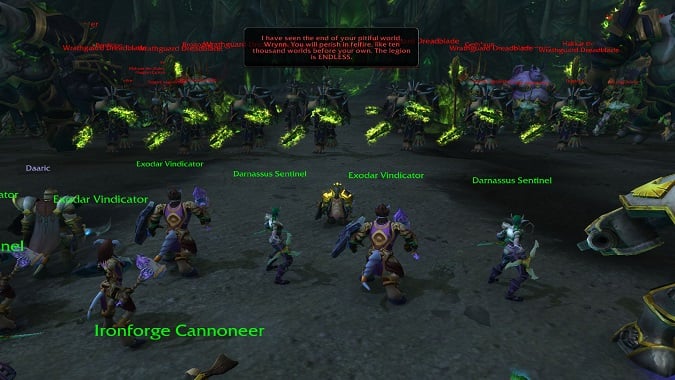 “Tell Gul’dan to empty the Twisting Nether. Let the demons come, a hundred or a thousand at a time. NONE SHALL PASS!!”

With patch 7.0 landing tomorrow, we will be looking at our Legion selves. Sure, we can’t go gallivanting around the Broken Isles just yet, but this is the utility belt we will strap on when the Burning Legion comes calling once more. Let’s check out what’s changing so we’re all ready to jump into the game when after the patch goes live.

The biggest change coming to Protection Paladins is the complete rework of our resource system. Holy Power is gone. It’s history. No, it’s mythology. Whatever it is, it’s outta here.  The implications of this change are far reaching.

When we had Holy Power, the generators — Judgement, Avenger’s Shield (including Grand Crusader procs), and Holy Wrath (if you took the Sanctified Wrath talent) — regulated our Shield of the Righteous Active Mitigation uptime. Holy Wrath is gone for good and Avenger’s Shield is no longer a builder which means our T18 4-piece bonus is only a DPS increase now.

The net effect is our Shield of the Righteous mitigation buff uptime will drop to 60% – 70% from the current 95%.

All tanks got hit in the survivability department and this is one of the big places we’ll feel it.

We also bid adieu to Sacred Shield, Bonus Armor, Improved Block, Bastion of Light, and Word of Glory. Our remaining Active Mitigation tools consist of Shield of the Righteous and a new spell called Light of the Protector (LotP) which replaces the function of Word of Glory buffed with Bastion of Light.

We get our wings back with Avenging Wrath and it buffs Light of the Protector making it a dual DPS and mitigation cooldown. This was bugged on Beta for several builds, but I’m going to assume that it will be fixed before the patch goes live.  Hear me devs — don’t let me down!

Our main cooldowns are Guardian of Ancient Kings (or Queens), now on a much longer five minute cooldown, and good old Ardent Defender. Divine Protection is gone, and its functional replacement, Eye of Tyr, won’t be available until we get our Artifact when Legion launches.

Critical Strike, which converts into Parry for Tankadins, has new synergy with Shield of the Righteous, but the current theorycrafting still has it lagging behind our more traditional secondaries. Stamina and Strength will come with every piece of gear you get in proportion to its item level. For secondary stats, the current thinking in the community is:

In practical terms, you are limited to the gear you have available to you. It’s unlikely you’ll farm up a new set of gear between now and Legion’s launch, and the differences between the secondary stats is small. Often times, the perfect stat distribution doesn’t exist on a piece of gear in the loot table. 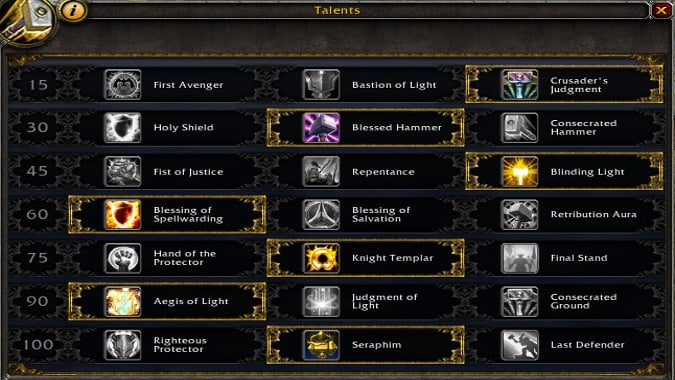 The new talent system is in. You can switch freely between Protection, Retribution, and Holy, but you can only change talents in a rested area (or with a reagent). You can switch from Prot to Ret and back to Prot all day long out in the field, but if you want to switch Fist of Justice for Repentance, you need to be in a rested area. There is a grace period when you first zone into a dungeon where you’ll get a buff called Dungeon Preparation Aura that lets you change your talents so you can swap into a group-friendly build.

Another nice quality of life improvement is the game will set your spec when you queue into a dungeon. When you queue up for dungeons you select Prot, Holy, or Ret. Your queue pops and you’re assigned the Tank roll. After you fist pump, you zone in, and you are automagically in Prot spec.

These are the talents I’m taking for the leveling push to 110, though I would make some different choices for a dungeon run or raid.

Level 15 Crusader’s Judgment: While Grand Crusader is no longer connected to our Active Mitigation, for leveling, we want damage and Avenger’s Shield is one of our harder hitting abilities.

Level 30 Blessed Hammer: For most regular mobs, you have enough interrupts between Rebuke and Avenger’s Shield that casters aren’t much of a problem. Blessed Hammer looks great and is helpful in pulling in more mobs to your Consecrate party and adds a small damage reduction on top of that.

Level 45 Blinding Light: If you take Blessed Hammer, all your damage sources are Holy damage meaning you won’t break the disorient effect. Blinding Light can be used to stabilize after you get a good group rounded up or give you a bit of a reprieve if you need a couple more seconds for your next Light of the Protector to come off of cool down.

Level 60 Blessing of Spell Warding: This isn’t so much a case of Blessing of Spellwarding being great, but rather that the other options on the row are completely useless solo play. Both Retribution Aura and Blessing of Salvation need you to have a party with you to function.

Level 75 Knight Templar: There are two major components to leveling: killing stuff and travel time. Knight Templar is nice for use in caves and tunnels where you can’t mount.

Level 90 Aegis of Light: Cone effects are difficult for other players to use and can often be hard to see in all the spell effects going off in melee. Out in the world, however, this gives you another cooldown to use for particularly tough rares and elites or if you over-pulled.

Level 100 Seraphim : I’ve been going back and forth between Seraphim and Last Defender. Seraphim is your default choice, and considering you can’t change out in the field, that’s what I’ve been sticking with. Last Defender is useful for those times you pull a whole camp and go to town with AOE. There are a couple of Murloc camps in Azuna and Highmountain that will have you licking your chops more than than a full rack of ribs.

The core of your rotation will be Consecration, Shield of the Righteous, Judgement, and Light of the Protector. You’ll open with an Avenger’s Shield from range and use the Grand Crusader procs as they come. Toss in Hammer of Righteous or Blessed Hammer as filler when you don’t have another button to push. 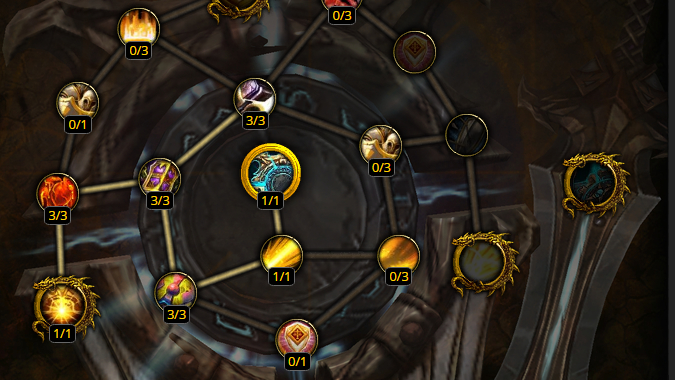 One you get Truthguard, you’ll start pouring Artifact Power into it and unlocking traits. It works like a tech tree from other games. You will eventually get all the traits, but not right away. I had less than half unlocked by the time I hit 110 on Beta and your mileage may vary.

Your first trait will be Truthguard Light’s. Then comes the fork in the road between Scatter the Shadows and Faith’s Armor. Thinking ahead to the Gold traits, Light of the Titans would be my first choice, but the path to it is lined with mitigation increases. Since I intend to level as Protection, I’m going after Bulwark of Order first since there are some nice DPS increases on that side of the tree. We go three ranks into Faith’s Armor, then up to Righteous Crusader. Next we move up to my favorite trait, Hammer Time. Then we come back for Resolve of Truth and unlock Bulwark of Order.

When you get relics, treat them like weapon drops and go with the highest iLevel relics you have available to you. If you have a choice between two relics of similar iLevel, go with one that gives you a DPS increase like Righteous Crusader or Hammer Time.

That should get your ready to face down the inumerable forces the Legion will unleash upon Azeroth. She needs her heroes now more than ever.