The Queue: My Last Night In Tanaan 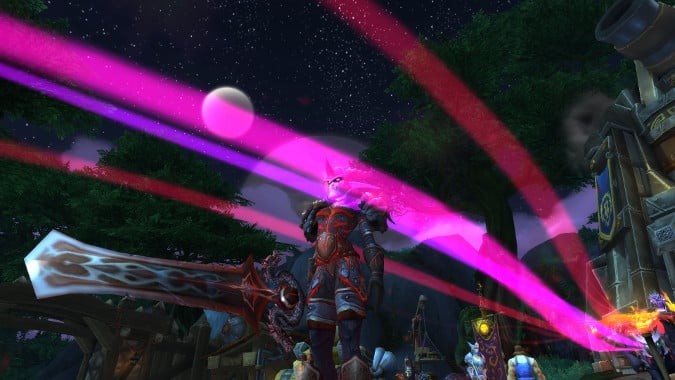 Yup. Won’t be coming back here once the Invasion starts. In a way I’ll miss it, but in another way I really, really won’t.

This is the Queue. We talk about Blizzard games. There will be spoilers for the novel Wolfheart in this Queue, but come on, it’s been out for years. If you really cared you would have read it by now.

Q4TQ: How weird will it feel to start farming the Black Temple for the Warglaives on a Demon Hunter?

Maybe almost as weird as raiding Orgrimmar felt on an Orc Warrior? Iunno. I have this whole thing in my head to explain why my Demon Hunter is there — essentially she jumped in a time portal to go back and warn Illidan about the adventurers only to discover that somehow, no one at the Temple recognizes her. They go hostile and attack her, and she has to fight her way up to Illidan only to have him attack her as well. Sorrowfully, she realizes the time paradox — if Illidan is never captured by the Warden, then she never ends up in the Vault, never fights her way free, and thus never gets to the time portal to go back in the first place. There were no adventurers. There was just her, all along. She betrayed Illidan and helped capture him.

Driven mad by this knowledge, she wipes it from her mind and tries again next week.

I really don’t get the love for Zangarmarsh. Perhaps it’s because I didn’t start playing until Wrath, but I never got the appeal of the zone. The quests are boring, the ambience is meh at best.

Howling Fjord and Grizzly Hills on the other hand, I love everything about those zones and can’t wait for Stormheim.

I hate Zangarmarsh. Hate hate hate it. Hate it for being weirdly blue everywhere you go. Hate it for its ridiculously spread out questing, which really really blew chunks after a similar problem in Hellfire Peninsula. Hate it for those annoying Naga with the Broken slaves who ran away and chained more Naga on you at the drop of a hat.

Hate it. I was so glad Draenor said the whole bloody place was under water. If I couldn’t I’d flood the one in Outland. Drown it forever. But part of me is afraid that would just make it like Vashj’ir and that would be the only way I’d hate it more than I already do.

But to be fair, my favorite zone in The Burning Crusade was Netherstorm. So maybe I’m just weird.

QftQ: not wow related, but D&D and MMO in general, where did the idea of a priest with a hammer or a mace came from? i saw this idea in many games, is it just fiction? is there a real stories in history about priests with maces?

If you look at the Bayeux Tapestry, created after the Norman Conquest of England in 1066, you’ll see Bishop Odo of Bayex using a mace like weapon as he fights along the Normans. (He was William the Conqueror’s half brother and essentially his right hand man for a time) — it was from this image and the proposal by later historians that Odo used a mace to avoid shedding blood or carrying implements of war that later the idea came that men who took Holy Orders could not use swords.

It’s debatable if this was actually the case — he was an ordained cleric, but also famous for his war prowess, so it’s likely that he used a mace because it was more effective against chain armor of the kind popular on the battlefields of the 11th Century, and not out of any religious motivation. (Armor like interlocking chain or the later plate was able to turn a blade but the raw force of a hammer impact could cause internal damage even if it didn’t penetrate the armor). The legend spread and other groups like the Hospitallers and the Templars used maces for similar reasons, helping to cement the popular idea of the holy warrior eschewing swords for religious reasons.

It all started with that tapestry, ultimately Medieval Europe’s best bit of propaganda, so effective that it spun off legends about almost everyone in it. Even Odo, Bishop of Bayeux and his mace.

QftQ: I haven’t read all the Warcraft novels, but I’d heard that in one of them, Maiev Shadowsong becomes a full-blown villain. But now in Legion, it seems like she back on our side, with no mention made of her former misdeeds. Am I misreading this situation? Did I miss something? Should I really just go read the novels I haven’t yet?

You’re not misremembering. So far in The Tomb of Sargeras and later in Legion there seems to be little if any mention of the events of the novel Wolfheart in which Maiev straight up plots to kill Malfurion Stormrage, does kill at least one Highborne mage, and leaves the Wardens in disarray when she runs away to plot from the shadows.

However, there is some dialog in a quest in Legion that I won’t spoil for you here that does, in fact, touch upon this. Apparently the Watchers on the Broken Isles either are out of communication with Darnassus or simply don’t care what Tyrande and Malfurion have to say (possibly because Tyrande killed a bunch of Wardens to let Illidan out of his eternal jail) — again, without spoilers, let’s just say you help bring about a reunion between Maiev and someone from her past that sheds a new light on the events of Wolfheart.

So just hold on for a little while longer and then you’ll get to see it for yourself. It doesn’t answer everything, but it doesn’t ignore it, either.

Do I need to buy Legion to experience all the pre-expansion invasion stuff (not being able to create DHs because I’m sure that isn’t allowed) that is coming soon? I don’t want to buy Legion yet with school starting up again, but will try to play a little with the invasion quests and what not.

Nope. The Invasion and the Broken Shore will be accessible to you. You’ll not be able to make a Demon Hunter, just as you surmised, but the rest of it you should be able to take part in.

Okay, that’s the Queue for tonight. 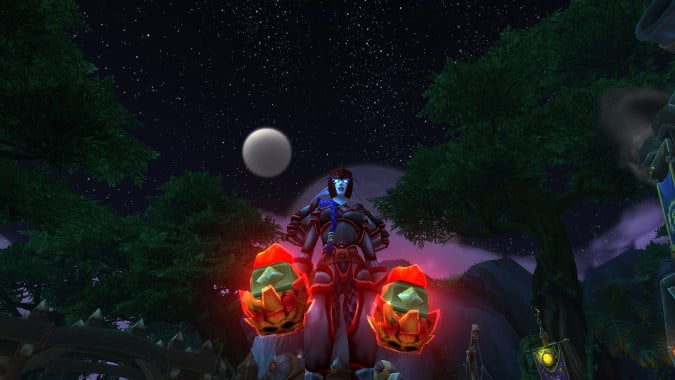 I’m ready to go hit demons in the face. Make sure you ask Alex all sorts of questions and maybe I’ll see you out there during the Invasion.

Blizzard Watch is made possible by people like you.
Please consider supporting our Patreon!
Filed Under: Clerics, D&D, Legion, Maces
Advertisement