Every card from Hearthstone’s One Night in Karazhan 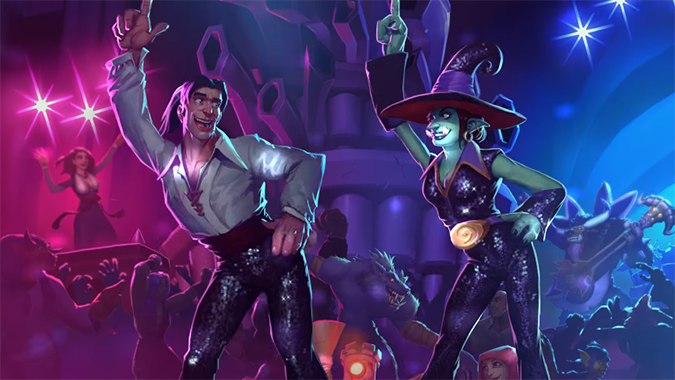 Hearthstone’s latest adventure, One Night in Karazhan, will be arriving in game on August 11. As usual, we’ll get one wing of the game at a time — after the first launches, we’ll get a new wing every week. There are four wings in total (plus a free prologue mission) featuring 13 bosses and 45 new cards. You can buy the entire adventure for $19.99 USD via the in-game shop or pick up the wings individually for $6.99 / 700 gold each.

But you’re interested in the cards, right? Us too. Let’s dig into every new card in One Night in Karazhan below.

But before we start, with a new adventure comes a new game board! 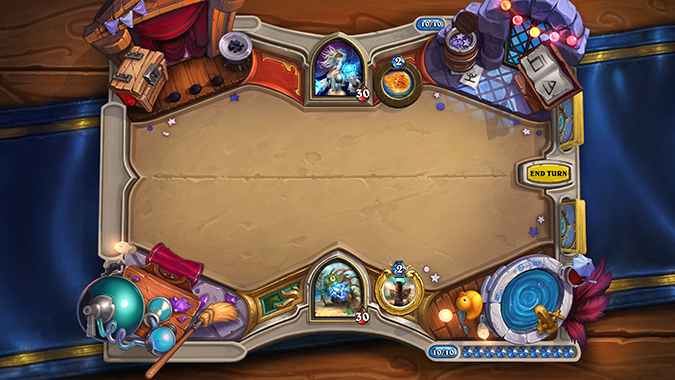 On to the cards 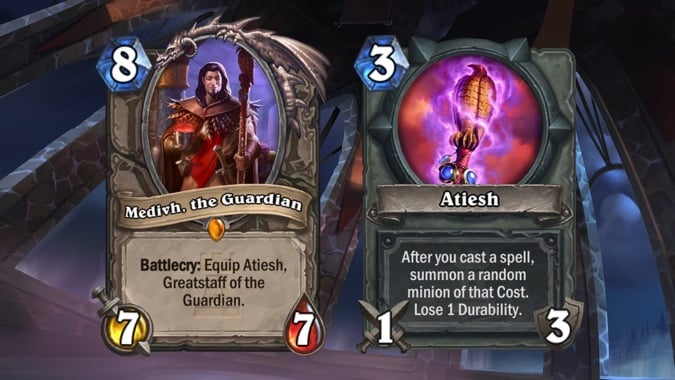 Menagerie Warden (Druid): This is going right into Beast druid Decks for sure. Imagine playing Druid of the Claw on turn 5 and following it up with the Warden on turn 6.

Runic Egg (Neutral): Could be a staple minion for decks with multiple activators. The new Nerubian Egg? Except it doesn’t have the body.

Arcanosmith (Neutral): Good stall card as you enter the midgame. Not sure if it’ll be enough to help you win though.

Moat Lurker (Neutral): This card has the chance of making the greatest impact in a match.

Ironforge Portal (Warrior): This is the Warrior’s portal card.

Spirit Claws (Shaman): The weapon gets an extra 2 attack if you have a spellpower boost. Play it on turn 1 and on turn 2 hope for your 25% chance to Shaman Hero power into a Wrath of Air totem.

Avian Watcher (Neutral): Seems like a greater emphasis has been placed on Secret cards for this adventure.

Wicked Witchdoctor (Shaman): Too bad it’s a basic totem. I would’ve enjoyed watching the reaction from the community if you had a chance of pulling a Totem Golem from playing a spell.

Silvermoon Portal (Paladin): This is the Paladin portal card.

Arcane Giant (Neutral): Might fit in Tempo Mage as a late game threat.

Swashburglar (Rogue): This is where that Ethereal Peddler synergy comes into play.

Deadly Fork (Rogue): Warlocks aren’t the only classes with silverware cards. Once the fork is destroyed, it comes back as a weapon. Talk about your reusable utensils.

Priest of the Feast (Priest): The Priest version of Water Elemental, Priest of the Feast can end up being a real pain if it sticks around. With 6 health, it’ll be tough to remove at that stage of the game. Priests can Hero Power to help keep it alive and add longevity as well.

Purify (Priest): At the very least, you can cycle for a card. At most, you can cancel out minions which affect you negatively. You can pair it with the Moat Lurker to just outright remove an opposing minion with no chance to bring it back.

Onyx Bishop (Priest): Here’s a neat 5 drop for Priests. Imagine getting an Injured Blademaster resurrected from it.

Nightbane Templar (Paladin): Dragon Paladin players get a new lease on life with extra cards that can be added. Is it enough to make it competitive between the Templar and Book Wyrm?

Medivh’s Valet (Mage): I don’t know about this card yet. Mage Secrets are 3 mana so you can’t exactly play it on curve. You’d have to hold it for turn 5 where you play a Secret card and the Valet for optimum value.

Arcane Anomaly (Neutral): The opposite of Mana Wyrm, the Anomaly has the opportunity to stick around longer than it should.

Cat Trick (Hunter): A new Secret card for Hunters that grants you a 4/2 Beast with stealth which is a follow up to the Bear Trap we received from League of Explorers.

Cloaked Huntress (Hunter): Secret Hunter?! Wow. The tempo gains from this card, especially if you can draw and hit your secrets, would be insane!

Moonglade Portal (Druid): One of the new portal cards added to the game for Druid players which can provide you with a much needed heal and an appetizing 6 mana minion (such as Cairne or Sylvanas).

Fool’s Bane (Warrior): Here’s a new Warrior weapon which can help control and contest your opponent’s board presence. Too bad you can’t hit the opposing hero with it.

Netherspite Historian (Neutral): Plays well with Dragon decks but the historian does not count as a dragon itself.

Medivh (Neutral): The next legendary card of the set is none other than Medivh himself in his prime. He comes equipped with his own staff, Atiesh. Speaking of, this neutral weapon grants the player the ability to summon a random minion into play based on the mana cost of your next spell. You get three charges, so make them count!

Silverware Golem (Warlock): Making use of more discard mechanics, Silverware Golem has a chance of coming into play if you are placed in a position to discard it (from effects like Soul Fire or Doomguard). Otherwise, it’s just your run of the mill 3/3.

Zoobot (Neutral): This Mech provides a buff to a friendly Beast, Dragon, or Murloc! If you can time and play a Dragon and a Beast on turns 1 and 2 (and if they happen to survive), playing Zoobot on 3 will provide you with a nice tempo advantage. Neat card!

Pompous Thespian (Neutral): A 2 mana neutral for a 3/2 with Taunt. Seems rather vanilla and lackluster. Then again, not every card in an adventure can be overpowered or amazing.

Kara Khazam! (Warlock): I suppose this is the Warlock version of Call of the Wild — Except without a charge, taunt, or a buff minion.

Prince Malchezaar (Neutral): At first glance, this card looks amazing. 5 random legendary cards immediately get shuffled into your deck at the start of the game. In practice though, Elise has taught us that some of those legendary cards can be outright useless for us. Note that Malchezaar obeys deckbuilding rules as he will not grant you a second copy of a legendary in your deck and the legendary must either be neutral or your class. 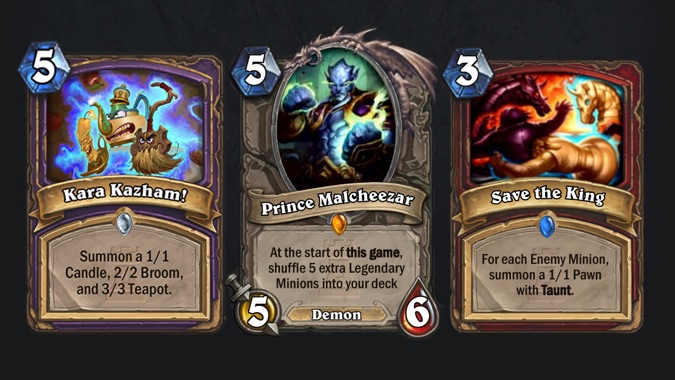 Protect the King (Warrior): This card is essentially Unleash the Hounds for Warriors except the 1/1s all have Taunt instead of Charge.

Moroes (Neutral): I’m a little underwhelmed by this card due to the plethora of tools available in the game to get rid of it. Almost any AOE spell (like Consecration, Swipe, Arcane Explosion, etc) can bypass the stealth mechanic to remove it from play. I can see a token Druid deck of sorts slotting this in to complement Violet Teachers, but it just looks too fragile even with the stealth protecting it.

Book Wyrm (Neutral): Hey! A dragon in Karazhan! The Book Wyrm is a more expensive (but more potent) version of a Stampeding Kodo. The dragon type fits in nicely with The Curator if it weren’t for the fact that you still need a dragon in your hand as an activator. Dragon Paladin fans might want to give this guy a go. The 3/6 body isn’t bad either.

Malchezaar’s Imp (Warlock): There’s a possibility here of a new Warlock archetype featuring a discard mechanic, but unfortunately, Hearthstone doesn’t offer much in the ways of interacting with discarded cards. Still, drawing two cards off a Doomguard’s pretty awesome!

Babbling Book (Mage): I can already see this as a new upcoming Tavern Brawl. Aside from that, it’s a decent early drop minion and an alternative to Mana Wyrms. Casino Mage is looking good!

Firelands Portal (Mage): I’m not sold on this card yet. As a Mage, I’d rather have a Flamestrike handy just in case. Running Flamestrikes and Firelands Portal just seems like a risky proposition since it’ll bring up the average curve of your deck. On the other hand, you might end up with cards like Stranglethorn Tiger, an Earth Elemental, or a Nexus-Champion Saraad.

Kindly Grandmother (Hunter): This is the new Hunter 2-drop card for sure! Ever since Haunted Creeper disappeared, a new Deathrattle minion was desperately sought after. Right now, most Hunters use a Huge Toad in the 2 mana slot, but with both Kindly Grandmother and the Big Bad Wolf being beasts, the synergy with Houndmasters works brilliantly.

Ethereal Peddler (Rogue): I’m not as familiar playing a Rogue, but this Peddler might be able to help spawn a new Rogue deck type especially when combined with cards like Burgle.

Barnes (Neutral): At first glance, Barnes may not seem like much, but I can picture him slotting into Hunter decks (I mean, Infested Wolf? Savannah Highmane? Tundra Rhino?!). The trick with Barnes is you want minions with a Deathrattle or some kind of effect where a 1/1 version of that minion isn’t bad (Sylvanas?!).

The Curator (Neutral): This is an amazing legendary for a neutral. It helps refill your hand in the late stages of the match. A Stampeding Kodo, Corrupted Seer, and Azure Drake (or Ysera, if you have one) are prime choices to be fetched up by The Curator for any class.

Ivory Knight (Paladin): At the 6 mana slot, you get to discover a spell. Oh, and the knight happens to be on a 4/4 body. The unfortunate issue with Paladin is that there’s a large number of secrets that they have to wade through in order to pull out solid Paladin spells like Consecration or Avenging Wrath.

Enchanted Raven (Druid): How innocuous! This card will squeeze into Beast Druid decks easily. Turn 1 Enchanted Raven followed by a Turn 2 Mark of the Wild nets you a 4/4 minion with taunt. Ouch.

And that’s all for One Night in Karazhan! Get your new deck ideas in order, because this adventure is coming out soon.

Blizzard Watch is made possible by people like you.
Please consider supporting our Patreon!
Filed Under: Barnes, Curator, Hearthstone-adventure, One Night In Karazhan
Advertisement