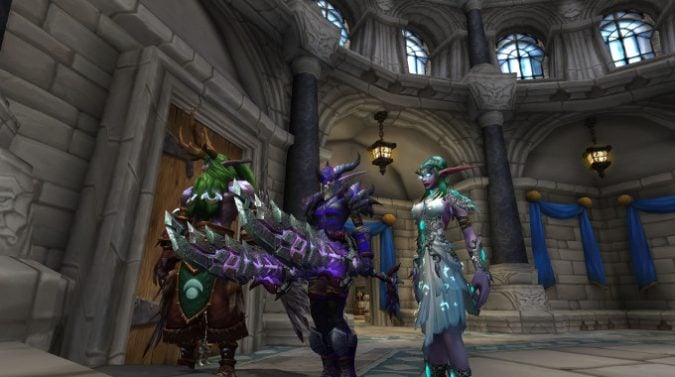 So I recently leveled my 10th level 100 thanks to invasions (five Warriors – Human, Worgen, two Draenei and a Night Elf plus two Demon Hunters, a Hunter, a Shaman and a Paladin) and when I got the most recent Warrior to Stormwind I found myself constructing a story for her in my head. She’s a Night Elf, a traditionalist who thinks a man’s place is sleeping in a barrow den somewhere talking to trees. She absolutely thinks she should be running the whole war against the Legion and she’s not very deferential to her people’s ‘leaders’ at all.

So during the scene in the throne room she was pretty much all you know, Jaina’s got a lot of good arguments. If Jaina starts her own faction, I think she’d be down for a gig as Jaina’s new Night Elf bodyguard.

Yeah, it didn’t work out great for the last one, but that sort of proves her point.

The entire reason I leveled a Night Elf was to do Azsuna and Val’Sharah. I’m absolutely doing both those zones ASAP.

Qs4tQ: Aside from the scenario (I can’t believe there’ s only one!), is there anything else, like phasing, that prevents a level 110 with more time than his friends to level up from joining a friend still leveling months later on their journey and just speeding things up amidst the ever-scaling broken isles?  Furthermore, if said level 110 friend indeed has that time and desire to help (not powerlevel, just “help”) a lower level friend… aside from dungeons, how would they best do that?  Are there still static “bonus objectives” on the map for the leveling player?  Are they good XP?  One of the most attractive things about a scaling gameworld is this “level gap bridging” for friends with divergent availability to play, my core question I’m getting at here is: how is this best capitalized on

There are some bonus objectives which your friend will be able to complete and you at 110 may not, if you’ve already done them. (Some of them repeat, like Draenor Apexis ones, and some of them don’t.)

There is phasing to a degree — using Stormheim as an example, there are various story quests that trigger phasing at times.

Honestly, though, with scaling you should absolutely be able to run dunegons and do most stuff in a zone together even if you’re 110 and they’re 102. As for how to do it best, I’m honestly not sure if Dungeons are still the fastest way to go. I seemed to level fairly quickly just by doing the quests in a zone. I hit 110 without even finishing all four of the scaling zones (I didn’t do Stormheim on that character) and went straight for Suramar.

My advice is to try questing and dungeons until you get a feel for what’s most rewarding for you. Your friend may find it better to just chain run dungeons, or maybe will enjoy simply seeing the world.

Is there a quick summary of the zones?? To help some of use decide….asking for a friend

Here are my extremely quick and dirty summaries of each zone:

Azsuna — The Legion is invading in force, and there are ancient Night Elf ruins with a terrible secret connected to Queen Azshara and the Pillars of Creation.

Val’Sharah — This ancient bastion of the oldest Druids on Azeroth is imperiled by both the Legion and the Emerald Nightmare working together… or are they?

Highmountain — The Droghbar have seized one of the Pillars (the Hammer of Khaz’goroth) and seek to use its might not only against the Legion, but their one-time allies the Highmountain Tauren.

Stormheim – Genn and Sylvanas really hate each other. A lot. A real lot. Sylvanas has a plan. Genn wants to foil it on principle. And there are fel-cursed Vrykul racing you to the Aegis of Aggramar.

Q4tQ: Will Legion “force us” to play our alts more (and earlier) that usual? In Warlords I could park my low-level alts in the Garrison and they could do stuff there without much time invested. Legion will force me to quest with alts to get resources. There is no passive way to get resources, and no way to progress Artifact Knowledge (the catch-up mechanism) without resources. They can’t even do follower missions without farming resources. Am I needlessly worried about getting resources for my alts?

Well, you put force in quotes, so I assume you already know that no one is actually forcing you to do anything. Therefore, I’ll go straight to saying that yes, Legion is a lot less passive than Warlords. You will actually have to play your alts to get them Class Order Hall Resources. There are a wide variety of ways to do that, but the days of parking an army of alts at the Garrison and logging on once a day to queue up a host of missions for each of them are a thing of the past.

Frankly I think it’s a positive step for the game. The automatic, almost metronomic quality of log on, queue missions, switch toon, queue missions quickly became so mind numbing and tedious that many, many players simply gave up entirely. Having to actually interact with the world and your fellow players is a big part of an MMO, and Legion feels to me like a significant and necessary course correction from the automation of Warlords.

Question for those on beta:  I have 3 pallys one tank specced, the other two ret specced.  If I just set my loot preference to holy for one of them but continue to use ret.  Will I get the holy artifact without being a holy paladin or do I need to be holy to have it be my initial artifact on that character?

You have to choose which Artifact you want to get first in a quest near the start of the expansion. When you do this, you will automatically switched to the spec that Artifact is for, and you cannot equip an Artifact unless you are specced properly. So even if you have the Silver Hand, you can’t equip it when you are Ret, and you can only get the other two artifacts after you’ve completed the quest to get your first Artifact. Your loot specialization choice doesn’t enter into it.

Damn It!  I had a question and I can’t remember what it was

No worries, you can always ask it later.

With the four leveling zones in Legion, are any different from a horde/alliance perspective? Or are they all neutral zones?

Azsuna, Val’Sharah and Highmountain are more or less the same, save for a few minor differences. But Stormheim is divided into an intro scenario and then the first third of the zone’s quests are very different depending on your faction.

How do melee handle the short new camera range? I was thinking of making my Demon Hunter my main, but then when fighting Kazz I had to keep looking up at his crotch to make sure I was behind him…not pleasant. I’ve always been range dps so when it comes to handling visual clutter and over sized enemies I feel a bit lost.

This is the biggest reason that it’s an awful decision on Blizzard’s part to limit how far we can zoom out. They’ve created giant bosses so huge that if we can’t zoom out, we end up not only staring at monster butt all day (seriously, all these Pit Lords, I’m done demon keister.

It’s harder than ever to see various stuff on the ground in time to move out of it, run away from various spells, look out for walls of lava etc. Blizzard needs to rethink this change.

My only advice for how to deal with it as it stands is zoom out as far as you can, stand as far away from the boss as you can and still hit it, and curse a lot.

And that’s the Queue for today. A brief celebratory moment for me — I finished the first draft of the sequel to Nameless this week despite having more health troubles in our family than I really like to talk about. So yay me.

I’ll see you guys next Tuesday. Make sure to ask Anne plenty of questions for the weekend.