Legion introduced a vast change in the leveling experience. Instead of being ushered through zones story by story, players can pick and choose their path. Since all four leveling zones scale to whatever level you happen to be, it doesn’t matter where you decide to go first.

It’s a great change, and Legion is probably the most free-form expansion we’ve had in terms of questing. Yet that overarching story is still there, tailored to each character individually. Through quests and Class Halls, it’s made clear that you are one of the most important figures on Azeroth… but what about everyone else that’s wandering around?

Artifacts have been presented as the most powerful weapons any hero on Azeroth could ever wield. You can customize the appearance or you can transmog the weapon if you want to. And you can obtain all Artifacts that are available for your class as long as you do the accompanying storyline.

This is great, but for roleplayers, it presents an interesting conundrum. If my character is carting around the Ashbringer, then what exactly is that sword that the guy across the room is carrying around? Out of all the Legion-related questions I’ve gotten, this has to be one of the most prevalent. How do you resolve the fact that there are so many of these Artifacts floating around?

Honestly, the easiest way to deal with it is just to simply ignore their existence. Artifacts have a story element to them, yes. But that doesn’t mean you need to acknowledge it in roleplaying situations. Since we’re dealing with the fact that everyone has one of these things, Artifacts are more like a game mechanic than a story.

Roleplayers have a unique new way to look at the world this expansion. Instead of being divided by faction, we’re divided by Class Halls. We aren’t grouped up with assorted members of our own faction; we’re grouped by the class we chose to play. How does this affect roleplaying in general?

Well, you’ve got an opportunity here and a different kind of roleplaying hub. Not everyone in your guild is going to be able to visit your Class Hall, unless you’re running a class-based guild. This means that there isn’t an obvious spot for guild meetings but it also means you can pick wherever you’d like to hold that guild meeting. Want to hit the old garrisons from Warlords? Go right ahead. Want something a little more public? Head to one of the major cities. The world is open for you and your guild, so take advantage of it!

But more importantly, you as a roleplayer have the chance to indulge in some class-themed roleplay. It doesn’t matter if the people you find aren’t in your guild – you already have a common bond to work with. And there’s a wealth of unguilded roleplayers collected in all those Class Halls. If anything, recruitment should be easier than ever – just strike up a conversation and take it from there.

Along with the Class Halls and Artifact weapons, players have been bestowed titles appropriate to their chosen class. This is in part because you’re presumably the new leader of your class. Some classes have more subtle titles, like Battlelord or Huntmaster, but others have considerably more lore significance, like Archmage, Archdruid, Farseer, or Highlord.

But once again, we run into the same situation that we’ve got with the Artifact weapons. Logistically, there can only be one leader of a class, just like there can only be one Ashbringer. And just how significant is that amazing Archmage title, if every mage out there has been bestowed with it? How many Farseers does the Earthen Ring need, anyway?

This is another case of looking at the situation as more of a game mechanic than something that’s applicable to your story. You don’t have to display that title you’ve been given – you can choose whatever title you like. On the other hand, you can look at it from the perspective that so many characters in your class have participated in so many battles, they’ve all earned that title. Or you can simply just ignore titles altogether in favor of the characters themselves. 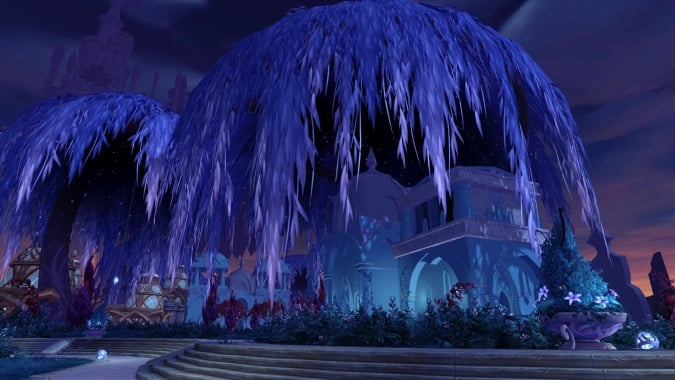 All of these are examples of what Blizzard does best – stories that are driven around your character, that make your character a vitally important part of the overall game narrative. For someone playing solo, or a player with no vested interest in roleplay, this feels great. For roleplayers that spend a lot of time interacting with others, it tends to create confusion.

If you’re a Highlord talking to another Highlord, who’s the real Highlord? If you and another player are carrying around the Scythe of Elune, who really has possession of it? What you need to remember here is that as a roleplayer, your character’s development doesn’t have to be defined by the game around them. You can make them anything you want them to be. And just because the game world insists that you’re the leader, it doesn’t mean you have to accept that.

How roleplayers look at the world

What I generally suggest for roleplayers is that they look at the game with two sets of eyes. There’s the presented narrative, which defines and shapes the lore moving forward. Then there’s the unspoken narrative – the one that you, as a roleplayer, write for yourself.

You don’t need to accept that presented narrative if it doesn’t fit in with the vision you have for your character. All you need to do is note what pieces of lore are important – which ones change the shape of the world, like the introduction of the Highmountain tribe, or the Nightfallen, or further explanation of just how the world fits together. Your character’s narrative should reflect that defined reality, but it doesn’t need to rely on it.

Don’t look at other roleplayers as wielders of mighty weapons, or lean on the use of titles in roleplay to define who those other characters are. As roleplayers, we have the creative control to choose our own destiny, as far as our characters are concerned. Whatever path your character happens to follow, it’s entirely up to you.