What is Azeroth? As we’ve learned so far in Legion, the planet itself is the home of a Titan world-soul – essentially, a baby Titan. Unfortunately, that world-soul hasn’t been left to grow in peace. Between the infestation of the Old Gods and multiple Legion attacks, Azeroth has always been in a state of constant peril.

It’s a peril reflected on the very surface of the world itself.

One of the questions we’ve been asked several times is about the origins of the various wells scattered across Azeroth’s surface. What’s the difference between them? Is there a difference?

The Well of Eternity

The first of these gigantic, mystical fonts of water was the Well of Eternity – and it’s not really water at all. When the Titans first came to Azeroth and discovered the Old Gods, they fought a great war against these malignant creatures of the Void. As the Titans were worried that their size would harm the world-soul if they traversed the surface, they created armies – the titan-forged – to fight in their stead.

But as the titan-forged made their way to the bastion of Y’Shaarj, the Titans worried that the armies wouldn’t be able to hold out against the Old God. With that in mind, Aman’Thul reached down through the skies of Azeroth and attempted to tear Y’Shaarj from the world’s surface. Although the Old God was ripped apart, the world-soul was wounded as a result. Horrified, the Titans realized that the Old Gods were burrowed too deeply into the world-soul to simply be removed.

So they let the titan-forged clean up the mess. Titan keepers worked nonstop to staunch the wound, crafting magical wards around it. The arcane lifeblood of Azeroth eventually settled into balance, and the keepers named it the Well of Eternity. After the Titans left Azeroth, the keepers continued to work with the Well.

Keeper Freya in particular decided to use the arcane lifeblood of the Titan to create new life. She created enclaves where the Well’s energies had coalesced – Sholazar Basin, Un’goro Crater, and the Vale of Eternal Blossoms. This included the Wild Gods – creatures that would also be called the Ancients, or the August Celestials, or the Loa.

The second Well of Eternity

The end of the War of the Ancients triggered the Sundering, an event that split the continents of Azeroth into the land masses we know today. It also destroyed the Well of Eternity – scattering Azeroth’s arcane lifeblood across the world. What remained was a tumultuous swirl of chaotic energies. The balance that the titan-forged had so carefully restored was thrown into disarray, and the Maelstrom was the result.

But before the Well of Eternity was destroyed, Illidan Stormrage saved several vials of water from it. He took three of these vials and poured them into a lake at the peak of Hyjal. This act created a new Well of Eternity – the second of its kind. Although powerful, it could be argued that it held less power than that of the original Well. It was a Well of Eternity, but it was diluted by Azeroth’s own water. The Aspects created the World Tree Nordrassil to keep the Well safe, and charged the Night Elves with keeping watch over the World Tree.

Nordrassil’s roots grew deep into the earth, spreading life-giving energy across the world in much the same way as the original Well of Eternity. At the end of the Third War, Nordrassil was heavily damaged when Archimonde was destroyed. But the Well remained, and over time, Nordrassil was renewed.

After the War of the Ancients, Azshara’s Highborne – or what remained of them – took shelter with the rest of the Night Elves. But they were forbidden from practicing any of the arcane magic that they once used so freely. The Highborne tried to convince the rest of the kaldorei of the power of arcane magic by unleashing a magical storm on Ashenvale. This plan completely backfired, and the Highborne were banished from Kalimdor.

They established themselves on the Eastern Kingdoms, eventually settling in an area they named Quel’Thalas. The leader of the former Highborne, Dath’Remar Sunstrider, had in his possession just one of Illidan’s vials from the original Well of Eternity. Taking his cue from Illidan, he poured it into a lake that sat at the convergence of powerful ley lines. The result was the Sunwell.

Again, it wasn’t quite as powerful as the original Well of Eternity. But it was more than enough to sustain the quel’dorei, suffusing them with its power every single day. They grew dependent on it, even if they didn’t realize just how deeply they were affected. When the Sunwell was destroyed during the Third War, the quel’dorei – now calling themselves sin’dorei, or Blood Elves, suffered as a result.

But the Sunwell wasn’t lost. After Kil’jaeden was defeated on Sunwell Plateau, the Prophet Velen, leader of the Draenei, arrived with the last spark of the naaru M’uru. M’uru’s heart was able to reignite the Sunwell, suffusing the Blood Elves with power once more – both arcane power, and the power of the Light.

Meanwhile in Pandaria, the Emperor Shaohao was crowned, and subsequently told of a prophecy that revealed the events of the War of the Ancients.  Fearful and forlorn for the fate of his people, he traveled to the peak of Mount Neverest, where he spoke to the Jade Serpent and asked for advice. The Jade Serpent advised Shaohao to divest himself of his burdens, purify his spirit and become one with the land.

Through a series of trials, Shaohao did just that, defeating each of the Sha in turn. He established the Shado-Pan to watch and protect against any further Sha threat, and told his people to continue living each day to the fullest, and sleep each night with an unburdened peace of mind. And then he traveled to the Terrace of Eternal Spring and ascended, shrouding Pandaria in a dense, protective mist. When the world was Sundered, Pandaria quietly drifted into the ocean, its waters intact.

This means that the waters of the Vale of Eternal Blossoms are one of the closest things we have to that original Well of Eternity. They were corrupted when Garrosh Hellscream drenched the heart of Y’Shaarj in the sacred waters. But we purified them anew in the Siege of Orgrimmar – we defeated Immerseus. Although, as Lorewalker Cho stated, it will take much time for the Vale to heal, our efforts possibly preserved that remnant of the Well of Eternity and gave Pandaria new hope for survival. 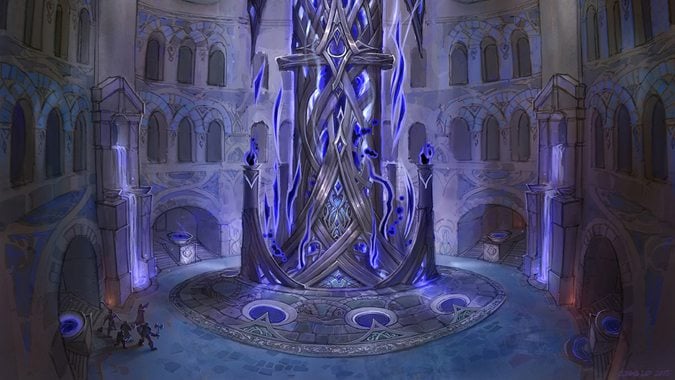 And then we have the Nightwell, a beast of an entirely different color. Before the Sundering, Grand Magistrix Elisande ruled a small sect of Highborne sorcerers in Suramar. Although they were originally fiercely loyal to Queen Azshara, Azshara’s dealings with the Burning Legion were a source of great concern. When Elisande discovered the Legion were planning to create a second portal in Suramar’s Temple of Elune, she decided enough was enough.

Using the Pillars of Creation, Elisande and her followers sealed the portal with a set of unbreakable magical seals. But they didn’t join the kaldorei that were fighting against Azshara and the Legion. Instead, they sealed themselves away behind a magical shield. It preserved the city through the Sundering, and allowed those within to survive. It also preserved part of the original Well of Eternity.

Left to their own devices, the Highborne realized they would starve beneath that protective shield once they ran out of food. And so Elisande used one of the Pillars of Creation – the Eye of Aman’Thul – to create the Nightwell. This super-charged conduit of magical energy became the sole source of sustenance to the former Highborne, now called Nightborne.

Unlike the other wells scattered across Azeroth, it’s entirely possible the Nightwell is more powerful than even the original Well of Eternity. It’s not just concentrated life blood from Azeroth’s world-soul. It’s been infused with the powers of a Pillar of Creation on top of that. Needless to say, the evolution and transformation of the Nightborne, as well as their dependence on the Nightwell, are both tied to the evolution of the Nightwell. 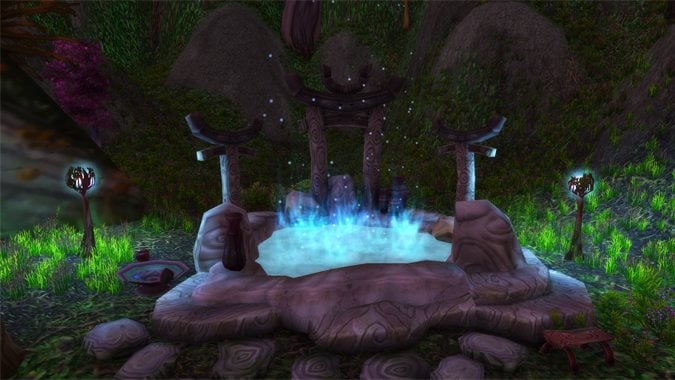 Obviously there are other wells on Azeroth, though none carry quite the importance of those listed above. The Night Elves have moonwells scattered all over the various continents. These wells are supposedly repositories for the waters of the Well of Eternity. But given how far these wells are scattered across Azeroth, it’s likely these were created from the waters of the second Well of Eternity, not the original source.

As for the original Well of Eternity, it’s still there, to a degree. The turbulent waters of the Maelstrom are an eternal vortex of swirling energies. Keep in mind that the titan-forged set out to originally calm and balance the wound left by Aman’Thul. It’s likely that the Sundering shattered the magic wards set around the wound, and what we’re seeing in the Maelstrom is what that wound was like when it was freshly created.

Although the origins of the various wells are all tied to the moment Aman’Thul tried to violently wrench Y’Shaarj from the ground, today they’re a continued source of life. It could be argued that none of the world’s varied and decidedly unique life forms would have ever evolved without the Well of Eternity and its various evolutions. And maybe that’s the thing that sets us apart from the rest of the universe. While other worlds and life may have been shaped and influenced by the Titans, we may be the only ones directly shaped and formed by the arcane life-blood of a uniquely powerful world-soul: Azeroth.