Know Your Lore: What we don’t know yet about Legion

We’re well into patch 7.1 and 7.1.5 will be coming soon, along with the Nighthold raid which will reveal the final fate of Illidan Stormrage. As of right now, though, all we have is a cinematic that is chock full of spoilers to go on and no idea what happens after that. I’m not going to discuss that cinematic here — it’s not necessary, because today’s KYL is about what we don’t yet know about the events leading up to Legion, and what comes next.

There’s a lot to talk about. For example, we know that Turalyon is alive, and commanding the Army of Light. But how did he get there? 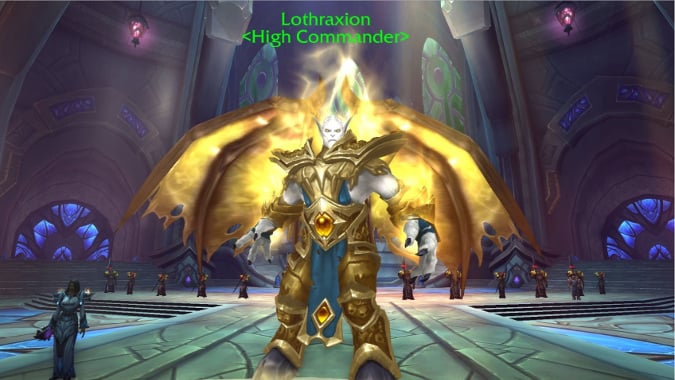 The Army of Light

What little we heard about Turalyon and Alleria in The Burning Crusade (besides the existence of their son Arator, who plays a role in the Paladin order hall campaign) didn’t cast much light on the truth of their disappearances. And what we discover in Legion doesn’t fill in many gaps either. We know that according to a message Turalyon (now High Exarch Turalyon of the Army of Light) sends to Arator, it has been “ages” since he and Alleria left Outland. Now, keep in mind that the end of the Alliance Expedition to Draenor, where Khadgar closed the Dark Portal, was almost twenty five years ago. That’s a long time, but it’s not “ages” — but what Turalyon exactly meant in that statement is as yet unknown. He could have been speaking metaphorically (after all, if he’s spent the past two decades battling the Burning Legion it probably felt like ages) or time may have passed at a different rate for him and Alleria than it did for us, due to his having jumped through a portal at the end of Beyond the Dark Portal.

It was hinted in Burning Crusade that Turalyon and Alleria returned to Outland along with Khadgar and the others and only vanished three years later. If so, how? Were they captured by the Legion at some point? That’s possible, since Alleria’s bow Thas’dorah was recovered from a Legion portal world named Niskara by her sister Vereesa and the appointed leader of the Unseen Path. If so, how did they escape? The Army of Light is said by X’era to be fighting on Argus. How did Turalyon and Alleria get there?

These and more questions wait to be answered. Will we finally see Turalyon (not merely a image of him) in-game? What of Alleria? Will we see any of her? What exactly are they doing on Argus and how will it defeat the Legion? All unanswered at this time, but with the idea that we’re going to Argus in patch 7.3, perhaps not unanswered for much longer.

The Destiny of Illidan Stormrage

We’ve actually seen quite a bit of Illidan in this expansion. Some players have reacted negatively to the way the Naaru prime X’era has spoken about the sinister Stormrage twin and his grand destiny, but one thing is clear — we don’t actually know what that destiny is. Nor do we really know what Illidan’s plan for the Sargerite Keystone actually was. We know he wanted it. We know it allows for unrestricted travel through the Legion’s portal network. We know it’s a fel corrupted piece of Titan technology, which implies that the Legion’s portal network is likewise Titan tech.

But why did Illidan want it? Several theories come to mind — perhaps he intends to use it on Argus to hijack the entire portal network and effectively strand the Legion in the Twisting Nether, unable to travel between worlds. Perhaps he wishes to use it to lead a counter-invasion, bringing as much force to bear as possible (imagine his original order of Illidari, skilled slayers of demons) to slay the heads of the Legion. Or perhaps there’s some other use for Argus that we don’t understand — it was the world where Velen first contacted the Naaru, after all, and where he found the Ata’mal Crystal. We know that there were many previous ages of Eredar history before the coming of Sargeras and the flight of the Draenei, and perhaps it was there that Illidan sought salvation from the Legion.

But we absolutely do not know yet what his purpose was. We know the broad strokes — get the Keystone, stop the Legion — but not how he planned to bring it all together.

The Machinations of the Old Gods

Granted, the Old Gods are, well, almost made of insanity. The idea that anything they do would ever make sense or be readily understandable is probably naive at best. But we come to Legion with a realization that all we’ve seen and done when it comes to fighting the Old Gods might well have been utterly for naught — that not only did we likely just wake N’Zoth up by cleansing the Emerald Nightmare, but meanwhile both C’thun and Yogg-Saron barely even noticed their defeats in Ahn Qiraj and Ulduar. And now, with the Legion in full scale invasion of the planet… we still have no idea what the Old Gods are actually doing.

Fighting Il’gynoth just raised further questions, as this monstrosity of pure corruption whispered many things, some or all of which might actually be true, or none of them. The Legion was founded on the idea that destroying all worlds would allow the universe to be free from the taint of the Old Gods and their Void Lord masters. But the Emerald Nightmare as we experience it in the game is clearly one that touches upon both the Old Gods and the Legion. Xavius, the Nightmare Lord and seeming servant of N’Zoth, was made a satyr by Sargeras himself. Furthermore, it was when we defeated Archimonde atop Hellfire Citadel that we found the fragment of the Rift of Aln on his body, implying that Archimonde was somehow in contact with the Nightmare in some fashion.

What does this mean? Are the Old Gods actually working with the Legion? It seems almost impossible, given the cross purposes the Legion and the Old Gods usually work towards. But we simply don’t know, and we won’t until we know more about their motives.