The Queue: Now and forever 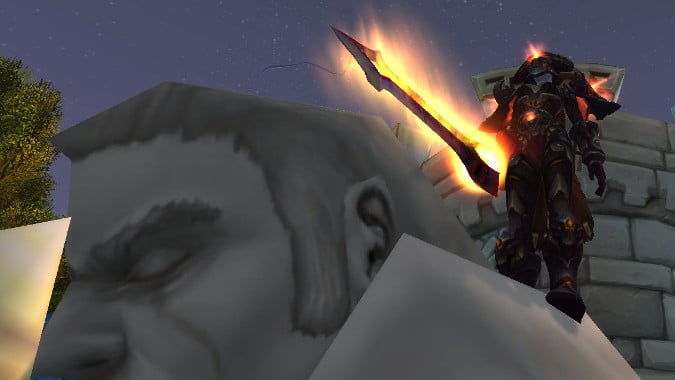 Hey guys. Listening to Outro by M83, writing the Queue. How are you all doing?

Let’s get this party started.

Nothing is squishier for soloing that enhancement and elemental shaman. Even as a class with self-healing they are by far the squishiest classes to play. All 3 of my clothies, my mage included, feel much sturdier and were easier to level than either shaman dps spec.

I really feel like there’s a change to Enhancement that I’m not getting, because I felt this way too, but I see a lot of Enhancement Shaman who tell me it’s fine so I’m not sure if the problem is real or if it’s just in my head. I was having an absolutely awful time leveling my Enh. Shaman, I finally gave up and played my DK instead. So far the easiest leveling I had was on an Arms Warrior — Second Wind and Victory Rush are just beautiful for leveling and soloing.

My Pally feels a bit squishier than the Warrior did, but tolerable. Certainly better than the Shaman did. Again, I’m willing t0 believe there’s a key factor of the class that I’m missing that causes this problem, but until I figure out what it is Enhancement is definitely a spec I’m not wanting to try again.

Comment for Rossi: This weekend I completed my final order hall campaign for my goblins (all 8 classes they can be) by rounding out with warrior (initially deterred by the extra length the campaign had). I have to say the Ulduar bit is brutal. I did it as fury and I don’t think I was ever above 30% health the whole time. Constant pulls of adds after adds with no way to interrupt them all or really heal, I died twice. Now of the other 7 campaigns I’ve done none was as brutal as that. I even went and geared up my arms weapon a bit to finish the campaign as arms. Why the hell is the warrior quest so damn painful to do?

Just last week I said I don’t like to use the same person twice in a single Queue. Now I’ve done it in back to back Queues.

Anyway, if you think it’s bad now (and it is) you should have seen how brutal it was on launch. I had to break out every trick in the book to get through that scenario. The fact that you got through it as Fury is a huge improvement — I had to go Prot (Prot!) to survive when I did it, even Arms with Second Wind and Victory Rush was too squishy for that place. Constant adds, many very powerful ranged elites, it was a freaking nightmare. They actually toned it down some (I’ve gone through it three times) and man, let me tell you, it’s still not a lot of fun on any Warrior spec. The fact that you stayed Fury for it is commendable.

So far the DK campaign hasn’t even come close.

I don’t know if only ret has this problem. When I was doing the FROST DK artifact at lvl 100, I could barely pass each fight and I fall to less than 20% health. Because I forgot food, I had to wait after each fight! By the way, I was outfitted with full ilvl 700 invasion gear with the exception of a wotlk trinket (I haven’t played my DK for a long time).

On the other hand, I easily completed my ret paladin leveling process although I did have more experience on ret and also my gear was pretty good.

I did the entire Frost Artifact quest as Blood. Blew through it with contemptuous ease. Truth be told, I also did the Unholy Artifact quest as Blood, same result. I’m told Unholy is actually pretty strong right now, but I haven’t switched out of Blood spec this expansion and I’m pretty happy with it overall. I did Frost on the alpha/beta and while it’s got a lot of fun moving parts it definitely feels utterly squishy compared to Blood (a tank spec, so I suppose it should) and I’m just more comfortable with Marrowrend stacking up Bone Shield while I Death Strike myself back up to full health any time I get low.

I definitely feel like even my Ret Paladin is a bit squishier than I like this expansion. It feels like melee DPS takes a lot more damage than I’m used to overall — Frost DK, Fury Warrior, Ret Paladin, Enh Shaman all felt like they were dying quite a lot if any adds showed up. At least Ret and Enh have some heals they can throw around and Frost DK could take a talent that helped a bit. Again, YMMV — a lot of players even here in the comments seem to be doing fine on some or all of these specs. I even play as Fury a lot more nowadays.

Any guesses on Overwatch xmass skins everyone? I’m so excited I can’t wait!
I’m going to guess that Tracer gets a reindeer skin, torb is santa, Winston maybe a yeti, and with luck McCree is only wearing a bow…okay that last one prob won’t happen T_T

Torb as Santa feels too ‘on the nose’ for me, but it wouldn’t be hard.

I’d kind of like a Festive Genji skin, swapping out his usual color palette for red and green neon lights. Mei could easily go full red fur, similar to what the Jolly one traditionally wears. Roadhog and Junkrat could go full Misfit Toys and that would be pretty cool. And Winston could wear a Santa Hat and carry a sack of toys around. (I feel like he might well honestly do this in the setting, showing up at hospitals and giving kids toys.)

Oh, and Soldier:76 wears a beard over his facemask.

I was running a dungeon on my outlaw rogue. On a fight, I reset the dps meter. I started off with Marked for Death, rolled the bones, got two buffs (crit and extra combo point), popped all my cooldowns, never missed a global cool down during that first buff, throughout the fight I never missed a chance to attack, when the boss moved I hit pistol shot and got off a blunderbuss. That was about as perfect a rotation as I could do.

At the end of the fight I looked at the dps meter. I was 5th. I was only slightly behind the healer. So…I’m not leet? I could blame gear or lag or hacks by the others, but a dps should never be below a healer. I’m going to go back to tanking where low dps is ok.

With scaling and the gear available from WQ’s you can end up with some weird results on meters. What level were you compared to the rest of the group, and what was your gear like compared to them? I’ve gone in as a tank at level 110 and had a group of mostly 102/103 players who I utterly dominated on DPS, and I’ve gone in at 110 as a Fury Warrior and gotten destroyed by people with 20 or more ilevels (or a legendary or two) who just pump it out. It can be hard to tell if it’s you or them, in other words.

I’m not saying it’s that easy in your case because I honestly don’t know, but make sure you’re not giving up too soon.

Q4tQ: Is anyone making comic-books IN the world of Warcraft? Like, with each expansion launch. I imagine a group of adventurers who retired, and started cataloging their place in the previous contents adventures. Did the ‘adventurers’ who conquered the deadmines have their stories published in universe? Are children in Stormwind reading up on the ‘mysteries of duskwood’. When they should be studying the first orcish invasion?

I spent five minutes writing this long paragraph about the history of comic books and comic strips and illustrated storytelling from the Bayeux Tapestry to cave paintings and heiroglyphs on tomb walls when it occurred to me that Azeroth is a fantasy setting and they could have all sorts of things we didn’t.

So sure, if it’s fun for you to imagine Azerothian kids reading comic books about heroes, go for it. Maybe all the stuff we’ve done in WoW has in fact been a series of comic books published by the Azerothian equivalent of DC or Marvel and the real world is a lot less crazy.

Okay, that’s the Queue for today. Tomorrow Alex is back up, so I guess talk more about elevators? I’m not really sure what all that was about.

Blizzard Watch is made possible by people like you.
Please consider supporting our Patreon!
Filed Under: DK, Paladin, Shaman, Squishy, Warrior
Advertisement