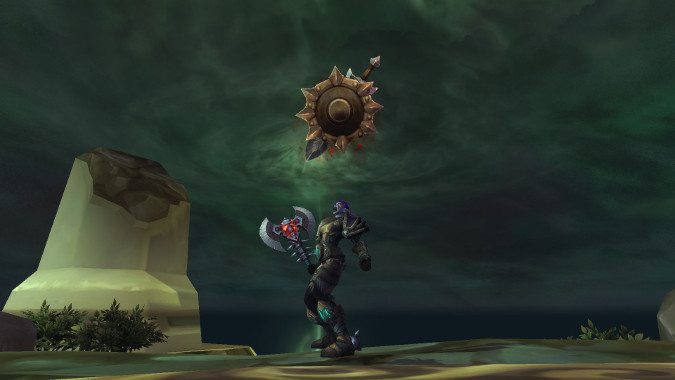 For whatever reason, whenever I read the words ‘Krasus’ Landing’ my brain immediately conjures up a ‘Dawson’s Creek’ style show set in Dalaran. I guess Season One would have been set in Wrath and been a very sturm und drang story about the forbidden love between Alliance and Horde mages, which of course only got harder when Cataclysm came out and the two factions got really hostile, and they finally broke up for good in Mists. A lot of people thought the show had jumped the shark in Warlords because it was suddenly all about these Orcs and Draenei, but Legion brought a lot of viewers back when the original characters returned, now bitter enemies but still there’s sort of a simmering attraction between them.

Oh, right, the Queue. Fine, we can talk about other stuff.

Q4tQ: Do you think the portal in the Tomb of Sargeras connected to Argus… ie the reason we go there in 7.3?

Based on Illidan’s whole Sargerite Keystone deal plus some things that happen in the Warlock Artifact quests with Gul’dan, I’d say yes. That is in fact the case.

Yes, you do. Even if you don’t have any ranks in that trait yet, you will effectively get 1 rank if you use a Relic that has a +1 in that trait.

Question for the Queue: By freeing Odyn, have we potentially set ourselves up for a “Gearmaster Mechazod” situation, but on a (cough) taller scale?

I could see a situation where Odyn declares war on humans based on:

1. Humans are cursed Vrykul.
2. Humans are demonstrably useful.
3. If worthy Vrykul spirits can be put back into Stormforged bodies, why not worthy Human spirits?

So my question is, could we be facing Two Bosses Enter: Odyn vs Stormwind?

When you’re playing as a Warrior, you end up dealing a lot with Odyn for obvious reasons. Namely, the dude is always there. When you get your Artifact Knowledge up to max and you get your Fury Artifact leveled up, one of the things Odyn’s own chronicler says to you is that you’ve proved Odyn wrong and he now realizes the value of the mortal races of Azeroth.

Sure, Odyn is a colossal tool. I mean, seriously, the entire situation with Helya is his fault — his adopted daughter said ‘Dad, I don’t think this is a good idea’ and so he forced his terrible idea on her. Anyone who’s ever been a kid knows how that’s going to shake down. I frankly hope Helya makes a return — perhaps she has already set up an escape route for her essence and will pop up having made a pact with Sylvanas to possess her body or something.

But Odyn was also the Prime Designate (still is, I guess) and he helped lead the war effort against the Black Empire when the Titans sent the Titan-Forged to save the nascent Titan within the planet from Old God corruption. So he does have the ability to make good decisions in there somewhere and I’d like to think he’s not dumb enough to pick a fight with the same people who just saved his bacon and proved their worthiness like sixty times.

So I’m going to because the alternative is that I’ve been working for a big idiot this whole time.

Obsure Q4tQ: Has anyone ever seen a (canon, so non-RPG) reference to female tuskarr anywhere? Any Kalu’ak quest giver mentioning a wife or daughter or something in passing? Utaik mentions “brethren”, “families”, “relatives” and “cousins and children” in “Preparing for the Worst” but not explicitly any females.
We know there are female ogres, gnolls, kobolds and reportedly even grummles, so it’s a bit odd that I can’t remember even seeing any off-hand comment even implying the existence of female tuskarr anywhere.

According to Wowpedia, there are voice files in game for female Tuskarr (voiced by Lani Minella who has done a lot of voice work for Blizzard) and I’m pretty sure these are those voice files. But in terms of any in game appearances by Tuskarr females or anything like an explicit statement that they exist, no. The fact that Blizzard had voice files for them but then didn’t make a new model for them is not surprising, but it’s a bit disappointing.

I should point out that all walruses have tusks, so for all we know, we have seen female Tuskarr. There’s no reason to assume the females look all that different from males.

Piggybacking off my response to Pepe’s question, a language Q4tQ:

Would you like to see a bit more language barrier problems come up in quests? We all know that some words and/or concepts don’t translate well from one language to the next, so naturally that would be the case in WoW as well. I was thinking it could be interesting to see some of that come up in quests. Not so much as to be a detriment to questing, but enough that it feels more like everyone’s coming from their own language and background.

I’d imagine there would have been a language shift between what the Nightborne speak and what our more well known night elves speak (so if Nightborne ever became a playable race, they’d have their own language).

Even between Gilneas and Stormwind, I’d imagine a difference in what words mean what, to say nothing of the accents (there’s been stuff posted online about how southerners dialect sounds closer to old english accents than current english people speak).

Gnomes probably have a load more words for technology that just doesn’t translate well from gnomish to common.

We saw with the ravenkin quest (may Elune watch over their souls) that it’s possible to do a quest without speaking the language of a race, through a series of gestures.

It’d be fun, I think, to explore that more. Say, have quest text broken up as the quest giver just struggles to find the right word in common (for alliance) or orcish (for horde) to describe what it is they want.

There’s room for some of this. I think it’s justified that we don’t see it a ton in game because of three things. First up, I can’t imagine people who had access to actual magic not using it to aid communication. I’d think a translation spell would be one of the first things you came up with. Second, while a lot of these languages have changed over time (and that’s pretty realistic… look at the differences between say, Spanish and Portuguese, which both evolved on the same peninsula at around the same time but were regionally quite distinct, not to mention all the other languages of the Iberian Peninsula like Catalan which still exist today) I think having a game world where nobody could ever speak to each other would bog things down a little too much. Third, though, I think comes down to the nature of some of the races in question.

For example, when we say that Thalassian, Nazja and now whatever the name for the Nightborne language is (Shalassian?) have changed over 10,000 years, we’re still talking about people who themselves live that long in many cases. One assumes that Elisande can still understand Tyrande if they ever have a conversation, because 10,000 years ago both lived in Suramar. Similarly, Azshara can still talk to Malfurion, because both were and are contemporaries, even if the day to day language they use is different. Similarly while Velen speaks Draenei and Kil’jaeden speaks Eredar, they can both converse because 25,000 years ago they both spoke Eredar without Legion influence.

What does this mean for your character? Well, while a Night Elf probably can’t understand Thalassian immediately, he might be able to work it out if given time to listen, similar to how a speaker of Occitan might be able to make herself understood to a speaker of Catalan. (However, there are significant barriers between these languages.) Ten thousand years is a long time even for an immortal race, after all. I have a hard time remembering Latin and I took that a mere twenty years ago. If everyone around you speaks in a certain way, and you adapt to that change, you might well forget how to speak in older ways.

So I could imagine that Shalassian speakers have a lot of words for magic and arcane power that are gone from modern Darnassian but which might survive in an altered form in Thalassian, since both Shalassian and Thalassian would be more concerned with those concepts and both derive from Highborne culture, whereas modern Darnassian is a language shaped by Druid and Priest groups that rejected the Arcane.

This is a roundabout way of saying that I’m interested in the idea. We know that all Titan-Forged races once spoke a single language, and now that language has descendants in Gnomish, Dwarven and the Common language, but how close are these? One assumes a great deal of drift as the Curse of Flesh took hold. We could definitely have some fun with the idea of playing with language barriers in quests. What is Gutterspeak? Where did it really come from?

Blizzard Watch is made possible by people like you.
Please consider supporting our Patreon!
Filed Under: Language
Advertisement