Valeera and new Sandbox Mode live on the Heroes PTR 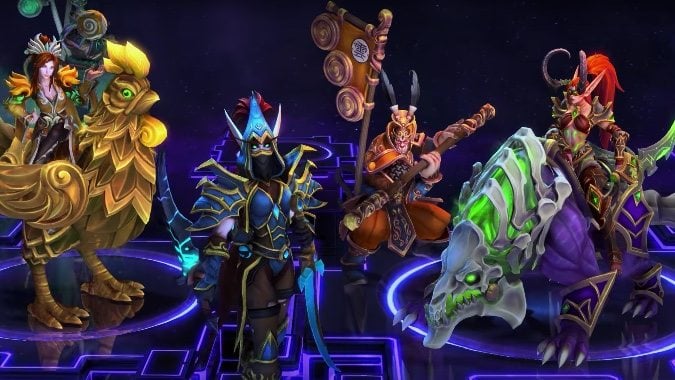 As promised, the Heroes of the Storm PTR is live today with new hero Valeera, our first in-depth look at her skills, and some other surprises. First up, the Lunar Festival, which we suspected would return this year, is hitting the game next week, and it’s all about rooster racing. (Yes, you read that right.) Completing 25 races will earn you the Lunar Rooster mount, and a golden version of the Lunar Rooster is available for gold only. Lunar Li-Ming, Monkey King Samuro, and the Nimbus Cloud mount, previewed yesterday, are also coming to the game with the Lunar Festival.

Then there’s a new Sandbox Custom Game Mode. It’s a version of Cursed Hollow that gives players access to a cheat menu, allowing players to alter game speed, increase player damage or health, instantly rebuild structures… and, well, just about anything else. It promises to offer some crazy gameplay that feels similar to some of the crazy options in Overwatch’s Arcade Mode. But when it comes to bending the gameplay rules, there’s a fine line between fun and frustrating, so we’ll have to see how this actually plays out.

And on the heroes front, there are small tweaks for Lunara, Varian, and Li Li, but complete reworks for Tassadar and Rexxar. For full details, check out today’s patch notes or hop on the PTR yourself once it’s live.

For a time, the gladiator Valeera Sanguinar served dutifully as one of Varian Wrynn’s personal bodyguards. Now, her shadowy skills find her a natural fit within the secretive rogue order, the Uncrowned, in their fight against the Legion.

PTR Note: Many of the following changes will not take place in the Shop until the Public Test Realm is brought offline and the patch is officially released to the live version of Heroes of the Storm next week.

Developer Comments:  These simple changes should allow Varian players to “live the dream” and get multiple Overpower triggers more often, particularly when combined with Live by the Sword or Twin Blades of Fury. We want Overpower to allow Varian to gain a lot of value when used at just the right time, and found even the best cases of the old Talent design didn’t compare to the other options on the tier. By also allowing it to increase the damage of Heroic Strike baseline, we think it will an additional vector that will make it an enticing option for all 3 builds.

Developer Comments:  We absolutely love releasing reworks and this one was a long-time-coming, as Tassadar has had a bit of an identity crisis from the moment he stepped foot into the Nexus. We knew that the design direction and changes were going to need to be a bit more expansive in scope compared to most of our other reworks, but we did our best to keep him as true to his High Templar heritage as possible. Our goals were to embrace him as a true utility-based support mage. The new “Distortion Beam” Basic Attack should allow you to help peel for your allies as well as secure kills that would be otherwise unobtainable. Plasma Shield has gained baseline utility that will continue to empower Basic Attackers, while also offering more diverse talents in order to better react to enemy and ally compositions. Archon has been surgically buffed and given a passive reset for Dimensional Shift which should be great news for our old-school fans as we fully expect to see a resurgence of back-line infiltration play. Overall, we hope the changes reinvigorate our steadfast Tassadar players while integrating many new ones into the Khala. En Taro Tassadar.

Developer Comments:  Our goals for Misha Rexxar were twofold: to streamline his control scheme as much as we could and to give his talents some love. All of Misha’s controls should now be centralized on the D button, which should make it easier overall to play the hero. While this does result in a tiny loss of control (Rexxar no longer has the ability to recall Misha to his side and to keep her in a passive state), we felt that overall this functionality was not that huge of a loss for Rexxar and was worth the gain of making his controls centered around one button instead of two. We also made Misha’s Movement Speeds during her various states more consistent so that she feels better when being commanded by Rexxar, and we’ve added some talents that should help better sell the fantasy of Rexxar and Misha working together to take down their prey. We’ve had a blast playing with the new and improved Rexxar, and hope that you enjoy it as much as we have!