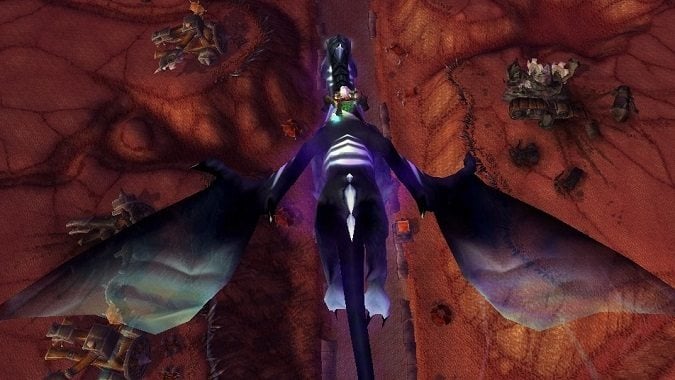 Just over ten years ago, Burning Crusade ushered in a brand new way to experience World of Warcraft that for better or worse would change the game irrevocably: flying. Flight paths had been all the rage when the game first launched, believe it or not. Players and reviewers alike ooh’ed and aah’ed at the experience, which was novel in MMOs at the time. But flight paths were just a teaser compared to the freedom and exhilaration of taking to the skies on your very own wyvern or gryphon.

Since then, an ongoing struggle has been waged between Blizzard’s desire to retain the sense of adventure and awe of discovery that flight tends to diminish, and players’ desire for the convenience of unfettered aerial exploration. Neither side seems fully happy with recent implementations. Even now, players are posting long thread after long thread on the general forums complaining about how flying is being handled in Legion.

Let’s look back at how flying — and Blizzard’s implementation of it — have evolved over the past ten years! 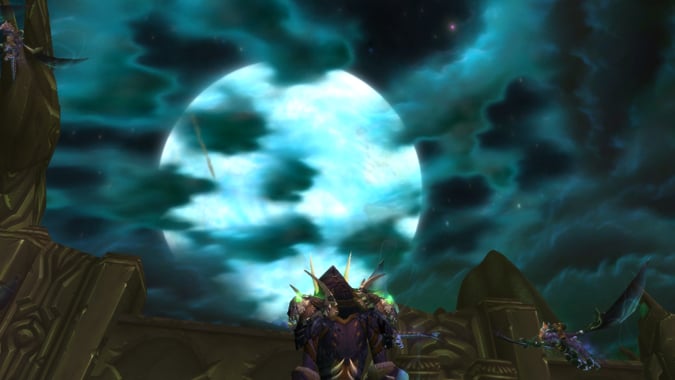 Players couldn’t fly as soon as they crossed through the Dark Portal. Many players couldn’t even do so after they dinged 70, when flying unlocked. Buying both the Expert Riding skill and your first flying mount set you back 1000 gold. This was no trivial amount in those days, and many players bankrupted their characters in order to fly.

Expert Riding was incredibly slow by today’s standards. Your flying mount moved at the same speed as a ground mount, a 60% bonus. In order to unlock “real” flying with its much greater speed boost (280%), you had to shell out 5000 gold for the Artisan Riding Skill and another 200 gold for the mount. Back then, each mount had a designated speed on top of the riding skill requirements. Many players couldn’t afford Artisan Riding until Wrath of the Lich King.

Once you could fly, though, it was so worth it. It’s hard to describe to newer players what it was like, after being tethered to the ground for more than two years. That sensation of flying over all those annoying mobs, of bypassing walls and landing right in the heart of enemy territory to carry out a swift assassination. Of rapidly moving from gathering node to gathering node to pocket a zone’s resources. And yes, of escaping from a sticky world PVP situation by simply taking off. Burning Crusade also offered a lot of endgame content that could only be accessed through flight, such as the Ogri’la, Skyguard, and Netherwing factions or the chance to fish up the ever-generous Mr. Pinchy. Flying offered so many advantages that it was no wonder Blizzard made it so expensive.

But even during Burning Crusade, Blizzard acknowledged that flying was potentially problematic for new content. The Isle of Quel’Danas, the last piece of major endgame content in the expansion, was a no-fly zone. Given the story and structure of the Isle, flying wouldn’t have worked there, at least not at first. But Blizzard has never turned on the flying switch for that area. This was merely a prelude to the restrictions to come. 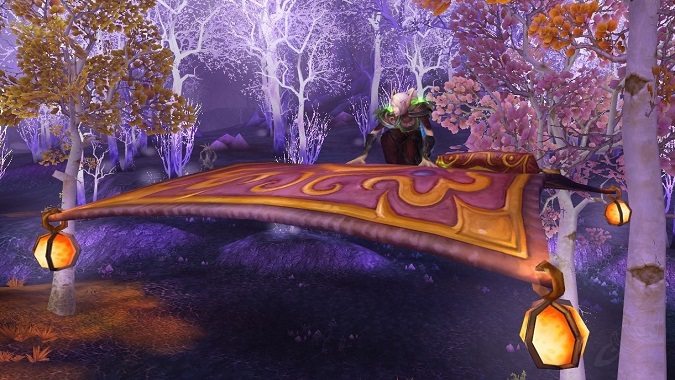 Now that the flight genie was out of the bottle, players assumed that Wrath of Lich King‘s Northrend would be accessible to flying mounts from Day 1. But Blizzard wasn’t so eager to let us take off. They took a position of compromise: players could fly after reaching level 77 by purchasing another riding skill called Cold Weather Flying. Northrend’s final two zones, Storm Peaks and Icecrown, were both designed with flying in mind. Storm Peaks had a heavy vertical component as we climbed mountains and delved deep into ancient Titan structures. Icecrown, the heart of the Lich King’s empire, had heavy fortifications and vast legions of undead that made travel on foot impractical. Icecrown also featured quest hubs on airships high above its frozen surface.

Players complained after the initial announcement of the delay to 77. Given the investment players made into flying, it wasn’t surprising. But looking back the delay made sense and players were generally accepting of the flight system in Wrath.

When Deathwing emerged, he destroyed classic-era WoW forever. Many players have never gotten over it. But there’s little double that one of Blizzard’s main goals with the Cataclysm expansion was trying to make good on one of the game’s most requested features: the ability to fly throughout all of Azeroth.

The original zones and cities had never been designed with flying in mind. Those zones had missing textures and structures all over the place that weren’t visible from the ground. Enabling flight in Azeroth required a massive redesign effort. Blizzard decided that if they were going to have to redesign the world, they might as well blow it up for real.

No feature in the game has even driven an expansion’s design as much as flight did Cataclysm. Because of this, Blizzard decided to allow players to fly in Azeroth before the expansion even launched. We could buy the Master Riding skill after the release of the systems patch and take in the destruction firsthand from the comfort of the air at maximum speed. While players were initially thrilled at the ability to fly in old Azeroth, many soon soured on the idea when they realized just how much of the old zones had been excised from the game.

Mists of Pandaria returned to the Wrath model: players had to buy a special flying skill, unlockable only after reaching a certain level, in order to fly on the new continent. This time it was called Wisdom of the Four Winds. Flying was banned in all of the “Isle of X” areas, just like in the Isle of Quel’Denas. 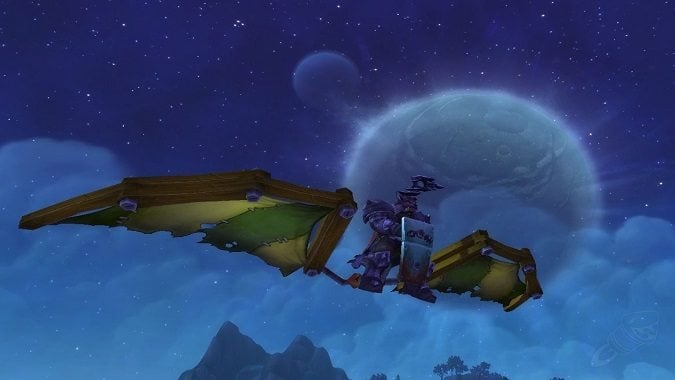 For Warlords of Draenor, Blizzard wasn’t sure they would allow flying at all. For a long time it seemed like we would never fly in Draenor without a Goblin Glider Kit. It was mighty ironic given that Outland, Draenor’s broken future, was the origin of the feature. Player backlash to this idea was heavy and constant, no more so than after Ion Hazzikostas announced that flying wouldn’t be enabled for patch 6.2, which was the final major content patch of the expansion.

Eventually Blizzard gave in and allowed flying, in one of the expansion’s final minor patches. But Blizzard wanted flying to be harder to obtain than just through leveling and purchasing an item. Their solution was the Draenor Pathfinder achievement, which required players to unlock and explore the vast majority of the expansion’s content on foot before allowing said player to fly above it.

It remains a controversial implementation, all the more so now that Blizzard has repeated that achievement-based implementation for Legion. Now that we’ve been grounded in the Broken Isles for five months, many players feel that it’s time we were able to fly again, especially given the World Quest system that requires so much travel. Patch 7.2 is bringing the second half of the Broken Isles Pathfinder achievement sometime later this year, but even then flying will be gated behind a brand-new faction as well as a host of other requirements.

Once Blizzard gave players the ability to fly, it seemed inevitable that they would have to take it away again in certain places and at certain times. Many players have been discouraged by the long wait to fly in recent expansions. Personally I find myself playing Legion less and less these days because I’m just sick of running all over the world to complete World Quests, especially on my main character. Criss-crossing the same terrain for months on end — especially the very uneven terrain of the Isles — is highly fatiguing and pushes me toward other games. The Flight Master’s Whistle, while better than nothing, is a half-measure that feels supremely unsatisfying compared to actual flight. World Quests have made flying more necessary than ever to prevent player burnout.

Will Blizzard continue to follow the “Pathfinder” model in the future? The pattern of the last two expansions seems to indicate yes. But with all things Blizzard, they never seem to do quite what we expect. It’s clear, however, that flying will remain a staple of the game, even if we have to wait longer for it than we would like.

Blizzard Watch is made possible by people like you.
Please consider supporting our Patreon!
Filed Under: Cataclysm, Flight, Flying, Pathfinder, The Burning Crusade, Wow Archivist
Advertisement