The Queue: RP Edition with Shivara the Death Knight 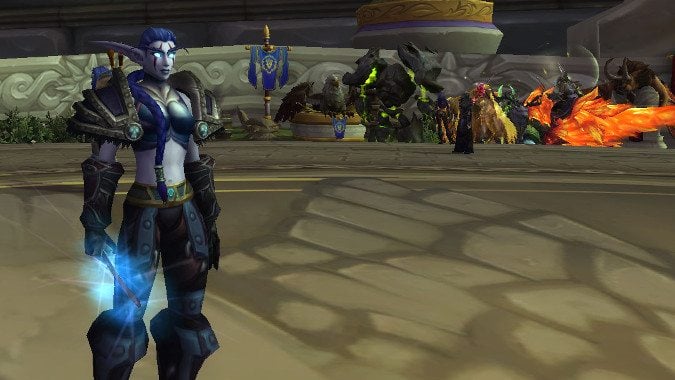 I’m Shivara. Some of my friends call me Shivs. I don’t think it’s a really suitable nickname, I mean, Rogues shiv people. I tend to hit them with a really big glowing sword or axe or what have you. But yeah, I’m a Death Knight. It’s nice to meet you!

What? Oh, right, the whole ‘suffer well‘ thing. Look, I get that everybody over at Acherus is super into the whole ‘we are the damned, bound to the world by chains of our own misery’ deal, but the thing is? I go out and I make other folks suffer so I don’t have to. That’s pretty much all I do. Legion demons, crazed constructs, some kind of time monster… I put the hurt on them and as long as I keep doing that, I feel just fine. And it’s not like we’re in danger of running out of targets, as soon as we get done with the Legion I’m sure some new beasties will be lining up to get my evil monster axe right in the face.

So yeah! Let’s all have fun in the Queue today. You all seem like fun types.

Well, let me first say, I’m not super into the past. I mean, the past is past, right? It happened, we’re here. I mean, sometimes, I remember before I died and that… well, I have to go and smack some demons or Feltotems or whatever around for a while because that hurts and believe you me, life is too short to deliberately hurt yourself. I know.

But I went and checked it out and it seems like there’s a lot of details about what’s coming in this book. There’s more information about Medivh, details on the history of Draenor and the First and Second Wars, and if you want to know more about where Draenei come from or how us Death Knights came to be (including some stuff about the OG himself, Teron “I killed him for his Axe” Gorefiend) that and more will be in there. If you’re the type who likes looking back, this sounds like something you’d dig.

Daglop the imp from Azsuna, he says something about his (or her?!) ancestors in Azeroth, who are not part of Legion, any guess who they are?

Grell? I’m going to bet it’s Grell. You know, back when I was a…

Oh. That was before me.

No, no, it’s fine. That stuff’s gone. It can’t hurt me. Anyway, Grell! Yeah, little jerks. They’re some kind of nature spirits, I guess? I was never really very good in Druid school.

No, I wasn’t a good Druid. Or I wouldn’t have died.

Grell are kind of like even more jerk version of Sprites, who are also jerks. I’m not sure if they’re actually related or not. My old Shan’do might be able to tell you. She’s in Val’sharah now.

I didn’t talk to her when I was there. Kept my helmet on. Better she not know. She’d be upset. Most of my people get upset, and it’s not worth telling them I’m fine with who I am now. Better to just keep the helmet down and act like I’m not anybody when I see someone I knew.

Besides! The past is in the past, like I said. I’m Shivara now.

a 2BE for the commenters

Well, okay, I’m not a commenter and I dunno who Xul is (cool name, though) but Kel’Thuzad is a big deal aroudn Acherus. Even now some of the old timers like Darion (I can call him Darion, we’re buds, he and the other Horsemen show up all the time when I’m out and about) are always worried he’s going to show up again. And I can see why, cause I wouldn’t have died if not for that guy.

Yeah. I totally died during the first Scourge Invasion, when Naxxramas came down and was hovering over the Eastern Kingdoms. Turned out I was a pretty terrible healer! Wow, I haven’t thought about that in years.

I’m pretty good at standing in front of monsters with a giant axe and keeping them too busy to go after that Dwarf I hang around with. She’s always very upset that we’re in danger and might die. I tried to explain that I did that already but she doesn’t listen.

Anyway, yeah, Kel’Thuzad’s a serious name in abominable undead monstrosity making. Whoever that Xul fella is he’s going to need to bring his A-game to take on the big K. Remind me to ask the Lich King (no, we’re not there yet, he’s still not that friendly) if Kel’Thuzad is really, really dead.

Why did anyone listen to Vol’jin?
He was dying of fel poisoning and just because he’s a troll they believed he was seeing and hearing actual Loa spirits?
LOL!
He was probably hallucinating as the fel warped & twisted his mind. In his late madness he declares that Sylvanas is to be the Warchief and everyone just says “okay that’s fine”?

Okay, so, I should preface this by saying that I do not like Sylvanas Windrunner. She kidnapped a member of my order and held him for years, tried to break his will as if, we’re Death Knights, we know how to suffer better than anybody and she tried that weak sauce torture stuff on my boy Koltira? Uh-unn, you may be even deader than I am, but the Deathlord does not play that.

So yeah, I went into her city and I took my boy right back out and I am not even a little bit embarrassed by that. If the Warchief has a problem with it, she knows where Acherus is. And I could arrange for it to be somewhere else after the Legion gets stomped. Like, say, raining death down on Undercity. Although to be honest it’s kinda hard to do an aerial assault on a city that’s mostly underground now.

But I digress. Like I was saying, I am not a big fan of the deader of the Windrunner sisters. But honestly, seriously, who else was there? Baine’s just a kid. Brave, strong, and growing into the job, but he missed the Third War and most of his time since becoming leader of the Tauren has been him growing into the role. In ten years? Maybe. Right now? Not so much. And Lor’themar is just a less experienced version of Sylvanas. Seriously, he was her second in command during the Scourge Invasion. He’s only alive because she deliberately sent him and others away and made a desperate final stand to buy time to evacuate what could be evacuated.

Nothing against either of those two, but seriously, neither has Sylvanas’ experience. Neither has her power base, either — neither the Tauren nor the Sin’dorei are as frantically loyal as Sylvanas’ Forsaken. As a Death Knight, I respect the Forsaken. I understand a bit of what drives them. I try not to let myself go over the edge into full on ‘what are we if not slaves to this torment’ moping, but I get it. I have that inside, it’s what pushes my cold body forward. We Death Knights know a thing or two about suffering.

Sylvanas is just the obvious choice. She’s fought a war against a nearly unbeatable enemy and she experienced treachery from one of her own that cost her the victory. She’s made that a part of her. I don’t appreciate her deciding one of mine was one of hers, but we can have that talk after the demons are beaten.

Then we’ll see how well the Warchief can suffer.

So, it occurs to me that Stormwind is running out of heirs to the throne. Who is “available” to hook up with Anduin and provide the Kingdom with a future King/Queen?

For one thing, I’m dead.

For another thing, Humans are like goldfish. You get attached, and then they’re dead. Just look at Varian. I just learned that guy’s name and now he’s dead! And I couldn’t even make him one of the Four Horsemen. Believe me, I definitely lobbied for that.

From what little I know about Humans, I’m pretty sure Anduin’s mom wasn’t a Princess, just some random noble from Stormwind. I’m sure there are plenty of women in Stormwind who’d work out.

I thought Anduin was dating a dragon or something anyway? Oh, who knows with Humans. 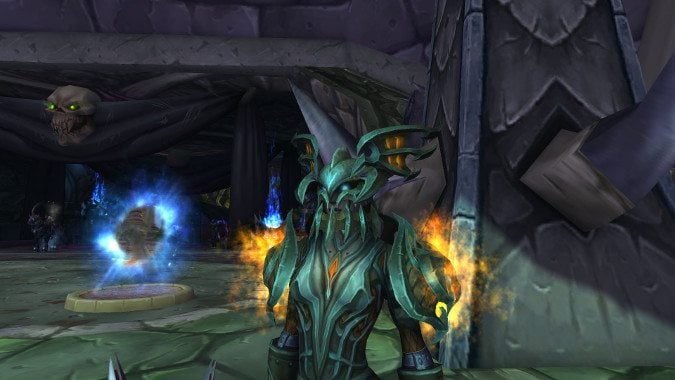 Okay, that’s a good place to stop I think. Thanks for having me! I don’t really understand why I had to write these weird scrolls and throw them through that portal to ‘Dirt’ (which is a weird name for a world but then again I’ve been to Draenor and that place wasn’t even named by the people who were from there, so who knows) but I hope y’all are safe from the Legion.

And please, suffer well. It’s the best we can do sometimes.

Blizzard Watch is made possible by people like you.
Please consider supporting our Patreon!
Filed Under: Death Knight, Role Playing, Rp
Advertisement