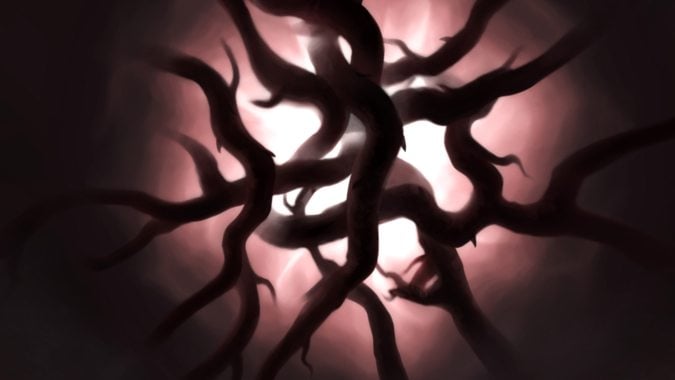 I think my favorite part about the Xavius encounter in Emerald Nightmare is the distinct lack of…anything. That blank, gray nothing is somehow more terrifying than any hyper-rendered environment we’ve been plunked into over the years. I particularly like how the ceiling is just a vague criss-cross of something that might be branches, or vines, or any number of wholly unpleasant things. It’s just blank enough for your brain to self-insert all kinds of horrible things that might be lurking just out of view.

So what happened with cross realm email? I have a guild with toons on 2 different server and no matter how I try to send them in game mail, nothing goes through unless it is a bind on account.

You can only send mail across realms in two situations — either you’re mailing a Bind-on-Account item, or the two realms you’re mailing between are Connected Realms. In either case, in order to send the mail, you have to specify the realm name of the character you’re sending to, in the format “Charactername-Realmname.” If the realm name has more than one word, eliminate the spaces (ie, Black Dragonflight becomes BlackDragonflight, Sisters of Elune becomes SistersofElune, etc.)

Cosmetic skin idea, Nightborn for NE’s, Brown for Orcs, any off shoot for Tauren, etc.

While I agree that it would be nice to see more customization, I almost think that the Nightborne are such an ecologically distinct race at this point that they could be a playable race on their own, rather than a cosmetic choice. The Nightwell fundamentally changed what they are, similar to the differences between Night Elves and Blood Elves. And they’ve got ten thousand years of isolation, a pocket of history we’ve only just begun to look at.

Since they were helped by both Alliance and Horde, I could see them as a neutral race like the Pandaren, where you choose your faction after an introductory experience. It’d be neat!

…let’s face it, I just want to see Suramar used in future expansions instead of being tossed aside.

Q4TQ — Why Lucio for the newest character in HotS? Is it because HotS needs his type of heals now for balancing the classes? Is it for more Overwatch marketing?

Heroes of the Storm utilizes heroes from all of Blizzard’s titles. Overwatch is the newest of those, but it’s still a Blizzard title. That’s kind of…you know, the backbone behind the whole loose premise of the game — all these heroes are pulled together in this weirdo Nexus place.

And they did need more support choices. Lucio’s toolkit is a pretty fun mesh of healing and mobility — he’s not a clone of an existing support. He’s got some unique gameplay and a bunch of awesome beats to drop. Sounds like a winner to me!

Q4TQ: If you’re going to use a voice program to talk to people while playing, what do you use? Are you always looking for the latest and greatest like Discord or are you staying old school and sticking with your Ventrilo server?

I’m not actually in a raiding guild anymore, so I don’t really have a use for voice chat. But back when I was still raiding, it was usually either Vent or Mumble for voice chat. Discord hadn’t really become a big thing yet. These days, the only time I’m really using voice for communication is on the live streams, and we just do a Skype call to talk to each other — the voice quality is better for streams that way.

What is Peddlefeet? I know he is a goblin in a Cupidesque guise. But I mean, what is he? Can other goblins do this, or he is one of a kind? Is there some ancient mythology in Azeroth where these cherubs exist?

I have a feeling Peddlefeet isn’t that guy’s original name. He feels a little like a Goblin marketing tactic gone horribly wrong. “Hey buddy, we’re going to dress you up and make you fly for this promotion we’re doing! We’ll make a mint! Don’t worry, we know what we’re doing, the changes aren’t permanent.”

Cherubic figures have been depicted in art before — if you look at the ceiling of the Karazhan opera house you’ll see some. I don’t know if it’s common mythology or not, though — it’s never been explained, lore-wise. It’s just cool visual stuff that’s been thrown in.