Last week we discussed Quel’Thalas from its foundation to the beginning of the Troll Wars. The enmity between Trolls and Elves is long standing and innate, dating back to the distant past before the Sundering when the Kaldorei Empire, led by arcane spellcasters, defeated both the Gurubashi and Amani Trolls and seized control of huge swaths of formerly Troll lands in the process. The Well of Eternity became an Elven lake, and the Kaldorei ruled as much of Kalimdor as they desired or felt was worth conquering. The Trolls never forgot or forgave this, so when the Highborne came to what is now Quel’Thalas and created the Sunwell (completing their change from Highborne to High Elves in the process) the Amani were far from welcoming neighbors.

Still, it took them a very long time, many thousands of years, to come up with a counter to the powerful magic of the High Elves. Quel’Thalas endured for century after century, the spires of Silvermoon and the forests of Eversong fully under their control. The Trolls held much of the Eastern Kingdoms, though, from mighty Zul’Aman to the lands south, including territory in what is today the Plaguelands, the Hinterlands, the Arathi Highlands, and even Alterac. Trolls didn’t just make war on Elves, either, but fought among themselves, attacked Dwarf and Gnome settlements, and more and more often fought an upstart race of barbaric warriors who called themselves Humans. And it would be this upstart people, the same ones that had sheltered the High Elves when they first arrived on the Eastern Kingdoms, who would end up having a profound effect on the destiny of Quel’Thalas. 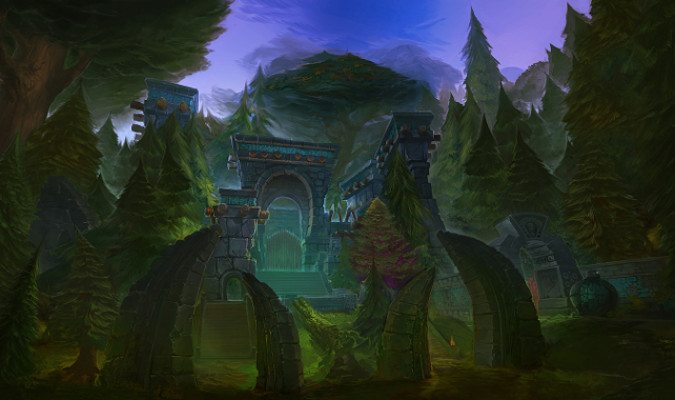 It was the Zandalari who were ultimately responsible for the Troll Wars. Having seen their people’s fortunes decline time and again at Elven hands (even the Sundering itself was an Elven disaster, as far as the Zandalar were concerned) and not having forgotten the ancient rivalry that saw the two great empires dispatched, the Zandalar saw the Amani resurgence as a chance to reassert Troll dominion over the world, starting with the Eastern Kingdoms. They picked an Amani warlord, Jintha (the one Jintha’Alor is named for), and supported him against his rivals, correctly foreseeing that with a single leader, the Amani could at last mount a challenge to the High Elves that had driven them out of Eversong.

They also introduced the Amani to ancient Loa long forgotten by the forest trolls, as the Zandalari culture was the oldest of the Trolls. These beings, wild gods of a sort, could allow the Amani to at last match power for power with Silvermoon’s best.

At first the High Elves, ruled by their young king Anasterian, underestimated the threat. The Trolls raided Elf lands, testing their defenses, probing for weaknesses. And they liked what they saw. Soon, the Amani under Jintha felt the time had come for total war, and they unleashed a wave of slaughter as whole Troll armies erupted from Zul’Aman hungry for revenge for thousands of years of losses at Elven hands. And revenge is exactly what they got — with the power of the Loa and their vast armies, they quickly drove the Elves back from the southern reaches of Eversong (what we today call the Ghostlands) and looked to overwhelm them. As powerful as Quel’Thalas was, as mighty as the magic of the Quel’dorei was, it was a paper tiger. The Trolls had changed and grown and developed. The Quel’dorei had stagnated, pretended to be heirs to the glory of the Kaldorei Empire, preened about their mastery of magic and in the process had not learned a new trick in thousands of years.

Anasterian knew that without aid his people were doomed. And he also knew that the Trolls wouldn’t stop at Quel’Thalas — once Silvermoon fell, once the High Elves were dead, the Trolls would expand again. The Zandalari dream of Troll hegemony was unchanged from the days when Trolls warred with Aqir and split themselves into two empires in the process. If the Zandalari could ally with the Amani and menace his people, Anasterian needed allies of his own. 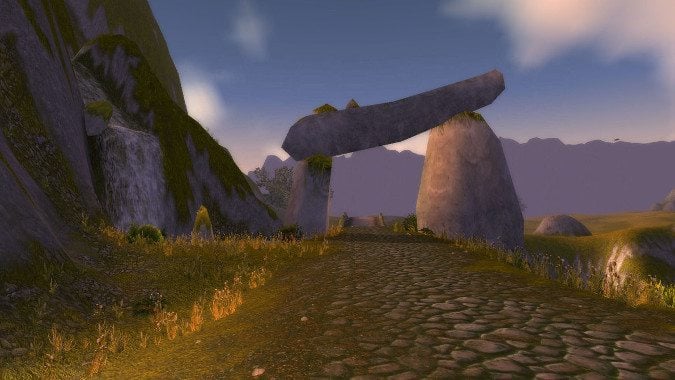 Anasterian was no fool, and he treated the Humans with cautious reserve, much as they had in witnessing the Troll attacks on Quel’Thalas. Thoradin had only managed to unite Humanity fairly recently — before his rise to power they were divided into tribes like the Arathor, the Alteraci, and others. General Lordain, one of the King’s most loyal advisors (and a descendant of the same people who’d welcomed the Elves to the Eastern Kingdoms several thousand years earlier) had been watching the expansion of the Trolls with alarm, and urged his king to consider the alliance. But Thoradin was reluctant.

He and his people stood to lose much in helping the Elves, and furthermore, Thoradin wasn’t at all sure of his people’s chances if they joined the battle. By all accounts the Trolls outnumbered his people greatly, and their Loa demigods made them a formidable threat. It would take more than strength of arms to defeat them.

Anasterian found himself faced with a decision. Thoradin knew of Elven magic — over the years the legend of their arcane might had grown among the other peoples of the Eastern Kingdoms. Thoradin’s people did not have such magic, and he realized that in order to counter the Trolls they would need it. And so he named his price for coming to the Elves’ aid — 100 Humans would be trained in the magic of the Elves. Anasterian didn’t really want to do it — he was leery of the risks of allowing Humans, a barbarous people, to repeat the mistakes the old Highborne made. But the simple fact of the matter was, he had no choice. For the High Elves to survive, they needed allies, and a cadre of 100 new spellcasters might help turn the tide of the war. He agreed.

There really wasn’t much time to decide. Those 100 Human mages were just barely trained (and their Elven tutors found them terrifyingly quick studies) when Jintha decided to make an end of the war and led his vast army to the very gates of Silvermoon. The High Elves fought valiantly but were doomed, and they knew it. Jintha gloated at the prospect of reclaiming all that had once belonged to the Amani and, in time, perhaps all that had once belonged to the Trolls of the distant past. He could imagine an empire spreading across the globe, even crossing the waves and seeking out the remnants of Kalimdor itself.

What he didn’t imagine was the appearance of Thoradin’s army.

Thousands of Human warriors hit Jintha and his Amani in their back ranks, and the Warlord of all Amani turned his vast force with one directive — annihilate the upstart Humans once and for all. Trolls and Humans had been squabbling for territory and power for years, but the battle with the Elves had seemed more pressing. Now Jintha was driven into a fury at the idea that the Humans dared to interfere in this moment of triumph. He would crush Thoradin and his army, drive them into extinction, and then return to Silvermoon and do the same to them.

Just as Thoradin had intended. 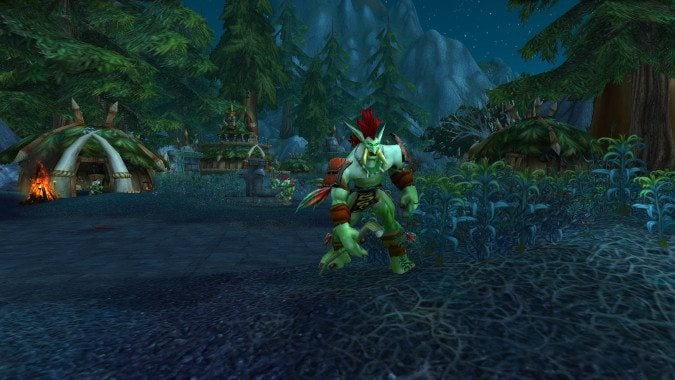 The Humans retreated, giving ground to Jintha’s larger force. They retreated through Eversong, through Lordain’s homeland, through the Hinterlands. All the while pursued by the Trolls, who were goaded into a frenzy of hate by Jintha. Empowered by the loa, supported by the Zandalari, the Amani believed themselves unstoppable. Had they not driven the Elves before them? Were they not doing the same to the Humans? Yes, the Elves were harrying their flanks, but what of it? They’d beaten the Elves, and they would beat them again.

Thoradin kept the Trolls goaded by allowing just enough conflict between his forces and Jintha’s to keep the warlord focused. Finally, in the Alterac Mountains, he and Anasterian sprang the trap they’d so carefully led the arrogant Jintha into. Thoradin’s forces wheeled, charging full into the Troll lines. Hidden armies of Elves raked the back ranks with arrows. The Trolls massed, prepared to use their superior numbers to crush their enemies once and for all as Jintha rode hard for Thoradin.

And those 100 Human mages, along with more from Anasterian’s Elven forces, incinerated thousands of Amani in one second. Warlord Jintha was among them, dead in a heartbeat, before he even had time to realize what was happening. The invincible Amani army broke on the slopes of the Alterac Mountains as Thoradin and Anasterian crushed the demoralized remnants and ended the resurgence of the Amani in one afternoon. 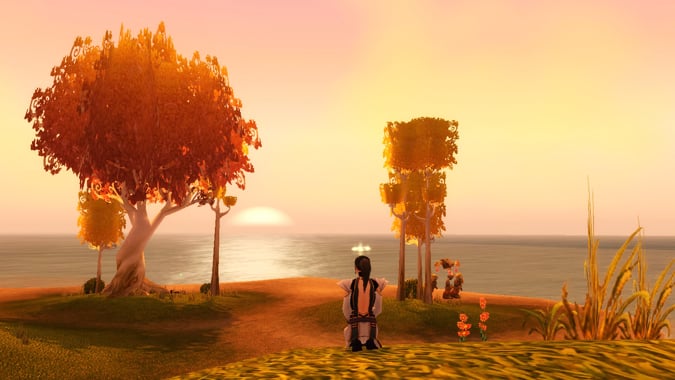 Anasterian wasn’t blind to reality. Despite what they’d gained — access to the ancient magical secrets of the Highborne themselves — the Humans, and especially King Thoradin, had taken a massive risk in attacking the Amani. The Trolls had vastly outnumbered Thoradin’s army, and the king had personally led his forces into battle. As a result of this battle, Anasterian swore an oath to one day repay Thoradin’s bloodline by coming to their aid in a similar manner. He also began what would become the Kirin Tor, as Human and Elven Mages worked together to keep magic in check. Without Anasterian’s cooperation it is unlikely Dalaran would ever have existed.

But the Elves finally realized the truth — no matter how much they preferred their splendid isolation, Quel’Thalas was no longer a kingdom in full summer. The sun had not yet set, but it was beginning to descend. In his lifetime Anasterian would see the end of his kingdom, the deaths of most of his people, and the destruction of the Sunwell by the hands of a Human, and then he would die as well. The Sunstrider dynasty itself would barely last a decade after his passing.

But what was he to have done? Had he not made the pact with Thoradin, his people would likely have died at the hands of the Amani more than two thousand years earlier. For all his gifts, Anasterian Sunstrider could not see the future.