The Queue: Breaking the Shore 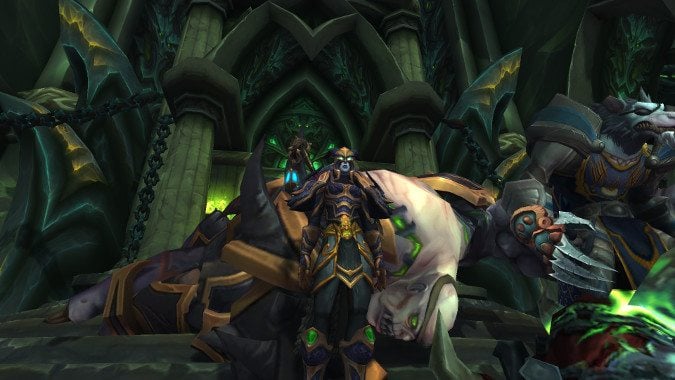 What, these? They were dead when I got here, really.

Love anti-heroes illidan, vegeta, Raphael. Angry and misunderstood you got me. Can a paladin be be anti- hero? What classes can or can’t?

If you want an example of a Paladin as an anti-hero? Batman.

Think about it. Batman has a rigidly defined moral code that won’t allow him to kill, even when it would clearly be the right thing to do (the Joker) and he’s worked alongside Commissioner Gordon for years. Batman is a prime example of a morally upright, justice obsessed crusader who defeats evil and brings retribution.  So yes, a Paladin could be an anti-hero. For a Warcraft example, Gavinrad the Dire was a no-nonsense take no pris0ners sort in life, and he only got worse after he died.

As to what class can and can’t be an anti-hero, I don’t think there’s any class that couldn’t manage it. Clearly Demon Hunters and Death Knights are almost required to be such, but we have plenty of room for brooding Priests, vengeful Monks (Daredevil works here), angst-haunted Shaman, sinister Rogues, and so on. I really can’t think of a single class in WoW I couldn’t justify an anti-heroic approach with.

Are the scourge more powerful under Bolvar? He’s obviously a threat but is there evidence he is more or less powerful then Arthas?

I don’t think it’s as easy as ‘more powerful’ or not. Bolvar is a very different Lich King than Arthas was — for one thing, he’s much more focused on goals instead of Arthas’ almost monomaniac focus on proving that other heroes would have failed and fallen to darkness as he did. Everything Arthas did in Wrath was oriented around luring a force of Azeroth’s most powerful heroes to Icecrown and breaking them to his will to serve as powerful generals for the Scourge. He deliberately created a kind of interlocking series of gauntlets, and willingly sacrificed many of the Scourge in the name of this ‘plan’ that was ultimately more about proving himself right than anything else.

Bolvar never had Arthas’ doubts. Arthas fell to corruption and became a Death Knight in the first place because he was faced with an evil so overwhelmingly vile that he couldn’t see that the steps he was taking to fight it were leading him to his own destruction. Bolvar willingly had Tirion put the Helm of Domination on his head not because he sought power, but because he sought to achieve a goal — the confinement of the Scourge.

It’s worth noting that in at least one alternate future, the Lich King rises from Icecrown in a new, more terrible aspect that dwarfs Ner’zhul or Arthas and devastates Azeroth. In that future (foreseen by Velen himself) Azeroth is left a lifeless, blasted landscape dominated only by death and when the Legion returns they delight in playing with the corpses.  Again, that’s less about power per se and more about personality. A Lich King like Ner’zhul or Arthas is hobbled by the person who they were before — Ner’zhul sought power enough to be free of Kil’jaeden and was obsessed with the Legion, while Arthas sought to demonstrate his hobbyhorses and bent the Scourge to lure heroes to Northrend instead of invading in force. If Bolvar ever decided to conquer Azeroth, he’d do it with a lot less of their restraint because he doesn’t suffer from their psychological issues.

In essence, Bolvar is not more powerful than either previous Lich King, he’s simply more pragmatic. Ner’zhul was a Shaman, an elder seer, and Arthas was a Prince. Bolvar was a general and a regent — he knows about leading, about tactics and strategy, and about putting his ego aside to accomplish a goal.

I hope Sylvanas never goes away. She is one of the most interesting characters in WoW.

Going back to War Crimes, Sylvanas’ design for her sister is horrific. She fully intended to deceive Vereesa and kill her in her sleep, in order to raise her as a banshee like herself. But she didn’t do this out of malice. In fact, the story shows very clearly that Sylvanas is almost tortured by how quickly the love she once felt for her sister comes roaring back once they spend any time together. She compares it to a phantom limb twitching — she knows she can’t be feeling it, and yet, there it is and when Vereesa decides not to abandon her children Sylvanas is driven wild by the pain of her loss.

Similarly the way Sylvanas seeks out Nathanos and frees him from the Scourge and the recent revitalization of the Blightcaller is absolutely another case of Sylvanas doing a monstrous thing (no spoilers, go read the story) but out of very relatable reasons. In many ways, undeath is worse for Sylvanas than it is for most of the Forsaken because she can still feel to a much greater extent than they can, but she’s still a moldering corpse without the ability to truly understand what she’s doing. Everything Sylvanas does is warped by her ordeal, her death at Arthas’ hands, her being forced into becoming what she is today.

So yes, I think she’s interesting. I’ve often thought the worst possible thing that could happen to Sylvanas wouldn’t be death, but rather resurrection. A living Sylvanas couldn’t possibly cope with what happened to her, or what she’s done since.

Since the leveling dungeons in Legion is so heavily involved in their respective zone’s storyline and the fact that once Legion is over the queue times for these dungeons will undoubtedly increase by a lot, how would you feel about doing a solo version of a dungeon similar in difficulty to any solo scenario?

SWTOR has done something similar with their [STORY]Flashpoints, where if a flashpoint (dungeon) is relevant to the story it will have a very easy version for the player to solo just for the story and some slightly better than average loot.

I would not be against making these kinds of versions of Eye of Azshara, Darkheart Thicket, Neltharion’s Lair and Halls of Valor.
In the future ofc, once Legion is over and done with, just to not have new players or alts miss out on the Pillars of Creation storyline.

I could see them doing scenario versions of those dungeons. I’m not saying they will — I think it’s more likely they’ll be slotted into the Timewalking schedule, as with Black Temple as a Timewalking raid I think we’re seeing Blizzard embrace the mechanic and working to expand its role in the game’s future — but it could be a cool way to keep older content somewhat relevant.

Honestly, I’d like it if they’d put scenario version of current dungeons in when they launch a new expansion. So when Rage of Argus launches (that is absolutely not going to be the title of the next expansion) with six leveling dungeons and two mythic only dungeons at start, each of them would have a scenario version so you could see the story. That would be very cool. I don’t expect that to happen either, but I would like it if it did.

But seriously, he kind of has a point. There are notable Draenei (I would list Velen, Nobundo, Akama, Yrel, Ishanah, the Exarchs, and of course my favorite Divinius who I am convinced is our universe’s version of Yrel’s sister Samaara. But compared to other Alliance races, there haven’t been that many notable Draenei and many of them are dead now, including Maraad, our universe’s Maladaar and Iridi.

This is not me saying I wouldn’t love to see some Draenei in Heroes. I absolutely would. And I think Akama or Maraad would be good choices (I mean, Maraad’s dead, but so’s Varian and he got in) but I understand why Overwatch is the new hotness right now.

Okay, that’s the Queue for Friday. I’ll see y’all next week. In the meantime, Anne’s up next so ask her lots of questions about Wrathion, she likes that guy.

Blizzard Watch is made possible by people like you.
Please consider supporting our Patreon!
Filed Under: Divinius, Draenei, Sylvanas
Advertisement